In November last year, 72 cats and kittens were rescued and brought to the Nova Scotia SPCA for urgent medical care. The majority of the cats came from two animal hoarding situations in Pictou County and Cape Breton. Because of the conditions the cats were living in, many were suffering from painful eye damage, severe infections and deadly diseases. Some needed emergency surgery to survive. Proudly no-kill, the SPCA did everything possible to help them. But they couldn’t do it alone. Their shelters were overwhelmed and resources were stretched to the limit. Compassionate animal lovers from across Canada generously donated to help cover the cost of their care and long journey to recovery.

She was among 21 of these poor kitties that were treated at the SPCA’s Colchester Shelter. The Shelter named her Rain. Eventually, Rain made a full recovery and on December 18th, she found her forever home.  Her adoptive mom Lou Harrington filled me in on her fur-baby’s fascinating, often hilarious, life. 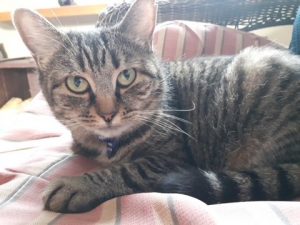 “It had been 5 years since my beloved Lester died and I finally felt ready to have another cat in my life. I visited the Truro Shelter, determined to adopt another boy kitty. I spent time with the boys, talking to them and petting them, and then an SPCA staff member told me that there were more cats in the next room. I went in, sat on a bench and a kitty named Rain immediately came up to me. When I lifted her up, she started purring and kneading biscuits on me. I was a goner. I guess you could say that she picked me,” shared Lou.

Rain adapted well to her new home. “She was very vocal when she wanted to be fed – she had one volume setting and it was LOUD!” Said Lou. “In a week, she was sleeping with me.” Lou decided to re-name Rain Isabelle (Izzy for short) after their first week together. Lou explained “It didn’t really matter what I called her as she didn’t come to her name. At first, I thought she was just being a cat and ignoring me,” chuckled Lou. “But I later learned that she was actually deaf. Izzy’s deafness did have a silver lining – she isn’t scared of the vacuum, thunderstorms or fireworks.” 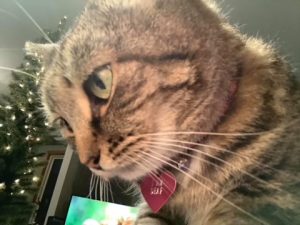 Since Izzy can’t hear, Lou stamps her foot so the vibrations will alert Izzy to look at her. “When Izzy’s being mischievous, I stomp and point my finger at her. She knows that the finger means to stop doing what she’s doing. Actually, being a cat, she thinks the finger means stop doing it while Mama can see her!” laughed Lou. “When I return home after being out, I stamp my foot, Izzy feels the vibrations and comes running to greet me.” Deaf cats learn differently but can give just as much love as any other kitty can. “Other than stamping my foot, I treat Izzy no differently than a hearing kitty,” said Lou.

Izzy’s an indoor kitty but finding her at times can be tricky. Lou found a great solution. “I bought a Tile Dot Tracker to put on her collar and have an app on my phone that makes it beep so I can locate her. She’s definitely a high-tech kitty!”

What’s a typical day like for Izzy? Lou related “Izzy loves to be near me and follows me around the house. She doesn’t play with toys, but she loves to chase the red dot of a laser pointer. Each evening, the dot appears and Izzy goes into stealth mode. She is positive she will catch it one day! She also likes to sleep a lot and prefers to be tucked up in her blankies. She rarely gets up before 10 am.”

Do signs of Izzy’s previous life ever appear? “Izzy is very food motivated,” explained Lou. “She likely didn’t get a lot to eat where she lived before. When I am cooking anything, she will hop up on a kitchen stool to ‘help’ me. She’s a very attentive supervisor and insists on being a taste tester! She especially likes my roast pork loin recipe,” laughed Lou. “Her favourite treat is scallops. We like to take a scenic drive to Advocate Harbour where we purchase scallops. I sauté them while she supervises and then cut one into tiny pieces for her.” 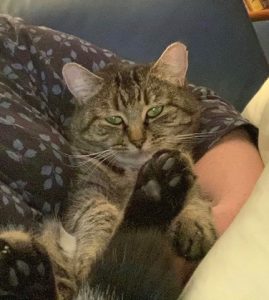 Lou spends several months each winter in Florida and Izzy is a great travelling companion during the 3-4 day drive. “She wears her safety harness and alternates between looking out the window and sleeping.”  This winter, Lou had a serious accident in Florida, dislocating her elbow and shattering her arm. “My health insurance flew Izzy and I home first-class, with a nurse to look after us. Izzy got lots of cuddles from the flight attendants and could definitely get used to a luxury lifestyle!” chuckled Lou.

“Izzy has been a godsend in my life,” exclaimed Lou. “Recovery from my operation was slow, but I never felt alone or discouraged as I had the best furry little nurse! It was comforting to have someone to snuggle with, talk to, and ‘help’ me with housework. Yes, I do talk to Izzy even though she is deaf. I tell her she is a very good kitty and that I love her. I think she understands.”

Do Lou and Izzy have any plans for Halloween? “I live at the end of a cul-de-sac so I don’t get many Trick or Treaters,” related Lou. “Izzy is such a chill little girl I know she would let me dress her up. Maybe I’ll make her a witch’s hat this year; she has certainly cast a spell on me!”

Lou told me “As we approach the first anniversary of her ‘Gotcha Day’, I am so thankful for Izzy. She is definitely the sweetest ‘treat’ anyone could ever ask for.” And Lou’s advice for people about adopting a deaf cat? “Like the Nike slogan says, just do it! I had Izzy for 2 or 3 months before I realized that she was deaf. Cats are very resilient and adapt well to different situations. They will have you trained in their needs in no time!”