For 12 years, a beautiful German Shepherd named Bodj stole hearts everywhere. She was a social butterfly and always on duty to care for her family. When Bodj’s owner was diagnosed with ALS, she went above and beyond to comfort him. Inspired by her love and loyalty, Bodj’s family started a scholarship in her memory.

This exciting opportunity is open to students entering their second year of a post-secondary education program centered around animal welfare and accredited by the Canadian Veterinary Medical Association. One dedicated student will be selected annually to receive $500 towards their education.

To be considered for the Bodj von Grunfeld® Scholarship, please submit an application through the link below. The deadline to apply is June 30th 2022.

The following criteria must be met: 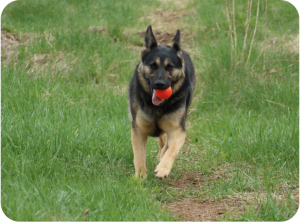 In the grand scheme of things of this world, with a pandemic, conspiracy theories, climate change, and unrest, the fate of a German shepherd seems to be a rather frivolous topic. How can a mere dog matter?

Yet, to us, our German shepherd, our beloved Bodj, was an integral part of our lives. For twelve years she shared with us and in our routines with enthusiasm, joy, and love. We watched her grow and develop from an uncertain puppy to a wise and knowledgeable adult. She learned quickly and her purpose in life seemed to be accepted as part of the family, to be appraised of every situation, and to do the “right thing”. How could we exist without her? Indeed, how had we managed thus far?

Bodj rejoiced in living, in being with other dogs, and in meeting new people. It was not unusual to be stopped along the street by complete strangers who were taken with her obvious enjoyment of life. She loved these moments. She knew that she impressed! Most German shepherds tend to be a bit aloof before first introductions. Not our Bodj! Each new person, each new dog, was another exciting experience, a time to savour. For people familiar with dogs, this was not a problem. For others, particularly non-animal people, the prospect of a welcoming German shepherd was not perceived as such! So we learned to “sit and watch” as strangers went by. If she met such people regularly, they relaxed and learned to interact with her. In the neighbourhood, everyone knew Bodj … she was the local Social Butterfly! (An unusual label for a breed not known for this attribute.)

Intelligence and assessments of situations were Bodj assets. Her background as a product of two working shepherds, was apparent immediately, particularly with my husband. He has ALS and requires assistance with a variety of tasks. Bodj was acutely aware of his disabilities and was quick to alert caregivers, including me, to potential problems. She had a sixth sense as to when breathing episodes were about to happen and would nudge him urgently. Even when apparently asleep, she would immediately go into action if she felt it was necessary. All her signals to humans were made in a kindly, yet insistent manner. She was on duty!

Bodj alerted us to any potential newcomers and quickly took her cue from us as to the suitability and acceptance of these people. She readily remembered each and every one. To a very few, she was obvious in her preference for them. These favoured few were “talked to” by expressive whines and vigorous tail wags. It was obvious that THEY came to see HER!

Bodj crept into our hearts and souls in a way no other dog had done. As the years progressed we realized how important and necessary she was to us. A friend once told me, “dogs make people better people.”Bodj was proof of this … not only with us but with acquaintances and friends. We watched with concern, as she aged and became infirm (Myelopaphy). Still, her zest and enjoyment for life continued even as her world shrunk to just around our property. If something was happening, she had to be there to supervise.

Inevitably, we reached the point of saying good-bye … a wrench, a heartache, an experience deeper than any we had previously felt (and we have had many fine dogs in our lives). We could not let her life go unacknowledged. Her loyalty, her love, her complete commitment to us were indeed stellar. It needed to be recognized.

As a result, the Bursary Program came into being. My husband wanted to do something that would honour Bodj yet be of practical use. What better than to help those who choose to make animal care their life work? What better vehicle to help reach this goal than the SPCA who so tirelessly work with unwanted and abused animals? Bodj would approve.

So in the grand scheme of things, we can take heart that even in hopeless times, the contribution of something as seemingly insignificant as a dog’s life , can be a powerful and meaningful statement. Animals can impact us to truly make us more compassionate people. Thank you Bodj for being an essential part of our lives.