Everyone knows that fostering and adopting is truly lifesaving for animals. But we often don’t stop to think about how it can be life-changing for people.

Erica began fostering back in 2019 with the Toronto Cat Rescue. “I originally wanted to have a cat of my own, but my mates suggested fostering since it would fit my lifestyle better,” Erica explained. “I work within the entertainment industry and that comes with a very transient lifestyle. But this also allows me to give these animals a second chance. I figured if humans could have second chances… why can’t animals? It only seems fair.” 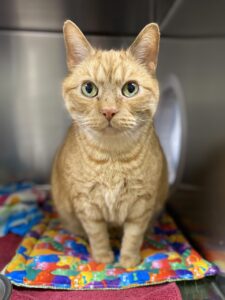 After fostering four kitties in Toronto, Erica moved to Halifax and fostered another four kitties through the Nova Scotia SPCA.

One of which was an orange kitty named Mokie. Closely resembling Garfield, Mokie was all fluff and love. But Erica was surprised to learn she had more in common with Mokie than she realized.

“Mokie came to me with pneumonia,” Erica recalled. “He was difficult to give pills to, but he taught me to have more patience and to put care first. It was very scary and sad. He was getting sick and ridding his body of the stuff in his lungs.”

At the same time, Erica was fighting her own health battle. 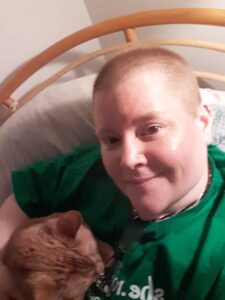 “I had triple positive breast cancer,” shared Erica. “Mokie, absolutely, was my helper. My meds after chemo were horrendous and caused lots of pain. Mokie would always stay with me and cuddle and be a companion when I was sick. So, basically, I took care of him… and he did the same for me.”

“Mokie also made sure I went to bed at a decent time,” Erica smiled. “And reminded me that I needed to shut the closets, or he would adventure on his own game of hide-and-seek. Mokie taught me that even if someone is sick, never give up on them, just be there for them.” 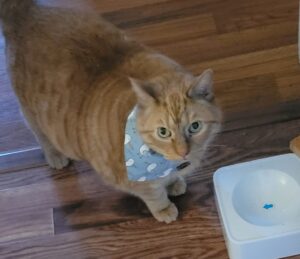 Erica’s battle with breast cancer included major surgeries and treatment. Instead of calling it cancer, Erica named it ‘Fred.’

“I’m lucky because ‘Fred’ was given the full boot via lumpectomy,” Erica explained. “Although I’m almost a full year NED (no evidence of disease), I have been doing treatments solid for the year. Now I’m two IVs away from completing the 4th major part of my treatment. Long story short, cancer is scary for so many people. It makes you realize who is standing in your court when it’s needed the most.”

One of Mokie’s specialties was making Erica laugh every day.

“I came home one day and saw he was on my bed,” Erica reminisced. “Suddenly I hear a thump and looked over to see him quickly climbing back up on the bed looking around like ‘okay no one saw me’ and went back to sleep. The next day I noticed he was sleeping in the same spot but with his arms stretched out to the wall… as if to prevent him from falling again haha.”

“Having Mokie was the best thing for me during a time I needed that little extra companionship,” Erica continued. “Animals understand us in a way humans can never. We don’t need to have words or say things… they sense it and they are so compassionate and they pick you. They choose you out of everyone. It truly is a fascinating thing.” 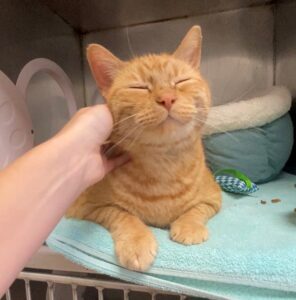 “Kindness has a ripple effect,” explained Erica. “Whether it is the simple act of holding a door, using manners, asking someone how they are doing… or in my case, helping an animal have a second chance at life and very possibly changing another human’s life in the process.”

And that is exactly what happened. When Mokie returned to the shelter, he came face-to-face with Carol.

“I met him and saw how calm and accepting of me he seemed to be,” Carol recalled. “I knew I wanted to take him home and introduce him to my other senior cat, Licorice. Although Licorice didn’t exactly play with him (that would be too obvious) she did start to copy him, and you could tell that even though she didn’t want to admit it that they were now friends.” 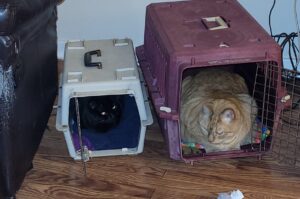 Sadly, Licorice passed shortly after. “But I know Mokie helped both Licorice and me get through a hard time,” Carol shared. “I love him so much for being there for Licorice, so she had the companionship of another great cat as she was used to for those last months.”

“Mokie is proof that one simple change or helper can make a huge difference,” continued Carol. “And how important it is to be around caring and loving energy. Now I get all the love and cuddles and get to enjoy Mokie’s antics and personality. I’m extremely grateful to have found Mokie and have him with me.”