Vince Angst grew up in the neighbourhood of the SPCA in Abercrombie. He would go in and ask how he could help. “It seemed to me that Dee Brown was running it all. And I wanted to help.” Vince loved animals and he started thinking about ways he could raise money for the shelter, telling Dee Brown he could hold a bottle drive.

“The thing is, you get these ideas as a kid, lots of them,” admits Vince. “And then your interests change. You move on to something else.”

That something else was building a career, home, and life with his wife Michelle at the base of Mt. Thom. Calling himself a ‘country boy,’ Vince always had dogs and cats in his life, acknowledging a soft spot for those who need to be rescued.

Having worked in auto sales for decades, Vince is well known in Pictou County. In fact, it was from the car dealership community, that Vince got the idea to host a golf tournament in support of the Pictou SPCA. 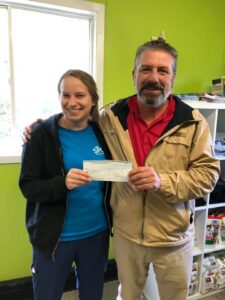 “A while ago the local car dealerships would get together to host a baseball tournament. And a few years back I thought, could I do that? What if I put on a golf tournament but for the local animals at the SPCA?” says Vince.

Vince set out to have a simple tournament. He went around town asking for auction items or for a business to sponsor a hole. The first year, one thousand dollars was raised for the Pictou shelter, with Vince crediting the small and local businesses in Pictou County that stepped up and continue too.

In 2022, Vince celebrated the tenth anniversary of the now named Kathy Skoke-Fortin Memorial Golf Tournament, raising 18 times more than the total in the first year. 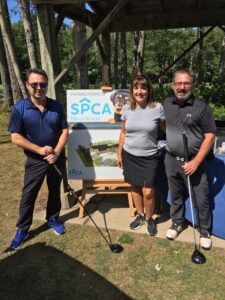 “The tournament is bigger than I ever dreamed. I could not do it without the support of my wife and father who support me every year,” says Vince. “And of course, community! But it is 100% for the cause. Everyone wants to help the animals, but also the staff at the shelter.” Vince says the support from the community is unbelievable.

One of those from the community who was a big support was Vince and Michelle’s best friend Kathy. “She was an animal lover known to take in the odd stray cat. She was a very kind and beautiful person.” A few years into hosting the golf tournament, Kathy was diagnosed with leukemia and passed away. To honour her, Vince re-named the tournament the Kathy Skoke-Fortin Memorial Golf Tournament. “This way,” he says, ‘she, an animal lover, won’t be forgotten.” 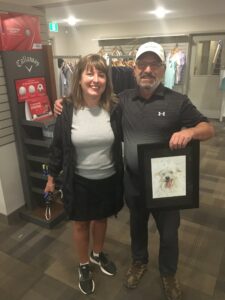 Vince’s legacy will not soon be forgotten either, as he played a pivotal role in helping the community get a new shelter.

It was about ten weeks before the 2020 Kathy Skoke-Fortin Memorial Golf Tournament, and Vince had a tough decision to make; with the world still living in a pandemic, could, should, he hold the tournament?

“There are a few months of planning that goes into holding the event, and I made the hard decision to cancel,” says Vince. While sad to miss a year, Vince was at work that morning and a couple came on the lot looking for a truck. So he went out and greeted them.

“I didn’t know the MacKay’s. But when they came onto the lot, we got to talking, and I told them I was a little sad because I had to cancel the golf tournament.” Turns out Vince was talking to two people who also supported the Pictou shelter and thought a new one was needed, Sharon and Elmer MacKay. “Sharon asked me who at the Nova Scotia SPCA I was working with, and I went into the office and grabbed Christa Jensen’s card and gave it to two great people.”

That day on the Angst Auto Sales lot, Vince helped lay the groundwork for a new shelter that will serve animals and families in Northern Nova Scotia. The North Nova SPCA will consist of a hospital for the community, a new shelter for animals, and a thrift store where profits are re-invested to support animal care.

That’s a little bit more than the bottle drive once promised to Dee Brown.

Sarah is the Director of Marketing and Communications with the Nova Scotia SPCA. At home, she parents rescue dog Mz. Roxy Roller and son Lochlan. Telling the stories of adopters, donors, and volunteers is what makes her tail wag. Connect with Sarah at slyon@spcans.ca or 902-229-8620 today.