By now, everyone should know the dangers of leaving their dog in a hot car.  But there are other dangers posed by summer heat, right in our own back yards. In June alone, SPCA Enforcement Officers responded to 31 calls about dogs in distress in people’s back yards!

Jo-Anne Landsburg, the Nova Scotia SPCA’s Chief Provincial Inspector, shared an overview of the 31 calls received from concerned citizens. All are alarming; one case broke my heart.

Jo-Anne’s depth of devotion to protecting animals was evident when she told me about one of the troubling hot-weather cases she and her staff of Enforcement Officers investigated. The case broke my heart; I’m sure it will break yours too.

Jo-Anne related “We were called about a dog that was left on a backyard deck in hot weather.

When we showed up, there was an English bulldog on the deck in full sun with no shade and no water. The owner was not home, nor could we locate them. The temperature outside was a hot 28 degrees. Penelope (as she was later named) was panting heavily and was lethargic.

Because we could not locate the owner and could not leave Penelope there in distress, she was seized and taken to the Dartmouth Shelter for medical treatment. During the trip, we turned on the air conditioning and gave her a cool drink. We were very careful not to cool her down too quickly. Penelope was then later diagnosed with Entropion in both her eyes – a condition in which the eyelid rolls inward, causing eyelashes and surrounding hair to rub against a dog’s sensitive cornea. Entropion results in eye irritation and pain, and if not remedied quickly, can lead to corneal ulceration. 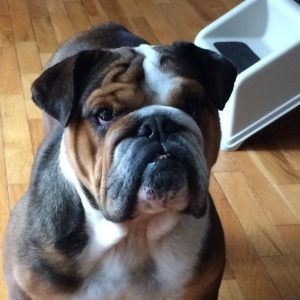 We waited for the owner to contact us, but they never did. Sadly, no one came for Penelope or even cared to see how she was. After the appeal period had lapsed, Penelope became property of the SPCA. This meant that we could now get her the surgery on her eyes that she desperately needed.

We returned several times and left several notes on the door. It was later discovered that whoever lived there moved away not long after and we were never able to trace the owner. Thankfully, due to a concerned citizen’s call to the SPCA, Penelope was now in good hands. She was sent to the Veterinary College in PEI to have surgery on her eyes. Everything went well and she was later adopted by a loving family.”

There were so many better alternatives for Penelope’s family; she suffered needlessly. If a concerned citizen had not contacted the SPCA about Penelope, she likely would have perished. Fortunately, her story had a happy ending, but not all dogs are so lucky.

Heatstroke can cause brain damage, organ failure and death. Elderly, very young and overweight dogs, and those with health concerns including heart or respiratory disease are particularly at risk. Some breeds of dogs – bulldogs like Penelope, pugs, shih tzus and dogs with short muzzles may also quickly succumb to heatstroke. These dogs should not be left outside in hot weather under ANY circumstances.

Jo-Anne said there are simple solutions to preventing heatstroke. “We recommend that:

Please don’t let this happen to your dog. Learn more about heatstroke below. And if you see a dog in distress, call the Nova Scotia SPCA immediately toll-free at 1-888-703-7722.

Please join with me in thanking Jo-Anne and her team of dedicated investigators for their outstanding lifesaving and advocacy work. These extraordinary champions truly play a critical role in animal welfare in our province.

If you see any of these signs, move the dog to a cool place, let them drink cool (NOT cold) water and call a vet immediately.