This is Boy the kitty. Yep… you read that right. Boy. You may be thinking, “what a strange name for a kitten.” And you’re 100% correct. But his name has a very unique story behind it. 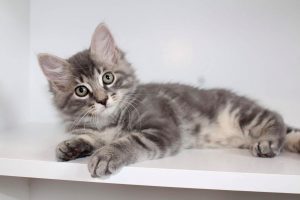 When I first met Boy, I was bringing his mama and his baby siblings home to foster. His mum, Farrah, was a young stray struggling to survive. She was rescued and brought to safety at the SPCA. Farrah settled in right away and actually gave birth in the lunchroom.

I had never fostered a mum and newborns before but I was up for the challenge. The shelter staff supplied me with everything I would need to give them a comfortable, cozy stay. Farrah, her babies, and I all headed for home. 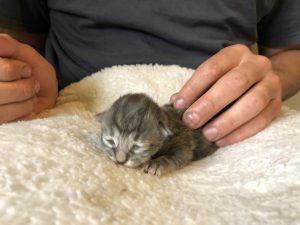 The baby kitties were only a day old. Their eyes were closed and their ears folded down. The kittens were so tiny they could fit in the palm of your hand!

Looking back, I remember thinking just how beautiful – but vulnerable – they were. I also knew I was already emotionally involved. To protect our hearts, my husband and I decided to call them something simple in the hopes we wouldn’t get too attached. 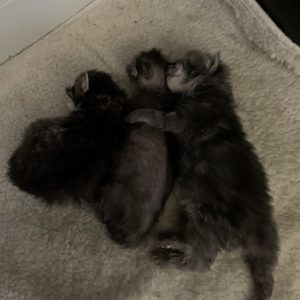 The grey kitten was male so we named him Boy. One of the tabby cats was determined to be female so she became known as Girl. And the third kitty was only sprouting peach fuzz fur so she was called Hairless. 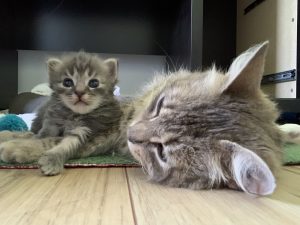 Farrah was a great mama but needed a little extra support so we helped to bottle feed the babies. In return, Farrah would cuddle up on our laps to show her appreciation. We watched as the babies began to open their eyes. We cheered them on as they wobbled around learning to walk. And we beamed when they discovered the litterbox and started to eat wet food. 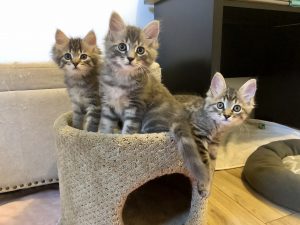 Even though we tried our hardest not to get attached, as expected, we fell head over heels for Farrah and the kittens.

So, when they were ready for adoption, we knew it would be emotionally difficult to say goodbye. 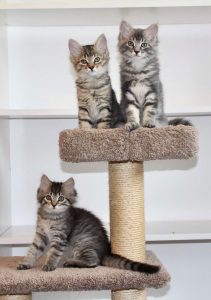 Our hearts were happy that we helped set them up for success but we also knew we would miss them deeply. We thanked Farrah, Boy, Girl and Hairless for trusting us to help them. We said our goodbyes and our foster pets went in for their spay/neuter surgeries.

But then… something happened.

When Boy was getting his veterinary check, like all SPCA pets do prior to adoption, his blood results came back inconclusive. To ensure he was okay, he would need to be fostered alone so they could run additional tests.

One by one, Farrah, Girl and Hairless (who had grown the most beautiful fur coat by this point) all found loving, forever families. While they were off starting their new chapter, we stayed home with Boy — worried but hopeful. 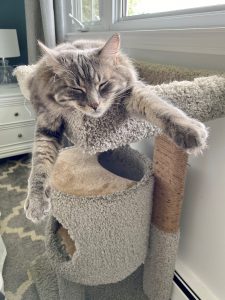 During that extra time, Boy enjoyed having all of our attention. He rolled around with excitement when we walked in the room. He made us laugh constantly by getting spooked at random household objects. And he melted our hearts when he curled up in our laps to knead adorable air biscuits.

After two weeks, the results came back. Boy was perfectly healthy! But could we say goodbye… for a second time?

We sat Boy down and asked him if he planned this all along. Did he play a trick to get us alone? Did he plan this so he could use his cute magic to go from foster to forever?

His response? An adorable head butt and brush. So, we think it is safe to say he is a mastermind.

Boy always knew he was meant to stay with us, and now we knew it too. It was official. We tried changing his name to Clyde but Boy stuck. He was our boy.

Boy may have tricked us into adopting him but having him in our lives has been the best treat of all.