On June 25, 2020 SPCA Enforcement Officers responded to a dog running loose. He was starving; nothing more than skin and bones.  His ribs were poking out and he was covered in sores.  A male Boxer typically weighs 70 pounds, but the dog barely weighed 30 pounds.  When dogs are this emaciated, their organs begin to shut down. 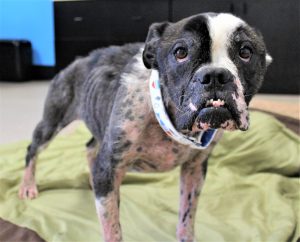 As a direct result of the dog’s poor physical condition and investigation, he was seized and rushed in for emergency veterinary care. The caregivers were given a seizure notice and appeal documents. However, no appeal was filed with the Animal Welfare Appeal Board.

The SPCA medical team wasn’t sure he would survive the weekend. 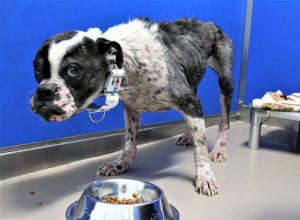 Since he was sadly half the size of a healthy dog, had hairy feet and a long journey to recovery ahead of him, shelter staff took inspiration from Lord of the Rings and named him Bilbo Waggins.

As a proud no-kill organization, the Nova Scotia SPCA was determined to do everything possible to help Bilbo.  But they couldn’t do it alone.  They put out a call for help and the response was overwhelming.  Compassionate animal-lovers from across Canada generously donated to help cover the cost of Bilbo’s intensive medical care on his journey to recovery.  Thanks to your donations, Bilbo was given a second chance for a safe, happy and healthy life.  He definitely felt your love and support! 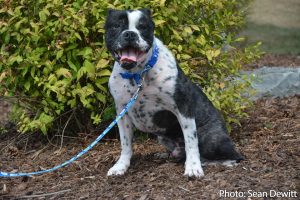 Bilbo was under round-the-clock care and monitoring and started a new feeding schedule of small frequent meals.  He slowly gained weight and strength.  By the end of July, he was feeling much better.  In early August, Bilbo was medically cleared and posted for adoption on the SPCA website.  Applications came flooding in!  The SPCA began booking meet-and-greets to find the perfect match for Bilbo.  After receiving interest from some amazing homes, Bilbo was adopted on August 17th by his fur-ever family! 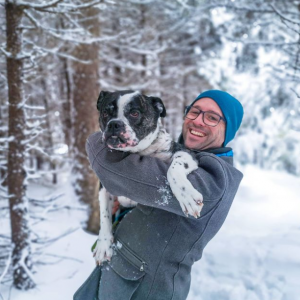 I caught up with Bilbo’s fur-dad Andrew. “Bilbo looks identical to my older dog Rika’ shares Andrew.  “‘When his story first came out, a number of my friends saw his photo and sent it to me wondering if he was related to Rika.  He was from the same area and had a similar sad story.” Andrew continues “I was drawn to him immediately after seeing the heartbreaking picture of him on the day he was rescued.  That picture grabbed my heart and squeezed.  His eyes were so sad.  He was a skeleton with some skin.  He looked as if he had given up on life.  I knew he was destined to be in my life.” 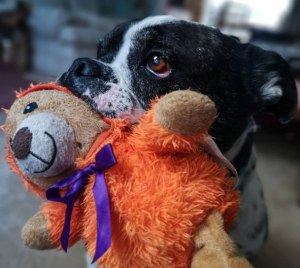 Bilbo was a little unsure about his new surroundings at first.  “He was understandably food-obsessed for the first 4 months, but he began to trust that he would be fed several times a day,” relates Andrew.  “We knew he was going to be fine after he ate his first dinner.  He rolled on his back and made all kinds of happy sounds. Then we gave him his first toy and he spent 20 minutes running back and forth in the house parading it around.  He still does that every day!  He just loves his toys.”

Bilbo had every reason to be mistrustful of people.  But Andrew states that he’s the exact opposite.  “He’s incredibly trusting and loves people.   Bilbo adores children and takes it upon himself to keep them safe, making sure that they don’t get too close to the shore or stairs.” 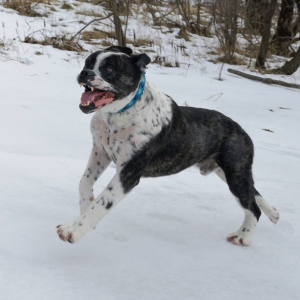 Andrew shares that Bilbo is amazingly tuned-in to people and their emotions.  “He looks at your eyes and gets a read on how you’re feeling.  If you crack a smile, he smiles back and does a little dance.”  But Bilbo’s heart is also attuned to sadness.  “One day I was at a friend’s house,” shares Andrew.  “She was having a terrible time dealing with a divorce.   She broke down, cried and sat on the kitchen floor.  Bilbo went and grabbed his toy, brought it over to her and placed it in her lap almost to say, ‘I see you’re sad.  Here is my toy.  You can have it because it makes me happy and it should make you happy too.’”

Bilbo is definitely living his best life, filled with adventures and beach days.  Among his favorite things to do – walks, walks and more walks’ chuckles Andrew.  “He also loves taking every opportunity to find a good vantage point for a scenic view where he will sit for hours just taking it all in.   It’s remarkable to watch him appreciate the little moments. He reminds me that I should do the same thing.” 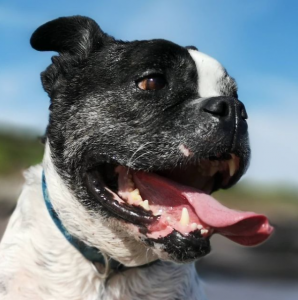 I asked Andrew what Bilbo has brought to his life.  “Like Rika, Bilbo keeps me balanced.  I used to work 15-hour days 6 days a week.  When they came into my life, that changed overnight.  Bilbo comes with me everywhere.  I never ask if it’s ok if I bring a dog over to a friend’s house.  He and I are a package deal.  If I go, he goes!” laughs Andrew.

In August last year, Andrew decided to create an Instagram account for Bilbo, so animal lovers could follow along with his latest adventures. Today, Bilbo has over 700 followers!  Andrew states “I think if Bilbo could talk, he would say “ADOPT, DON’T SHOP”.  That’s why it’s always the first Hashtag we put on his Instagram posts.   People sometimes want a purebred dog or a puppy.   That’s a shame since there are so many deserving mixed-breed dogs and older dogs who just need a chance…..all they want is for someone to love them.  Bilbo was a very sick older dog who will need medicine and a special diet for the rest of his life.  Dogs like him tend to get overlooked, but for me, he is absolutely perfect.”

August 17th is the one-year anniversary of Bilbo’s ‘Gotcha’ Day.’  I asked Andrew to reflect back on their first year together and the journey that Bilbo has taken.  “I’m so proud of Bilbo” relates Andrew.   “Every day, people say ‘That is one well behaved dog’ or ‘Your dog is super-cool.’ I love watching him enjoy himself. I’m just amazed that it’s been a year already! On his special day, I think we’ll go for a sail and I’ll share some imported Havarti cheese with him,” laughs Andrew.

Andrew’s final thoughts? “I run through that fateful day in my head. I can imagine the glimmer of hope he would have had in his heart and his feeling of liberation as he charged forward as fast as his weary feet could carry him.  And then, in that most perfect moment, the SPCA were driving by and saw him running across a field. I’m so glad they found him. I’m so grateful he came into my life.”

Thanks to you, Bilbo is living his happily-ever after. Please help other animals like Bilbo by donating today.

The SPCA Enforcement team conducted a thorough and careful investigation. As a result, charges were laid under the Animal Protection Act of Nova Scotia against Bilbo’s previous owners. Further details cannot be released or discussed while the court process is proceeding.