He had no name, so the Cape Breton SPCA shelter staff named him Henry.  When he arrived on April 26, 2019 Henry was shivering and severely emaciated, weighing less than 3 pounds.  He suffered from diarrhea and had to be placed on a careful re-feeding schedule.  The fur on his face and entire body was extremely matted and full of debris.  Since the matts went down to his skin, Henry had to be sedated while he was shaved.  He needed to be neutered but had to gain weight prior to undergoing surgery.  So the next step in Henry’s journey was to stay with a foster family for several weeks where he could gain needed weight and receive lots of care, love and socialization. 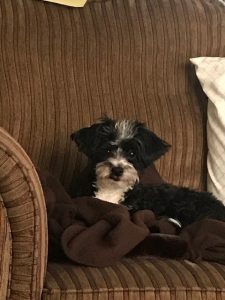 Enter Derrick and Rosemary MacNamara.  The couple’s beloved Yorkie Pebbles had passed away 6 months ago.  They decided it was time to open their hearts to another deserving dog.  Derrick explained “Our home was so quiet after Pebble’s passing. We missed the joy of having a pet, so headed to the SPCA to find a new family member.” When they met Henry, it was game over. “He had such a sweet face and was so frail and scared that he melted our hearts,” related Derrick.

“We understood that we couldn’t officially adopt Henry until his weight was restored and he was neutered, so we signed on to be his foster parents,” said Derrick. “We were over the moon to think that this little dog was coming home with us.  Henry snuggled into my wife’s arms and settled in for.  That continued to be his favorite place to be!”

Henry gained weight quickly in his nurturing environment.  Derrick stated, “I took him in to the SPCA veterinary hospital every week for a weigh-in and within a few weeks, Henry was ready for his surgery.”  Once he was medically cleared, the couple officially adopted Henry on June 6, 2019. “We knew from the get-go that this little fellow was meant to be ours,” Rosemary shared. 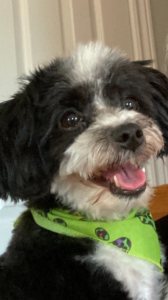 Since being adopted, the transformation in Henry has been amazing.  Rosemary explained “For the first 2 to 3 months, Henry was very timid and constantly wanted to be held close.  People thought we must have adopted a cat since he never barked.  But Henry eventually found his voice and knows how to use it!” she chuckled.  “Everyone who meets Henry falls in love with his personality. He is very affectionate and especially loves to cuddle with our four grandchildren.”

“Henry has filled our home with joy and laughter once again,” shared Derrick.  “He loves to run as fast as he can while you pretend to chase him.  His ears are always tuned-in when you pick up your car keys – he is coming along for a ride like it or not!  And don’t leave your pizza unattended – it’s Henry’s favorite.”  And Henry’s favorite pastime?  “Sleeping, curled up on the chair that no one else is allowed to sit on now!” laughs Derrick. 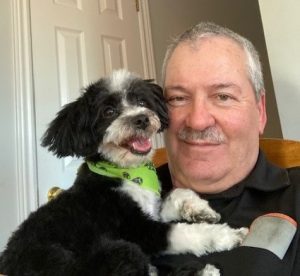 The couple’s final thoughts?  “We recently celebrated the second anniversary of Henry’s ‘Gotcha’ Day,’ which would never have been possible without the SPCA.  They nursed him back to health, and gave him the love, care and attention he so desperately needed after he was abandoned. We are so happy that Henry is part of our family and so thankful for all the hard work that the SPCA does.’

Luckily, Henry’s story had a happy ending.  Not all abandoned animals are so fortunate. There is NEVER a good reason to abandon your pet. The Nova Scotia SPCA has an open admission policy. They never judge and understand that unexpected life situations happen. If you need to rehome your pet, please call to schedule a time to come in. This allows the shelter to prepare a cozy space for your pet to make the transition as smooth as possible. They understand how difficult emotionally it is to surrender a pet and thank all owners who are able to make the best decision for their pet. Please help us share this important message.