Ever since Ryan Maclean was a young boy, he always loved dogs. He enjoyed learning and teaching tricks and basic obedience. But it wasn’t until Ryan met a special dog named Zeus that he was inspired to begin a dog training business. 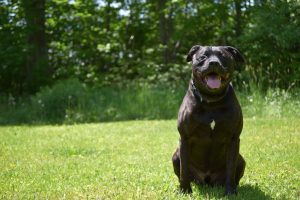 In 2014, Ryan and his wife first met Zeus at a shelter in Quebec. “He was born into a shelter and spent his first 8 months of life there,” recalled Ryan. “Although the Nova Scotia SPCA is no-kill, many other shelters place expiry dates on pets due to capacity issues. Quite simply, these dogs all have so much love to give and not much time to give it. Dogs that are not claimed or adopted by the expiry date get euthanized. Zeus came from a shelter like this.” 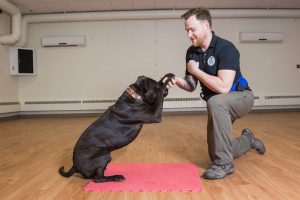 With zero socialization, Zeus had developed a lot of unwanted behaviors like nipping and jumping up – particularly towards men. “His name at the time was Zoomer,” shared Ryan. “He had a tendency to get the zoomies and just go on uncontrolled sprints for 10 minutes at a time. If you tried to get in his way to stop him… think of it as you are the bowling pin and he’s the ball.” Ryan enrolled Zeus in obedience classes to help work through these concerns.

The trainer, Megan, was extremely helpful and inspired Ryan to learn more. “I was invited back without Zeus just so I could see other behaviours and how to overcome them,” explained Ryan. “That transitioned into tagging along to private lessons that dealt with behaviour modification. Of course, I hit the books and absorbed all of the information that I could surrounding positive reinforcement dog training techniques and behaviour modification.” 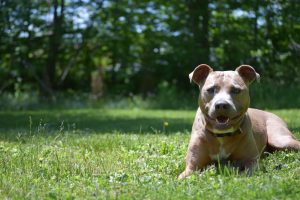 Zeus was making positive progress and the family was eager to help another pet in need. In 2015, after the Nova Scotia SPCA seized more than 20 dogs and pups, it seemed like fate. Ryan and his wife were one of the first families to apply and were invited to meet the puppies. “Nova was the only one who immediately came up to us without any apprehension and engaged,” smiled Ryan. “This led us to saying she was the one. But the decision was not just up to my wife and I… it was also up to Zeus.”

We arranged for a meet-and-greet for Zeus and Nova to see how they would interact. After a few sniffs they began playing right away! “Zeus even had a pee right after meeting her and Nova passed underneath him; we call that her christening into the family,” laughed Ryan.

After close to two years of shadowing Megan and studying dog training, Ryan started plans to open his own part-time business. On January 29th, 2017, he proudly opened MAX Potential Dog Training, lovingly inspired and named after his childhood dog. 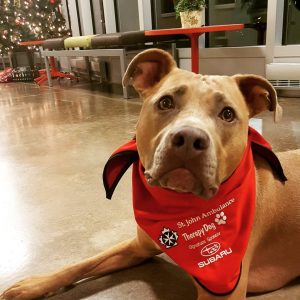 With MAX Potential Dog Training, Ryan began helping other dogs become the best version of themselves. On top of that, he continued to work with his own dogs to become certified Therapy Dogs. The test involves a number of simulations and tools that the dogs would not normally see to gauge their reaction. By establishing solid ‘Focus’ and ‘Heel’ commands, Zeus and Nova passed with flying colours and were both approved to work in long-term care facilities. 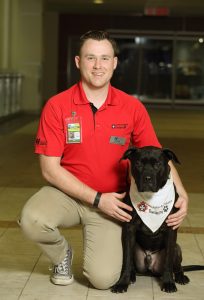 After a year, Ryan took Zeus back to get further certification and he became a special needs therapy dog. The same dog who used to be obsessed with zooming around was now helping seniors and children. “I ultimately worked towards attaining this because it puts a much-needed positive light on the breed,” Ryan shared. Zeus and Nova, both American Staffordshire Terrier mixes, are unfairly stereotyped against. “I believe the discrimination comes from a lack of understanding about these breeds and their history. Ignorance fosters fear and unfortunately many people I have met that dislike these breeds are often those that have either never met one of these dogs or have never had a negative interaction with them at all.”

When 2020 hit, everything changed. Ryan was forced to stop private in-home lessons and the facility he was using blocked all rentals. Determined to help dogs and their families, Ryan created online training videos. “When new dogs owners want training, it’s not like buying a toy or a bed – another box to tick on a list – it’s something that they have an immediate need for,” explained Ryan. “I recorded videos of myself doing the course curriculum. Once per week, we would meet online to cover the behaviours for that particular week. I would use my dogs for demos and of course answer any questions folks had.” 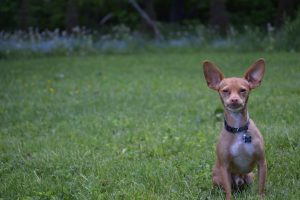 The online class is extremely helpful and gives families an opportunity for a journey with their dog. “Our client receives a weekly email letting them know when a new week is unlocked,” explained Ryan. “There is also a ‘Submit Your Progress’ portal where a person can record themselves working on a behaviour with their dog that comes straight to me to review and provide feedback. This shift to an online model enables pet owners that cannot attend a class to get the same curriculum, guidance and support.” 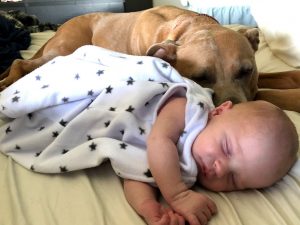 This year has been challenging but there have been some happy moments and silver linings. Ryan and his wife welcomed their new son, Simon, into their pack. Crash, their Rat Terrier mix rescue, fell in love with Simon. “Simon is definitely Crash’s favorite human in the house at this point,” laughed Ryan. “When they first met Crash sniffed him and backed off. Simon then let out a cry and Crash went to check him out again to console him. Their relationship has grown from there.”

Ryan hopes to inspire dog owners to invest in training and to consider adoption first. “Breeders breed dogs based on supply and demand and therefore can slow down if more folks consider adoption first,” he shared. “Shelters have populations of dogs that were bred yesterday but need a home more than ever… today.”

We have exciting news! Ryan and MAX Potential Dog Training are generously offering their online course at a huge discount for SPCA supporters. You can get the course, valued at $120, for 50% off… only $60 taxes in. Use the discount code SPCA50 today!