“Let’s just go see the shelter pets.” As an animal lover, you’ve probably either said or heard that before. How many pets did you fall in love with during your visit? Did “just going to look” become your famous last words?

Well, that is exactly what happened with Kelly.

“My mate at the time showed me Laddie’s picture and asked if I wanted to just go see him,” Kelly shared. “I was worried as to how my other nine-year-old rescue would react, so we took him with us.” 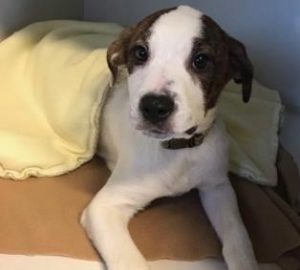 Laddie was one of six adorable adoptable pups who had been surrendered to the Yarmouth SPCA. By the time Kelly got to the SPCA later that day, Laddie was the lone pup left. All his fur brothers and sisters had found forever families except for him.

Kelly was smitten. It was more than love when she locked eyes with Laddie. She knew what she was feeling. It was the same feeling she had when she adopted Bruno the year before.

“Laddie and Bruno got along and I noticed that they shared the same colour brindle and both had spots,” Kelly explained. “I was a goner… so I let him rescue me!”

The crew hopped in the truck and headed home together. “Neither Laddie nor his adopted brother showed any fear or discomfort about coming with us,” Kelly remembered. “We were super lucky! Laddie was very playful and quite intrigued with the cats… much to one of the cats’ chagrin!”

Where Laddie was a young pup, he needed a lot of training and love. “Boy oh boy, it was a challenge,” recalled Kelly. “We didn’t think we would ever get him trained. We knew he was smart and I was determined.”

“Bruno seemed to almost father him a bit – correcting him and keeping him in line,” Kelly shared. “The sweetest thing that I saw Bruno do was let Laddie win when they would play. By this I mean that Bru would twist his body down to the ground so that Laddie could be on top and win!” 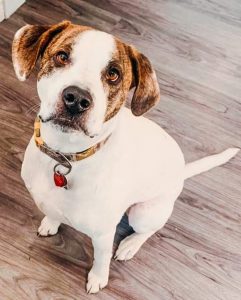 The patience, hard work, and extra energy all paid off. “He is now a very well behaved and energetic boy,” Kelly smiled. “Every day is amusing. He does what I call a ‘rabbit run’ where he zooms in huge circles at the speed of light! He only does it outside now which is nice (he ruined a couch that way lol!) He is sweet and goofy and cuddly. He also loves to tease his brother and furry friends with his toys and bones, trying to get them to chase him. Playful is an understatement when it comes to him!”

This month marks Laddie’s two-year Gotcha Day – a day to celebrate his adoptaversary. It has been two years of training for Laddie but he has been doing his own teaching, too.

“Laddie embraces the ‘play hard, relax hard’ motto and reminds me to do the same,” Kelly reflected. “He also approaches everything with a joyous exuberance that you can’t help but feel yourself as you watch him.”

Those “just going to look” famous last words ending up helping everyone. When Laddie was adopted, there was more shelter space to help the next pet in need. Bruno got a loving brother who helps to keep him young. And Laddie found a caring family who helped him reach his full potential.

But perhaps the most affected was Kelly herself.

“Rescues reward you by letting you look at life through their eyes,” she smiled. “You don’t rescue them, they rescue you.”