You may have heard the saying “It takes a village to raise a child.” I think it takes a community of caring people who turn their compassion into action to ultimately save an animal’s life and give them a chance for the happiness they deserve. Many of you will remember sweet Bear. His story is a perfect example of people turning compassion into action. 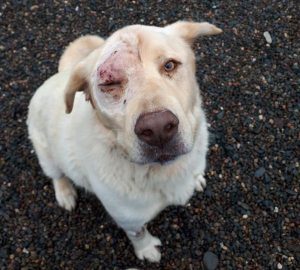 On April 26, 2019 the Nova Scotia SPCA received a complaint from a caring citizen that a dog was outside with porcupine quills in his face. Enforcement Officers responded and found a large dog is distress.  When the owner refused to seek treatment, the dog was seized and immediately brought to the SPCA shelter for urgent medical care. The shelter named him Bear. 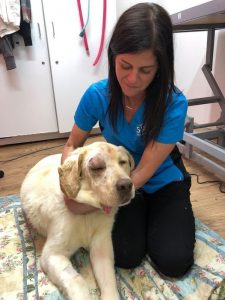 Bear had been neglected so long that the fishhook barbs in the quills deepened causing a severe infection. He was rushed to emergency surgery to remove the buried quills. Bear had been kept outdoors for most of his life. He had sores on his joints, a burning ear infection, overgrown nails and a dirty, matted coat. The quills had worked their way behind Bear’s eye and he was at risk of losing his sight. He received round-the-clock care, a variety of medications and endured 3 separate surgeries to remove buried quills as they emerged.

As a proud no-kill organization, the Nova Scotia SPCA was determined to do everything possible to help Bear. But they couldn’t do it alone. They put out a call for help and the response was overwhelming. Compassionate animal lovers from across Canada stepped up to the plate and generously donated to help cover the cost of Bear’s medical care on his journey to recovery. Thanks to your donations, Bear was given a second chance for a safe, happy and healthy life. He definitely felt your love and support! 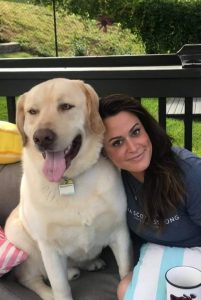 Eventually, Bear made a full recovery and on May 19th, he found his fur-ever family. Like many people, Holly and her 2 sons, Declan and Nolan, first learned about Bear on the SPCA’s Facebook page.  “He was looking up with his injured eye. He looked so sad and our hearts went out to him,” shares Holly. “We attended a meet-and-greet and it was game over as soon as we met him. We knew he needed to be part of our family.” Bear had to remain at the shelter for several days pending adoption approval and to complete a round of medication. Holly explains “After our initial meeting, Bear watched us leave through the shelter’s door. It was so hard to leave him but we promised him that we’d be back.” 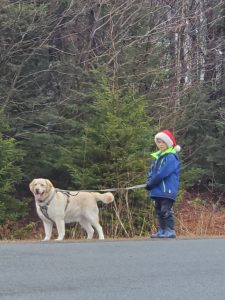 Holly says “The first thing Bear did when we got home was to jump up on my bed, so I’d say he settled in very quickly!” She continues “He was cuddly and loving from the get-go and he definitely soaks up all the hugs. It did take him a few months to begin to play, however, likely a reflection of his previous life.” 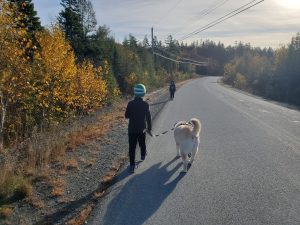 “After adopting Bear, we learned that he used to walk several miles to a family with children,” relates Holly. “He was loved there and was used to children because of this kind family. We have met them and it was wonderful. They were his refuge. He was loved by them regardless of the unfortunate situation where he lived. We are very grateful for their compassion and caring.” 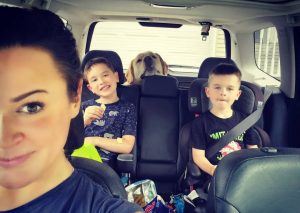 Holly exclaims “Bear is just so full of love. We can’t imagine life before him now.  He comes everywhere with us. He has filled our home and our hearts.”  And on the list of Bear’s favorite things? “He absolutely loves cuddling and enjoys just being near us, going for walks, being brushed, and his monthly grooming appointment! He also gets really excited when the boys and I put on music and dance. He has his own way of joining us and it is adorable,” chuckles Holly. 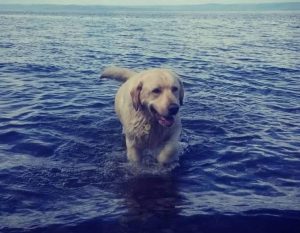 “The second anniversary of Bear’s “Gotcha Day” is May 19th and the date has special meaning for the family. “I cried like a baby the day we finally were able to bring him home and we’re very thankful for him every day,” shares Holly. In fact, Bear may soon get a canine brother. Holly explains “We think that Bear would love having another fur-baby in the house to play with, so we’re seriously considering adopting another deserving dog.” 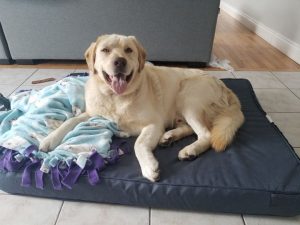 Holly shares “We are so grateful to the NS SPCA for saving Bear and bringing him into our life.  Since adopting him, additional quills started making their way out of his eye. The SPCA took such good care of him; everyone was wonderful. He’s had no problems since this last surgery – maybe a little Covid weight, but we’re all working on that!”, she laughs.

Holly continues “We are also grateful to all the people who donated to our sweet Bear’s recovery. There are so many wonderful people with huge hearts out there. So many people reached out and even sent care packages to Bear.  One sweet lady even made him a blanket and put a heart inside of it.”

Thanks to you, Bear found his fur-ever family and is living his happily-ever after. Please help other animals like Bear by donating today.

Charges were laid against Bear’s previous owner under the Animal Protection Act for permitting an animal to be in distress and failing to provide adequate medical attention. His previous owner was sentenced for cruelty and the court imposed a fine of $50 on his owner. The SPCA continues to push for a more humane Nova Scotia by advocating for the ethical treatment of all companion animals, and hope the courts do their part as well.

Each one of us can play an important role in advocating for animals. Animals can’t speak. We must be their voice. It will take time, but with your support, we will fight for justice for companion animals. To this end, I’m reminded of a quote by Margaret Mead……  “Never doubt that a thoughtful group of citizens can change the world; indeed, it’s the only thing that ever has.”