Dogs – check.  Cats – check.  Most people know that the Nova Scotia SPCA has lots of amazing cats and dogs looking for their forever homes.  But did you know that the SPCA often has adorable small animals that need loving families? From rabbits to rats, bearded dragons to mice and even roosters – there could be a cute little critter that’s just right for you!

These pint-sized pets, like their bigger shelter buddies, came to the SPCA through no fault of their own and are equally deserving of love and happiness. Last year, 161 small animals were adopted from the SPCA.

We’re thrilled to share updates on some of the SPCA’s awesome itty-bitty alumni. 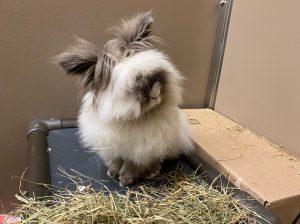 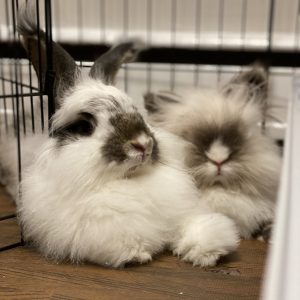 This sweet gentle soul was found stray.  At the shelter, Ava Bun-Bun was very social and energetic.  It didn’t take long for a loving family to find her.  With her unique cute-as-a-bug appearance, we think that Bun-Bun may give Grouchy Cat some competition!

Her dad Dan McCarthy gave us the scoop.  “As soon as I saw Ava BunBun’s photo, I knew my other rabbit Angus had to meet her.  I set up a ‘bunny date’ at the SPCA Animal Redemption Center. On the big day, Angus was a little nervous and was hesitant to leave his carrier. Ava BunBun scampered around a bit, had a few sniffs and approached the carrier. Then she stuck her head in the door and hopped right in! It was love at first sniff! Her and Angus have been inseparable since.  She has blossomed into an independent little lady who will only do things on her terms. Angus is a doting ‘husbun’ (both fixed of course).  She has her own Instagram account (@Ava.BunBun) and they have a shared Instagram account (@the_dustbunnies). They’re gaining followers and I love that we can utilize their adorableness to raise awareness about rescue, adoption and getting a second chance.” 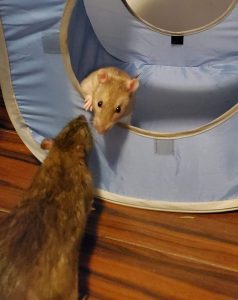 These adorable boys were surrendered because their owner couldn’t care properly for them any longer.  You could tell immediately that they were a bonded pair, so it was rat-tastic when the boys were adopted together!  And besides, two rats are twice as nice.

Their proud mom Kati Scopie told us that “Thanks to the amazing staff at the Dartmouth SPCA, Steak and Taters were already very socialized and loved human contact.  Taters is obsessed with any attention he can get and if he thinks you have a treat, you will never get him off you!  Steak is my own personal groomer and loves to eat snacks in his hammock.  They both love coming out to play, eating snacks (peas and pasta are favorites) and using me as a human tree.  Taters loves a full body scratch and Steak prefers gentle pats on his cheeks.  I am so happy to give them a forever home.  Their story is going to be included in every Christmas card I send this year!” 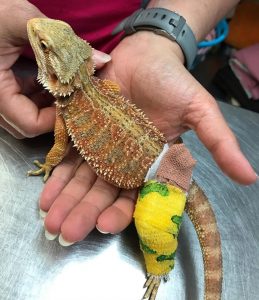 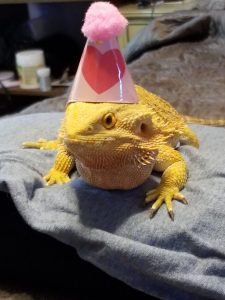 This beautiful bearded dragon was seized along with several other pets. Pancake’s owner was charged under the Criminal Code of Canada.  Pancake was very weak when she arrived at the SPCA and was diagnosed with a fractured femur.  Two months later Pancake was adopted by an amazing family.

Her doting mom Abbie Offman shared this update.  “Pancake is a funny little character who loves to explore.  When I let her out of her enclosure for exercise, she runs all over the place, finally finding some nook or cranny to hide in. I’ve had her outside, on a little leash, to explore the backyard to get some sun. She’s met the neighbors and is a big hit.  She is a light sleeper and loves to give me the stink eye if I try to take a picture of her while she is sleeping! I am completely obsessed with taking photos of her, she is so photogenic.  August 27th is her 1 year ‘gotcha’ day and I can’t believe it’s been that long.  We’ve dealt with a number of health problems along the way but despite all of the obstacles, she is our little girl forever and I don’t mind her extra care one bit.” 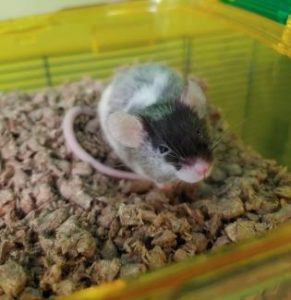 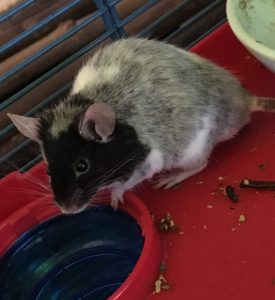 This wee fellow was surrendered and with his attractive coloring, cuddly nature and charming personality, Hercules was adopted quickly.  Now, he’s the chief mouse of the house!

His mom Nanci Bond shared this update.  “Hercules has done exceptionally well since we brought him home. He has settled into his new house and he’s very interactive and increasingly social. He will perch on my daughter’s hand and likes to ‘boop’ it with his nose – hoping for a blueberry for a treat. He has been a great addition to our house.  It’s always fun to watch how busy he is – especially after cleaning his cage when he likes to redecorate to his own style!  Many thanks to the SPCA for taking in these little critters; we’re very happy to have him with us.” 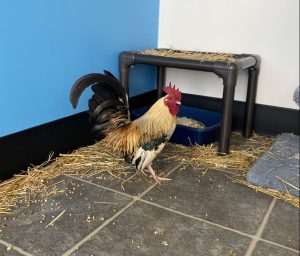 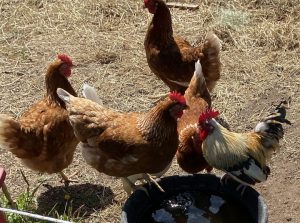 This handsome young man was found wandering by himself and came to the SPCA through Animal Control.  With his good looks and spunky personality, Edward was adopted quickly.  We hear that he has lots of new female friends in his new home and is soaking up all the attention!

His mom Fran Morrison gave us the latest.  “I adopted Edward in early July.  He is a gorgeous little bird.  From day one he took over the barnyard.  When I open their door and let the birds out in the morning, he is the last one to go… he lets all the ladies out first!  And if there is a hen in the nesting box, Edward keeps the others in the barnyard until she goes out.  Then they venture around the property hunting for bugs. They made a mess of my garden, but I don’t care – animals come first in my world!  Edward crows all day long which is hilarious because he has the cutest squeaky little crow. You’ll see that he is half the size of the hens, but clearly, he’s the boss!  That’s why I call him ‘King’ Edward.”

Thinking about adopting a little critter??  There is a lot to know before deciding to adopt a small animal.

Many little critters find themselves in a shelter because their previous family no longer had time for them or their children lost interest.  Small animals should never be thought of as ‘starter pets’, easy to care for or inexpensive.

Every animal has their own unique requirements.  You need to learn what to feed them, how much exercise and attention they need, what type of enclosure they need, how to live with and care for them.  You need to be sure that the animal fits well with your lifestyle and budget and that you can make the long-term commitment that comes with adopting a companion animal – even a very small one! The SPCA can provide you with the information you need to ensure that your pint-sized pet will have a safe, happy and healthy life.

Check out the SPCA adoptions website regularly for little critters that need loving homes.  Your new companion may be just a click away!