Eggnog, Gingerbread and Peppermint Patty had a heartbreaking start in life.  On a cold December evening last year, they were found wandering in the middle of the road.  Sadly, their mom had been killed by a car.  A kind man rounded them up and immediately brought the kittens to safety and warmth at the Kings SPCA.  We don’t know his name but want to thank him for saving these three precious souls.  If not for his kindness, the kittens would likely have died from the cold or been run over. 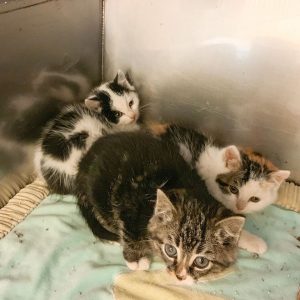 At only 6 weeks old, the kittens were too young to be put up for adoption.  Being semi-feral, they also needed to be socialized to build their confidence and adaptability and ease their transition to a new forever home.  So, after receiving much needed medical care at the shelter, the next step was to find the kittens a loving foster home. 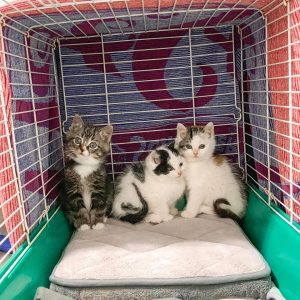 In stepped Allyson McGuigan, the purr-fect foster fur-mama.  Allyson is a Registered Veterinary Technician and had recently started working at the Kings SPCA.  Allyson texted her partner Jason Comer asking if he was ok with her bringing home 3 very under-socialized kittens to foster who were having a bit of diarrhea.  The couple had just adopted their 4th fur-baby two weeks prior.  Allyson relates “Bless his heart, he said yes.” 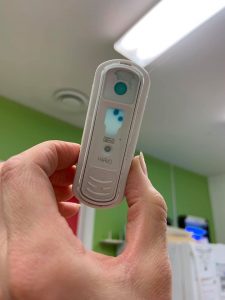 Before taking them home and because they had diarrhea, Allyson tested the kittens’ feces for a contagious often fatal virus called panleukopenia (feline distemper).  The virus is contagious for unvaccinated cats and kittens that are too young to get their vaccine. These tests are routinely done at the SPCA before any animal leaves for their foster home.  All 3 tests were negative. 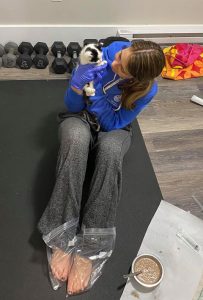 Allyson says “About 48 hours after I got the kittens home, one wasn’t doing great so I tested them again for panleukopenia and sure enough, all 3 were positive.” She explains “There aren’t any medications capable of killing the virus, so all you can do is provide supportive care until their immune system can fight it off.  If they survive 5 days, their odds of recovering are greatly improved.  If they get through 14 days, they’re in the clear.” 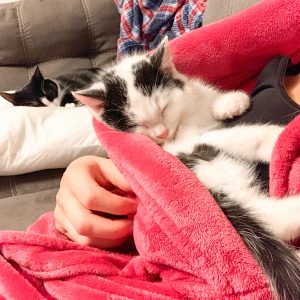 Supportive round-the-clock care consisted of providing nutrients and correcting dehydration.  Allyson notes that the SPCA never expects foster parents to take home or care for sick animals unless they have been trained.  “Force-feeding multiple times a day and injecting fluids under their skin isn’t a great way to gain the trust of a kitten!” she adds.  After 14 days in quarantine, the kittens had beaten the odds – they had gained weight and were perfectly healthy.  Yay! 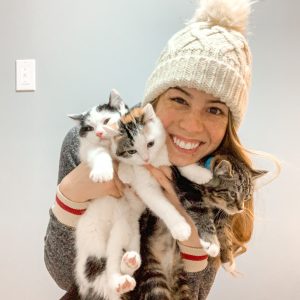 Now it was time to begin socialization as the kittens were still very afraid of humans.  “Jason, I and our cat clan did our best to give them gentle love and prove to them that living with humans can actually be fun,” says Allyson.  “To earn their trust, we petted them while they were eating yummy food and snuggled them lots.  One of my favorite tricks was to put a hoodie on backwards and carry a kitten around in the hood.  Once the kittens were in the clear, we slowly introduced them to our cats, with direct supervision.  They all got along great after the usual initial hisses and sniffs.”

Allyson’s final thoughts?  “If you’ve ever considered fostering, DO IT!  It is one of the most rewarding and fulfilling things I’ve ever done.  Yes, saying goodbye sucks, but I recently read this and it is so true………….. ‘On the day you say goodbye to your foster kittens, they say hello to the beginning of the rest of their lives.  It’s important to enter this day with a feeling of achievement and celebration – because of you, this tiny life can now grow.  Because of you, some lucky human will have a new best friend.'”

Thanks to kindness, Eggnog, Gingerbread and Peppermint Patty beat the odds twice and we are thrilled to say that all 3 have found loving forever homes. 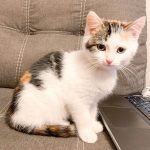 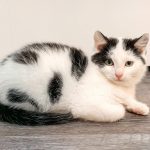 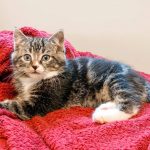