Rescuing seems to run in the MacNeil family.

“I followed my father and uncle’s footsteps as volunteer members to get where I am,” Adam MacNeil, Halifax Regional Fire & Emergency Captain, recalled. “Now, I’ve been a professional firefighter for 17 years. I’m proud to say, my son, Shamus, is also a career firefighter as well in Halifax.”

When Hurricane Fiona hit the Maritimes, the fire department was extremely busy running emergency calls. But one call was rather unique. 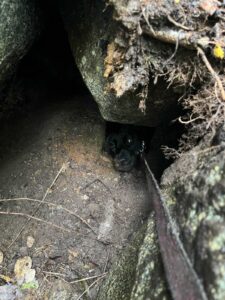 A black lab puppy was stuck under a big pile of boulders at Frog Pond. Captain MacNeil, along with 10 other firefighters, responded.

“We got the call at West Street Fire Station (3) to assist the Spryfield Station (6) with a technical rescue that morning,” Captain MacNeil explained. “They had a puppy that was stuck under a pile of large rocks and couldn’t get herself out. Someone walking by heard her and phoned for help.” 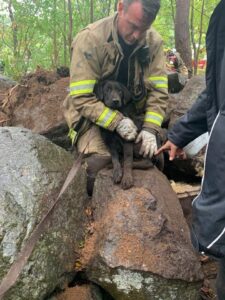 “Engine 6 had made good progress and had a plan in place when we arrived,” continued Captain MacNeil. “When we got on scene we utilized our heavy rescue gear to strap the boulders and lift them out of the way. Once the last rock was moved Firefighter Leclerc and I grabbed her and pulled her free. She was pretty dirty and shaken but seemed okay. We sent her with the Animal Control Officers to be checked over at the vet.”

Captain MacNeil couldn’t stop thinking about the rescued pup. And he wasn’t the only one! 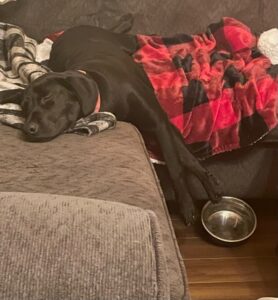 “My sister works as a vet tech at the emergency clinic near the shelter and went to see her after she had heard of the call,” Captain MacNeil shared. “We kept in touch to see how she was doing in the next few days.” 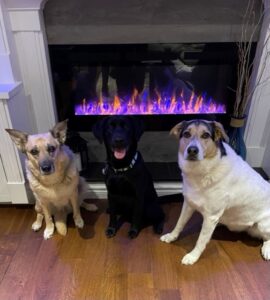 He couldn’t quite put his finger on what it was about the pup that made him want to adopt. Maybe it was the trust they built that day or a special connection… whatever it was, Captain MacNeil knew this pup was the perfect addition to their rescuer family.

They made it official and gave her an adorable name: Jinx.

“Jinx is a ball of energy for sure but learning fast from her new brother Rigby(6) and mama Cinder (13),” Captain MacNeil smiled. “They love the company for sure. Special credit to my wife, Ryan, who puts the long hours of training in, and the other firefighters that were on the call that day: Engine 6 – Captain J. Parsons, FF Leclerc, FF Cromwell, FF Swim, Aerial 3 – Captain Koch, FF Crooks, Engine 3/Rescue 3 – FF LeRue, FF Scott, FF LaPointe, and Chief Robia.”

Now, this rescued pup doesn’t just have a new home, but she has a loving family full of rescuers.

From Thrown Away to Treasured: Sheldon’s Story

The car slowed down just enough to throw something on the side of the highway, then sped... READ MORE about From Thrown Away to Treasured: Sheldon’s Story