The car slowed down just enough to throw something on the side of the highway, then sped away. That ‘something’ was an adorable kitty, partially wrapped in an old towel. Frightened and alone on a busy highway and surrounded by woods with wild animals, the kitty’s chances of survival were slim. He needed a hero to save him. 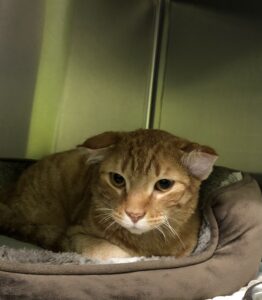 Kim was driving along the highway that day when she spotted something by the side of the road. When she realized it was a cat, she pulled over and coaxed the bewildered kitty into her car. Kim quickly brought him to safety at the SPCA Colchester Shelter. Kudos to Kim for saving this precious soul. 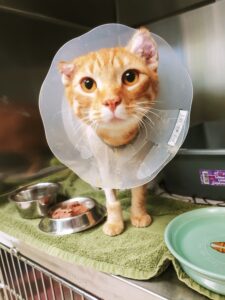 Estimated to be a year old, shelter staff named him Sheldon. You could readily see that something was wrong with Sheldon’s ears. He had aural hematomas – both of his ears had filled up with fluid and needed drainage before they burst. Sheldon was immediately taken to the SPCA’s clinic in Dartmouth. During his surgery, a fractured tooth was also removed and Sheldon started medication for an upper respiratory infection. While he was recovering, Sheldon received lots of yummy food, attention and snuggles from staff and volunteers. 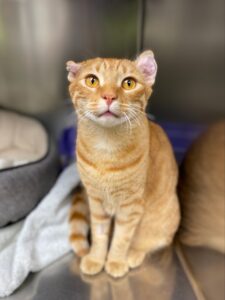 But Sheldon had one more surgery to go. X-rays showed that he had calcified deposits by his right front elbow. They were removed, but there’s a chance they could grow back. He developed a limp due to scar tissue healing, but throughout everything, Sheldon continued to be his happy, affectionate self.

Sheldon’s road to recovery was going to be long, so he was placed in the Foster-to-Adopt Program on September 28th. That’s when he met his second hero who would ultimately nurse him back to good health. Lori and her family were visiting the shelter looking for a kitten. “Sheldon was cute and very friendly. I was drawn to his coloring and his sweet personality. It was hard not to fall head-over-paws in love with him,” recalled Lori. 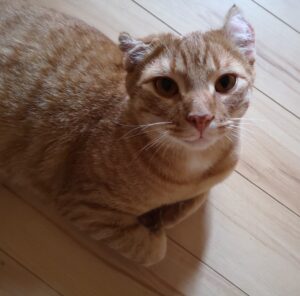 Although the family had adopted cats from the SPCA before, they had never fostered a kitty with medical issues and wanted to ensure they were up to the challenge. SPCA staff thoroughly explained what would be involved in Sheldon’s care. Lori shared “At first, I was hesitant but all I could think was that Sheldon needed love and we could give it to him. We genuinely love cats, which counts for a lot. Also, my husband Patrice and I are retired so we could be there for Sheldon 24/7.” So, the couple decided to open their hearts and home to him, along with Leo, the kitten they also adopted that day.

Sheldon adapted quickly to his new home. “We think he was grateful to be in a loving home,” said Lori.  “Sheldon head-butted me and snuggled within the first hour of arriving home! For the first 2 weeks, we kept Sheldon and Leo away from our 14 year-old cat Nabi. We carefully monitored Sheldon, noting that his cat flu was clearing up and observing his limp to assess progress. At first, I felt “Poor Sheldon, he has a limp that may never go away, but he can actually do anything that other cats do, including 3:00am zoomies!” 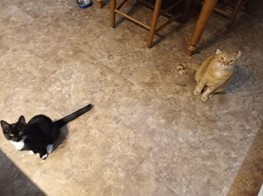 Patrice related “Sheldon and Leo comforted each other from the beginning. They play together and have become best friends. Sheldon tried to play with Nabi, but that didn’t necessarily go well. Nabi tolerates him, but Sheldon is still trying to win him over!” 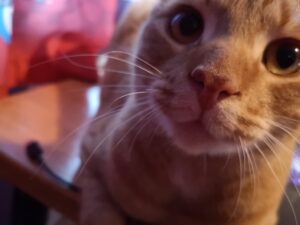 Sheldon is definitely living his best life. Lori shared “He loves to snuggle and give ‘cheeky rubs’ when I’m on the phone or the computer and he has discovered every soft surface in our house. He loves playing with his toys – his favorite being a purple mouse which is now falling apart. He enjoys play-fighting and tag but is just as content looking out the window. Of course, like all cats, he loves to explore his environment, especially if there is something new added to it. Boxes anyone??”

Sheldon has been receiving medicine for his ears. Patrice explained “We’re not sure if he will need these meds for the rest of his life. The vet lets us know what Sheldon needs and we do our best to provide that. He understandably doesn’t like getting his meds. Fortunately, he doesn’t hold any grudges! We take him for periodic check-ups at the SPCA. The staff is very caring and we have a great deal of trust in them.” 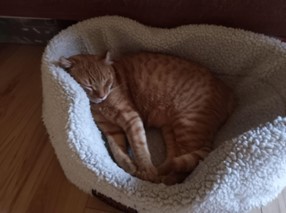 Sheldon has made a huge difference in the family’s life. “He fills our home with joy and laughter and is one of the most expressive, affectionate cats I have ever known,” exclaimed Lori. “Because my sons are older and don’t depend on me as much as they did as children, Sheldon has brought a sense of fulfillment that comes with helping someone who needs me.”

The couple’s advice to people about adopting a pet with special needs? “If you genuinely love animals and have the time to devote to them, do it! You will be richly rewarded. Don’t worry if you’ve never lived with an animal who needs special care. Lack of experience doesn’t mean that you can’t give them a good life. You just listen to the vet and do your best for your pet. If you keep that in mind, it’s easy to do what needs to be done.”

“We are so grateful to the SPCA for bring Sheldon into our lives,” said the couple. “The SPCA played a huge role in giving Sheldon a second chance. They cared for him when he was at his most vulnerable and it was because of the caring nature of employees and volunteers that Sheldon was able to recover and live a good life. If it weren’t for the SPCA and the work they do, Sheldon would likely not even be alive today, let alone be living in a loving home.”

Luckily, Sheldon’s story had a happy ending. Not all abandoned animals are so fortunate. There is NEVER a good reason to abandon your pet. The Nova Scotia SPCA has an open admission policy. They never judge and understand that unexpected life situations happen. If you need to rehome your pet, please call to schedule a time to come in. This allows the shelter to prepare a cozy space for your pet to make the transition as smooth as possible. They understand how emotionally difficult it is to surrender a pet and thank all owners who are able to make the best decision for their pet. Please help us share this important message.