The little piglet was one of fifteen animals being taken by truck to a trader’s market. The animals were ultimately facing a bleak future. Perhaps the piglet decided to take destiny into his own hands and jumped off the truck. Or perhaps he fell. In any case, the piglet’s life was about to change. All because of a circle of love – a caring community – that would ultimately save his life and give him a chance for happiness. 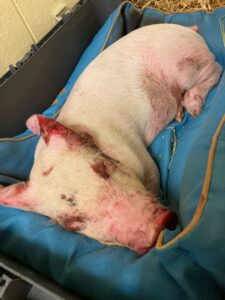 The next day, the piglet was found on the shoulder of the highway by a man driving by. The piglet likely spent the night in the ditch; he had made a nest there for warmth. This Good Samaritan immediately brought the piglet to safety at the Nova Scotia SPCA Kings Shelter in the back of his car. We don’t know the man’s name but want to thank him for his kindness in saving this precious soul.

Because the piglet was found wandering at large, he was accepted into the care of the SPCA under the Animal Control Bylaw for Kings County. Dana, the Supervising Enforcement Officer for Kings County, oversaw the piglet’s intake at the shelter.  Shelter staff named the piglet Newton, in recognition of the role gravity played in his destiny. 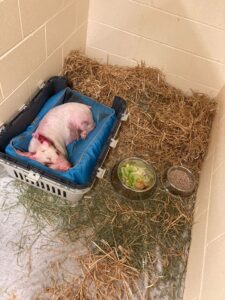 At the shelter, Newton received yummy food, a safe warm place to sleep, and rest after his difficult ordeal. The extent of Newton’s injuries was unknown. Providing him with the required medical care was complex. He needed to be diagnosed quickly and the Kings Shelter is not equipped to do extensive diagnostic tests. It would be a long trek to take him to the SPCA veterinarians in Dartmouth. And while the SPCA employs talented Small Animal Veterinarians, they do not have any Large Animal Veterinarians on staff. Everyone involved felt that the best decision would be to have Newton examined by someone experienced in farm animal veterinary care. In stepped Avon Animal Hospital. 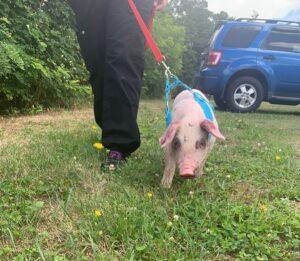 The good folks at Avon saw Newton quickly. They provided an x-ray that confirmed that his injuries were superficial, and they administered antibiotics to prevent infection from his wounds. “We are SO grateful to Avon Animal Hospital for assisting us with Newton’s care,” said Dana. And Avon didn’t stop there! They suggested that once the holding period for the Animal Control Bylaw had passed, the SPCA should reach out to the North Mountain Animal Sanctuary (NMAS).

NMAS is a registered charity located in the Annapolis Valley. Their mission is three-fold: 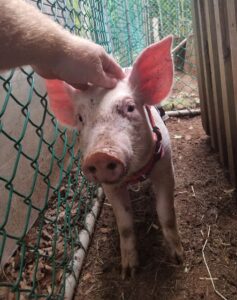 The Sanctuary currently provides shelter for goats, rabbits, pigs, chickens and many other animals. They are funded 100% by the generosity of caring individuals. I caught up with Amanda Dainow, the co-founder of NMAS. 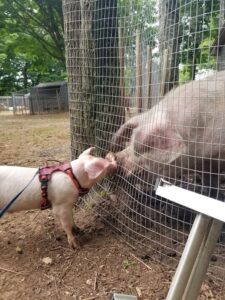 “We gave Newton a new name for his new lease on life,” said Amanda. “We named him Sugarbear to reflect his sweet nature and in honor of another rescued pig at a different sanctuary. Sugarbear is fed pig grain and vegetables several times a day and is allowed to run around in a large, fenced area to meet human and animal friends, including other pigs. He has a doghouse with hay and is transitioning to the pig area with an insulated barn. He receives lots of attention and loves to follow us around.”

Sugarbear is definitely thriving in his new forever home where he will live out his days in peace and happiness. Amanda shared “He is very energetic and loves exploring. Once, he even herded the sheep – we weren’t sure if he wanted to be a shepherd or a fitness coach!” chuckled Amanda. His two best pig friends are Wiggly, a 9-year old 500-pound pig and Lola, a 9-month old. Check out some of Sugarbear’s heartwarming Facebook videos by clicking these links: August 26. September 2. September 16.

Learning about the circle of love that surrounded Sugarbear reminded me of the saying “Teamwork Makes the Dream Work.” Along with kindness from a caring community, the paws-itive partnership between the SPCA and NMAS is a great example of two animal rescue organizations working together to save more lives and give more animals the chance for happiness that they deserve.

If you’d like to sponsor Sugarbear at NMAS, please contact them at info@nmas.ca. NMAS is always looking for volunteers. If you’re interested in helping support their compassionate mission, visit their website here or contact them at info@nmas.ca. Please note that the Sanctuary is not open to the general public. Amanda is a Clinical Herbalist with Certification in Holistic Animal Care. She makes and sells Bottom of Form natural products and conducts annual Plant Walks as fundraisers for the Sanctuary. Check out her website here.