When pets are adopted and leave the shelter, sometimes we never see them again. It can be very bittersweet. Although it may be a goodbye for our shelter staff and volunteers, it is the beautiful beginning of a new chapter for that pet.

Some families send adorable updates. Others may even drop by to visit. But usually, that’s it – and it totally makes sense. They have shed their past and are looking forward to their future. 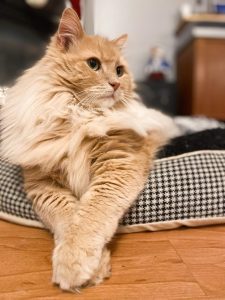 Well, except one. One cat broke that status quo. Not once. Not twice. But three whole times!

Ollie was a stray kitty struggling to survive outdoors. He earned the nickname “Triple” because he ended up back at the SPCA three times.

We wondered why Ollie became the cat that came back. Now, we know. He was waiting for Karen. 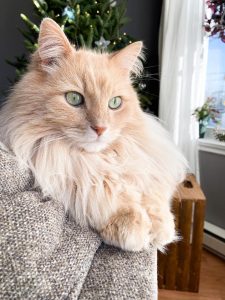 When Karen dropped into the shelter, she wasn’t expecting to adopt. Her heart was still recovering after losing her first SPCA kitty, Pierre, to heart disease. “I was just going to give some kitties some love,” Karen shared. “Once I saw Ollie’s face however, I knew I had to take him home. I was able to hold him, and he just melted into me.”

It was a perfect match. That is… until Liz entered the picture and shook things up. 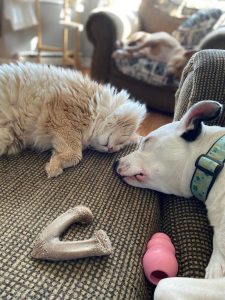 “When Karen and I first started dating, Ollie was not a fan of me as I took over his spot on the couch and bed,” giggled Liz, Karen’s wife. “After a year or so of having my things peed on, I won Ollie over with love, cuddles and of course his favourite treats, Temptations Chicken Flavoured Cat treats.”

They ended up becoming the best of friends. Ollie even became Liz’s reliable study buddy. “Anytime I would take out my laptop and textbooks, Ollie was not far behind,” Liz joked. “He was such a good cheerleader and sometimes a needed distraction.” 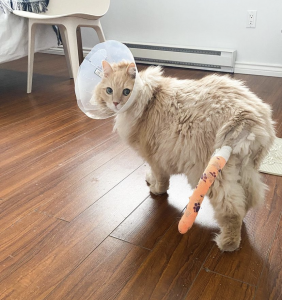 Talkative and food-obsessed Ollie did have an unfortunate accident in 2021. He hurt his tail on the stairs and needed to be rushed to the veterinary hospital. “For a month or so, we went down and had a new bandage put on every three days,” said Karen. “Now whenever we go to the vet clinic, all the staff ask how he is doing. You might say he’s attained rock star status!”

“Ollie definitely considers himself the leader of our little pack,” Liz added. “He likes to make sure everyone is ok and, especially, that they are not eating his food. Ollie has taught us that when life is busy, it is ok to take a break and get some cuddles.” 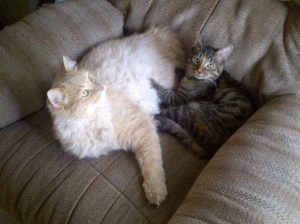 Ollie has also taught Karen and Liz all about unconditional love. “On some of our worst days, that cranky old man would know and either give head butts or cuddles,” explained Karen. “He’d make sure you could hear his purr and be by our sides.”

“Some of my favourite memories with Oliver include us laying in bed, both of us tucked into the blankets and watching tv, or sitting on the deck at our house sun tanning,” Karen continued. “He also loves galloping throughout our house at nighttime. Between him and his sister Abby (also a rescue from the Dartmouth location), sometimes it sounds like baby elephants running around.”

“We’re both so grateful that Ollie came into our lives,” Karen exclaimed. “He’s got so much spunk and energy for being a 16-year-old cat. We think he’s going to outlive us all!”

Thanks to Karen and Liz, Ollie was able to retire his “Triple” nickname. Ollie went from the streets, to the shelter 3x, to now having 3x as much love in his life.