When you think of the word superhero, what comes to mind? Maybe comic book characters like Wonder Woman or Batman. Or perhaps a beloved family member or friend.

But pets may be the ultimate superheroes. Although they don’t have capes, their adorable wet noses and unique personalities bring comfort and joy. And sometimes the saving is more literal, like when a mama cat rescues kittens from a house fire.

Bria was a young stray cat who had a rough start. At only two-years-old, she was hit by a car and left with a huge scar on her back and her ears. Thankfully, a kind animal lover found Bria and began to care for her. 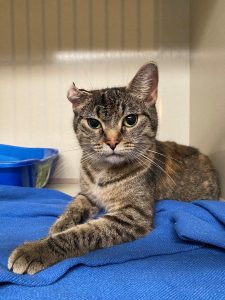 The family began feeding Bria and letting her into their house. To their surprise, Bria was pregnant! She had a litter of kittens and would bring the kittens in and out of their house. The family reached out to the Pictou SPCA and booked an appointment to bring Bria and the babies in.

But the day before they were supposed to bring Bria and the kittens in… their house burnt down.

The family was devastated. Bria and the babies had been inside when the fire started. They searched around the community and couldn’t find them. They were heartbroken.

A few days later, the family returned to the house to see what could be salvaged. They were shocked to see Bria proudly walking out of the woods with ALL of her babies. She somehow managed to get all five kittens out of the house and keep them safe. Bria and the kittens joined the SPCA Foster Family program to prepare everyone for adoption. Once they were all strong and healthy, they were spayed/neutered thanks to our friends at PetSmart Charities® of Canada. This way, there wouldn’t be any more accidental litters and they could live happier, longer lives.

Now, here is where Angela comes in. 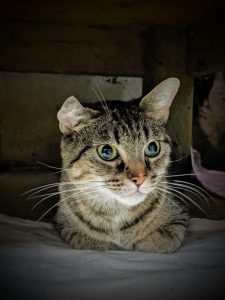 “We started looking for a cat to add to our family a couple of months ago,” Angela shared. “We weren’t picky about gender or color or anything, but we did know that we wanted to adopt an older cat who would have more trouble getting adopted. I’ve worked in rescue for a long time and I know that the babies always get scooped up while the older ones get left behind.”

Angela and her husband found many cats along the way, all full of potential and love, but she kept saying “We’re going to find one and know that that’s our cat.” And then fate stepped in. At the bottom of the adoptions webpage was Bria’s picture and bio. 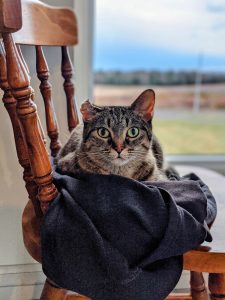 “I was immediately in love with her big green eyes and her little crinkled ear,” Angela smiled. “I read her story and texted my husband and said ‘I just found our cat.’ I knew before I met her that we were taking her home but when my 4-year-old daughter and I went to meet her she was so sweet and loving it just sealed the deal.” 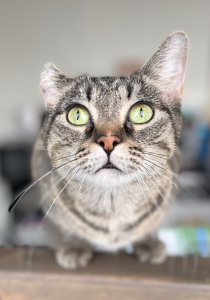 Bria began to settle into her new home and took an instant liking to the basement. “Sometimes we’d hear her yell ‘hellooo!’ from the basement – seriously, her meow sounds like she’s yelling hello,” giggled Angela. “We’d go down to play with her and give her some love. So far, that meow is one of our favourite things about her. It cracks us up every time.”

“She finds an immense amount of joy zipping around the house chasing her ball around (and we do too watching her),” Angela shared. “She is absolutely in love with my husband. She curls up with him to sleep at night and if he puts any of his clothing ANYWHERE she finds it and lays on it. She loves watching me cook supper and trying to sneak taste tests hahaha.”

“Bria is such a special girl,” Angela beamed. “She’s been through so much in her short life and is still tough as nails. When she met our two big dogs if one grumbled at her she didn’t even flinch. We feel such a connection to her and after what she’s been through we’re committed to making sure the rest of her life is the comfiest it possibly can be.”

“We also want to say how much we love and appreciate the SPCA for what you do,” Angela continued. “It’s not an easy job and we are grateful for the people that do it.”

“My husband is a firefighter… just like her. And my daughter tells everyone she sees that her kitty is a superhero. Bria really is an inspiration, and a reminder that life can be so, so tough, but you can make it through and still come out on the other side and spread love and happiness.”