Imagine yourself standing before a swinging rope bridge that crosses a deep ravine. You look down and your heart leaps into your throat. A stranger on the other side encourages you to cross, telling you it’s safe. They hold out their hand and say you can trust them. But fear makes it hard to take that first step.

And so it goes with some homeless animals whose lives have not been filled with the care, love and attention that they deserve. Their fear is often greater than their hope of finding love. We need to build a bridge of trust between what was and what can be before an animal can take their first steps towards a new life. 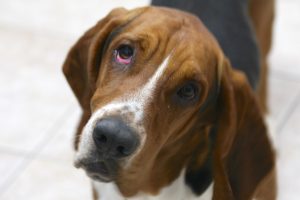 Take Roland for example. This sweet one-year old Basset Hound was surrendered to the Nova Scotia SPCA along with two of his brothers on November 1, 2019 in hopes for a better future. His two sisters had passed away from Parvo virus, so Roland and his brothers were quarantined as the virus is very contagious. Thankfully, they tested negative for Parvo, but emotionally, the dogs were fragile – scared, nervous and extremely under-socialized. Roland was the most timid and as well, he was very underweight – you could see his ribs and spine. With medical care and TLC, Roland’s brothers progressed well, but everyone knew that Roland would need a special home filled with love, patience and understanding. One Saturday in November, Laura Josey was volunteering at the shelter and Roland’s life changed. 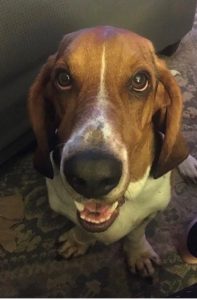 Laura and her fiancé Tavis had talked about adding a dog to their family and when she met Roland, it was game over. “As soon as I saw his sweet face, he had my whole heart,” said Laura. “I started getting our house ready and researching how best to build Roland’s trust and confidence. I wanted to give him the loving home he deserved and help him on his journey to happiness.”

Once they brought Roland home, the couple realized just how new everything was to him. “He was scared of the couch, wouldn’t go up the stairs and was terrified of the television even when it was off,” related Tavis. “He would slink through the house low to the ground like a cat. Eventually, he picked his safe space, a corner in our dining room.”

For the first 2 weeks, Laura spent time sitting on the dining room floor with Roland, talking gently to him and getting him comfortable. She explained “I slowly started inching his bed into the living room. It took me 5 weeks to get Roland in there with the TV on, and it was actually Christmas Eve when he officially conquered his fear of the big scary television.” 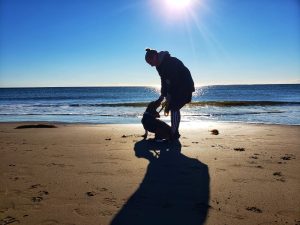 Laura started taking Roland for small walks and slowly increased how far they went, with lots of encouragement and treats involved. “Roland didn’t wag his tail until about three weeks after we brought him home and when he finally did, I cried tears of joy,” shared Laura. And every day since has been a step forward in Roland’s amazing transformation. Now Roland loves exploring on walks, mainly with his nose. Laura chuckled “A 20-minute walk can take us twice as long so he can sniff everything along the way!”

“When we first brought Roland home, he didn’t bark at all, but now he sure does!” laughed Tavis. “We’re just waiting for him to perfect his howl, which we will probably regret when he does! He has two large baskets of toys he loves ripping to shreds (thankfully, he doesn’t try to eat them). It takes Roland a little while to warm to people but we’re very lucky that our friends and family are so caring and patient. We keep treats at the front door for anyone visiting to win him over, since he loves food!” 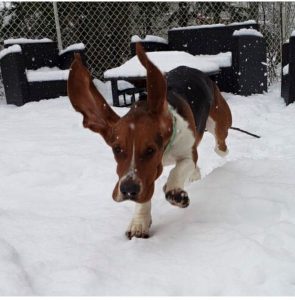 Roland is definitely living his best life. He’s now the happiest little guy with a huge personality. He even played an important role in Tavis’ proposal to Laura (find out how below!) And he has his own Instagram account that Laura created to post updates on his progress and hopefully, inspire people. Today, Roland has over 400 followers!

Yet among the milestones Roland is achieving, reminders of his past still surface. “Roland is not fond of men, and he is still afraid of reusable grocery bags and black combat-style boots (which my fiancé has to wear to work every day), so desensitizing him to these things is still a work in progress,” said Laura. 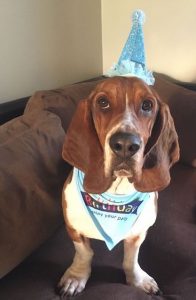 I asked Laura what Roland has brought to her life. “He’s my best friend, my secret-keeper and a huge source of laughter when I need it most. My fiancé is in the Navy and is often away for long periods, and Roland never lets me feel lonely. The second anniversary of Roland’s “Gotcha Day” is November 19th and the day before is both of our birthdays! We’ll each have our own cake and presents, of course, and go for a walk around the lake.”

What lesson does Roland’s story teach us? Laura replied “Animals like Roland have so much love to give and sometimes they require a little extra care in order to shine. All you need is love and patience. There will be tough days, but the good days far outweigh them.  Just watching their ‘firsts’ is amazing – wagging their tail, playing with a toy, doing ‘zoomies’ or just finding their bark – it’s incredibly rewarding.”

The couple’s final thoughts? “It hurts our hearts to think of what Roland’s life would have been like if not for the Nova Scotia SPCA. Their dedication and commitment make a life-changing difference for animals like Roland every day.” 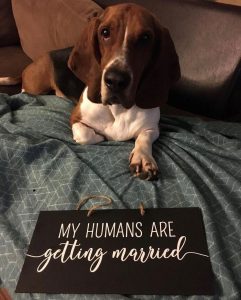 “It was a Friday afternoon, Tavis picked me up from work and we headed home as we normally do. I was first through the door and as usual Roland was waiting on the couch to greet us, but I noticed something hanging off his collar. At first I was worried, thinking he had gotten tangled in something but as I got closer I could clearly see what it was. It was a note that read “Will you marry my Dad?” I immediately turned around to find Tavis on one knee. It was perfect and I of course said yes!”

“I let Roland out one morning as I usually do at 6am and seconds later I heard him making his Chewbacca screams (the noise he makes when our cats don’t want to play with him). He was desperately trying to make friends with a raccoon, playfully chasing it in circles around our yard. I eventually caught Roland but not before falling in the mud dressed in my work scrubs, which gave the tired racoon time to climb up and over our fence.”

“As Roland’s confidence builds, he will often take what I call ‘little tours’ around the house by himself (I still think he’s checking the place out) and sometimes he’ll stop and get really quiet just like a small child. I assume he’s getting into trouble and he usually is! His favourite stealth moves are to steal insoles out of sneakers or socks out of the laundry.”