In September 2020, Nova Scotia was hit with a powerful storm – Hurricane Teddy. With forecast warnings of strong winds and heavy rain, schools were closed and public transit was suspended. It was recommended to stay away from the coast and bunker down for safety.

But that is impossible for a homeless baby kitten. 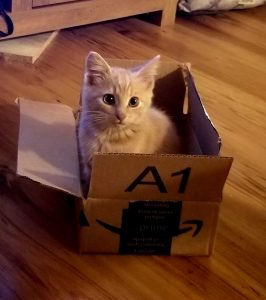 Angus, a kitty weighing a little over 1 pound, was found alone on the road the next day. He was cold to touch, unable to stand, and cried when he was picked up. Angus needed emergency care… and fast.

“Staff weren’t sure he would survive the night,” shared Bryanna, a dedicated staff and foster for the Kings SPCA. “Angus’s temperature was extremely low, causing his body to start shutting down, basically unresponsive.” 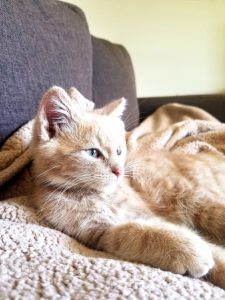 Angus was rushed to the vet where he received lifesaving medicine and a personalized plan that included constant contact with heat packs to hopefully bring his temperature up.

“Naturally a staff member had to take home for the night,” Bryanna explained. “He was burrito-ed in a towel, with his heat packs, covered with an electric blanket. Around 8pm that night I checked in on him and he was starting to get more responsive. At 10pm check-in he busted out and devoured an entire can of wet food AND came over for snuggles!” 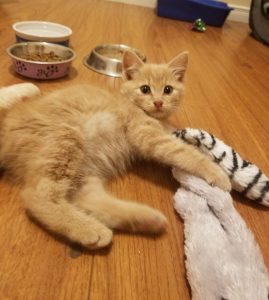 Things were looking promising but Angus wasn’t out of the woods yet. “The next morning we started fluids twice a day, temperature checks twice a day, and supplemental feedings as after his initial feast we had some issues eating regularly,” said Bryanna.

And that’s not all… Angus was covered in fleas and filled with worms. He received treatment to help his belly feel better and started to show off his adorable personality. Once he was medically cleared Angus was even able to spend some quality time with his foster brothers (Remember Ronald and Melvin who were both Paw Print feature pets themselves?) 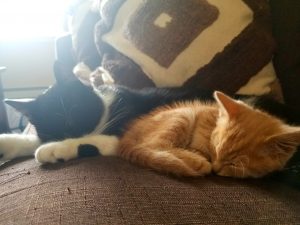 “Angus was one of my favorite fosters from the last 3 years!” Bryanna smiled. “It’s always hard for staff when we take home critical care kittens like Angus because you usually have to prepare yourself for the worse. Honestly, we didn’t think Angus would make the night based on his condition on intake. So that night when we bolted from the kennel was a good feeling. We ended up snuggling for a few hours and watched movies.” 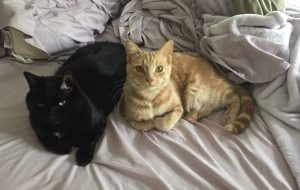 After a month of care, Angus was ready for adoption. He put his painful past behind him and found a new family where he was given a brand-new name. 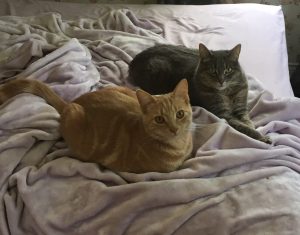 “I changed his name to Loki and he is such a cutie,” Tammy, his fur-mama, shared. “He is timid with strangers but fearless with his brother, Onyx, and sister, Bella. I was super shy as a child so he reminds me of myself sometimes.”

“Loki has lots of love to give when he’s not too busy playing,” continued Tammy. “He loves lounging on the 10’ x 12’ enclosed Catio. He even naps out there, tucked under the plants.”

This kitty went from having no name, family, or home, to having two cute names, a caring foster mama, and a forever family. Now, he can look out at any future scary storms from safe, loving arms.

Feeling inspired? Learn more about how to get involved and help by clicking here.