Anyone who has adopted a homeless animal knows that they are a true gift, bestowing unconditional love, laughter and joy on their adoptive family.  Some remarkable animals are so grateful for their forever homes, that they pay it forward by giving the gift of love to other homeless animals. 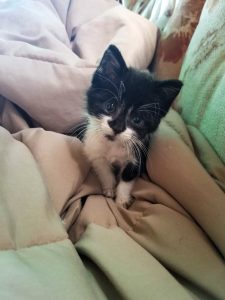 Case in point, Melvin.  Here’s his amazing story.  Melvin was found alone, afraid and huddled under a car in someone’s driveway.  A kindhearted person brought him directly to safety at the Kings SPCA.  At only 4 weeks old, Melvin was so tiny, weighing only 0.4 kg!  He was very dehydrated, starving and covered in lice.  He also had a bad case of upper respiratory infection. 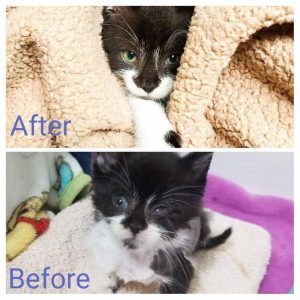 Due to Melvin’s condition upon arrival, SPCA staff were not sure if he would make it. However, with ongoing round-the-clock care including fluids, medications and syringe feedings every 3 hours, he survived. After several months of supportive care, love and attention in a foster home, Melvin was given a clean bill of health and continued living with his foster family until he was able to be put up for adoption. 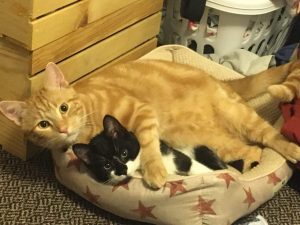 His foster mom Shelby Peters recalls Melvin’s brave road to recovery.  She shares “When he first came to our home, Melvin had to be quarantined since he was sick.  He was so small and helpless. His body was shaved because he had lice and he was very congested with a respiratory infection.”  Shelby goes on to say “As he got better, he was allowed around our other cats, including my sister Bryanna’s cat Ron.  Ron is a special-needs kitty – he had to have one of his legs amputated due to injury – who was also adopted from the SPCA Kings Shelter.” 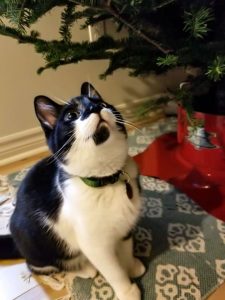 As Melvin recovered, his big personality started to blossom.  “He and Ron became best buddies,” relates Shelby.  “Despite his small size, Melvin was feisty and wouldn’t back down when rough-housing with Ron.  Ron babies Melvin and was more than happy to teach him what being a cat was all about.  He even taught Melvin a few bad habits!” chuckles Shelby. “It took Melvin longer to warm up to our other cat Guinness, but they get along well now.” It was clear that Melvin also loved people and was a real cuddle-bug, regularly curling up around Shelby’s neck and turning into a little purr machine.

“Melvin was with us for several months while he was getting better and by the time he was well enough to be put up for adoption, I had fallen completely in love with him and decided to adopt him myself,” shares Shelby. 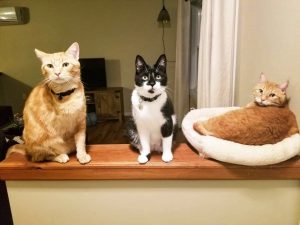 Besides being full of love, Melvin is full of surprises.  “Our biggest surprise was how Melvin took to all the kittens I have fostered,” says Shelby.  Sister Bryanna relates “Melvin’s a carbon copy of ‘Mama Ron’ who helps me with orphaned foster kittens.” “Melvin loves to watch and play with the foster kittens.  He’s still pretty much a kitten himself, so he loves to play,” shares Shelby. “We currently have a senior foster dog named Bubba.  When they were first introduced, Melvin was a big scaredy-cat, but now they get along great. In August, we moved into a house with an acre of land so he gets to go outside now – closely supervised by me – and loves exploring the property and playing outdoors.”

“Melvin is a true gift; he has brought a lot of joy and energy to our home,” Shelby relates. “He is very mischievous, so there’s never a dull moment when he’s around.  He’s always working on his play-fighting skills, hoping to beat his big brothers one day!” There are even more of Melvin’s high-jinks below.

Thanks to the constant presence and support of the SPCA, Melvin is now a healthy, spunky boy and has a family that truly loves him.  Please give other homeless animals like Melvin a chance to live the life they deserve.  Be a hero and donate today to help the next pet in need