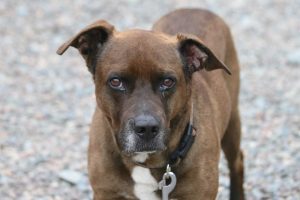 When Rex came to the SPCA he was in extreme pain. Have you ever heard of total ear canal ablation and bulla osteotomy? It’s a mouthful! Sadly, this is the surgery that poor Rex needed because his chronic ear infections were not able to be resolved by his previous owner.

Despite everything Rex had been through, he still had a lot of love to give. His specialty was… hugs.

Rex loved giving SPCA staff and volunteers hugs throughout the day. It didn’t matter if he had just met you and was greeting you or if he finished playtime and wanted to thank you. His hugs made so many people smile and brought joy to everyone at the shelter.

One of those dedicated volunteers was Rob. “The first time I met Rex was on a volunteer shift in the spring of 2019 and he had just arrived,” remembered Rob. “He looked at me and was so happy and loving. He gave me a famous Rex hug.”

Rob knew right then and there that he wanted to adopt Rex and give him a second chance at a safe, happy and healthy life. 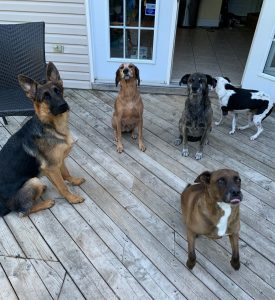 But Rex needed to wait a little bit longer for two important reasons: 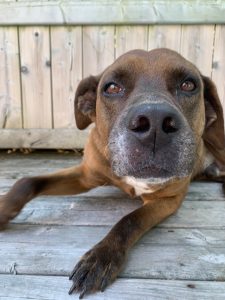 To check the first thing off the list, Rob brought their dogs to the shelter for a meet-and-greet. It went wonderful! “All the dogs got along very well at the start and bonded well together as a pack,” recalled Rob.

Next up was Rex’s surgery. “When Rex arrived he had some serious medical issues with his ears,” Rob said. “However, because of the awesome people at the SPCA, he was able to get the proper medical attention he needed.” The surgery cost nearly $2,000. Being proudly no-kill, the SPCA takes on complicated and costly situations like Rex’s to help hurt shelter pets.

Just over a month later, Rex was finally medically cleared and was able to be officially adopted.

Even though he has a furever family now, Rex hasn’t stopped his hugging ways. He sometimes even uses his adorable hugs to pay it forward for the next pet in need. “I particularly remember when Rex and I were representing the SPCA at a fundraising event at a local pet store and Rex ran up to every single person that walked in to greet them,” giggled Rob. “He made such an impression that many people asked how they could adopt him.”

Rex’s unconditional love helped complete the family. “He has had a tremendous impact in our lives and none of it would have been possible without the folks at the Dartmouth SPCA,” smiled Rob. “For anyone considering bringing a dog, or another animal into their lives, we strongly encourage people to visit their local SPCA and provide a dog or cat with a loving and caring environment. In seeing these animals express their affection, you will be happy you adopted them!”

“For us, we couldn’t be happier to bring Rex into our home and the affection he gives shows us we did the right thing,” Rob continued. “Rex is the definition of the saying ‘a dog is the only thing in the world that loves you more than he loves himself.’”

Shelter pets like Rex require extra time, care and expensive medical treatment. We are so grateful for generous donors and supporters who help us help them. We couldn’t do this without you!