It’s been said that good things come to those who wait.  There’s a special kitty who knows this is true.  Her story began in April 2019 when she was surrendered to the Pictou SPCA by her owners as they were no longer able to care for her. 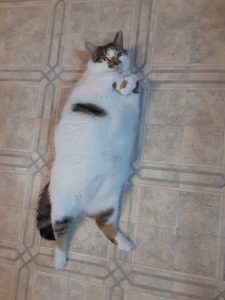 At approximately 5 years old, Ginny had severe dental disease.  She was in a lot of pain so all her teeth had to be removed.  After being on antibiotics for several weeks, she finally started to feel better.  But Ginny was still very frightened and timid.  It took her a long time to warm up to shelter staff and volunteers.

Over the next 3 long months, Ginny watched as people passed her by to adopt other cats.  She was often overlooked as she was quiet, introverted and would hide in her kennel all day.  All she could do was wish for a special family who would look into her eyes and see the sweet loving soul inside.

In July, she was adopted but sadly, was returned two weeks later as she was so scared in the home that she never came out from under the bed.  Would Ginny’s wish ever come true?  On August 3rd, it did!  Ann Archibald and her husband Al were out for a drive and decided to stop in at the shelter for a visit. “We had recently lost two of our beloved strays – Kahlua and Buddy – to illness and weren’t ready to adopt as our hearts were still broken,” shares Ann. “Then one of the staff introduced us to Ginny and it was game over.  We felt so bad that Ginny had been at the shelter for so long and then returned through no fault of her own,” Ann relates. “We made up our minds that she was coming with us to her forever home and would never be going back!” 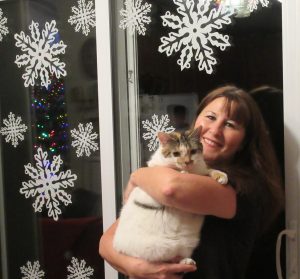 “We knew that Ginny would need lots of love and patience,” says Al.  “We set her up in her own safe room with a big bed and lots of toys.  We spent an hour that evening laying on the floor talking softly to her and coaxing her with food to come out from under the bed.  She finally did and incredibly after that, she was never afraid of us,” he continues.

The room remained Ginny’s safe zone for a few months to use whenever she wanted.  “We were very careful how we introduced Ginny to our dog Minnie and other cat Precious.  It took her some time to feel comfortable around our other fur-babies, but calm settled in once they realized that Ginny was the new boss in the house!” Ann chuckles.  “Our sweet Minnie has since passed away but a new stray kitty – Patches – has recently joined our family and Ginny has definitely taken a liking to him.” 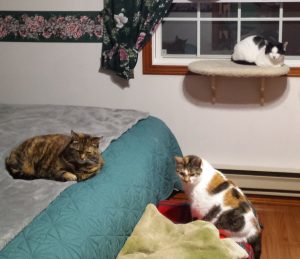 The presence of the right family helped Ginny to open up, trust and thrive.  “Ginny’s personality has blossomed ten-fold since being adopted,” shares Al. “She is a very playful happy cat these days.”  Ann adds “Ginny enjoys playing with her catnip fish, exploring boxes and bags and being brushed. She is very affectionate and jumps up on the sofa beside us each evening for cuddles.  Her all-time favorite thing to do is eat!  She’s put on some weight since being adopted and even though she has no teeth, it doesn’t stop her from eating kibble which she likes better than soft food!”

The couple says that Ginny has enriched their family. “She is so adorable and a delight to be around every day.  We never know what she’s going to do next to give us a laugh or put a smile on our faces,” they relate. “We are grateful to the SPCA for their loving care of Ginny and for never giving up on finding her a forever home.” They encourage people not to pass up shy or older pets when adopting.  “They will be a great addition to your family and will bring you years of unconditional love and joy.”

If homeless animals could talk, they would tell us that the greatest present is a forever home where they feel safe and well-loved.  Your gift to the SPCA can help make happily-ever-afters possible for homeless animals like Ginny.