June 16th, 2019 was a dark day even though the sun was shining bright. That’s the day that someone perpetrated a malicious, senseless act of cruelty on an innocent cat – Phoebe.  Many of you may remember Phoebe’s heartbreaking story; we know you will be thrilled to read about her happily-ever-after. 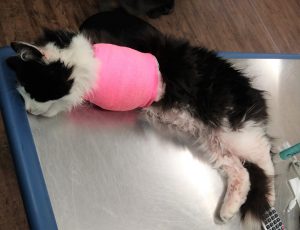 That dark day, SPCA Cruelty Officers responded to an emergency call and rescued an injured black and white cat on Gillis Lane in Dominion, Cape Breton. It was clear that Phoebe’s leg was broken but x-ray scans showed that the trauma was much worse. Phoebe had been shot with a .22 caliber gun. The bullet went through her back leg into her front leg, shattering the bone.

Phoebe was rushed into emergency surgery at the SPCA Cape Breton Animal Hospital where, sadly, her front leg had to be medically amputated to prevent a lifetime of discomfort.  Over the next few weeks, Phoebe recovered under close medical supervision by the shelter’s veterinary team.  Staff and volunteers alike worked hard to re-build Phoebe’s trust of human beings as they showered her with love and attention.  Her sweet personality was emerging more and more every day. Slowly, she started to adjust to life with only three legs. 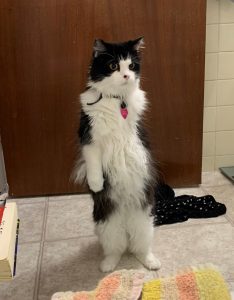 Phoebe’s complicated surgery was a huge undertaking for the Cape Breton SPCA because the SPCA does not receive any government funding for their shelters.  Her case touched many people’s hearts. The community of Cape Breton and animal lovers throughout Canada and beyond came together to help Phoebe and the SPCA is truly grateful for their compassionate support. 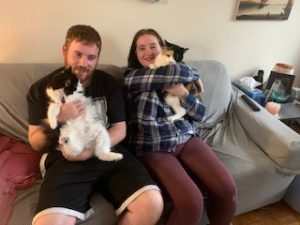 The very day that Phoebe was medically cleared for adoption, she found the purr-fect forever family!  Kelly MacKinnon and her partner Ethan Black had been following Phoebe’s journey and had already contacted their veterinarian to learn how to care for a pet missing a leg in case they were the lucky ones to adopt her.  Kelly shared “When we saw Phoebe’s story on Facebook, we instantly fell in love and wanted to adopt her.  We were drawn to her bright eyes and sweet face and were inspired by her strength and bravery.  We knew she needed a special home filled with patience, love and attention.  We wanted to give her the life she deserves, away from the cruel thing that happened to her.” 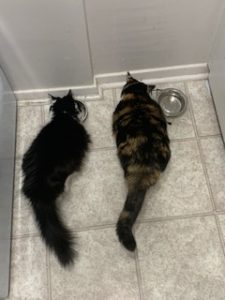 “Phoebe adapted nicely to her new home,” reported Kelly.  “There haven’t been too many challenges with her amputation, but we did start arthritis prevention immediately.” And the lack of a leg hasn’t slowed Phoebe down. “She creates her own make-shift staircases to get where she wants to go. One night shortly after we brought her home, she went into the closet and when we looked up, she was walking across the hangers. Since then, we keep closets closed as we worry about her falling,” said Ethan. 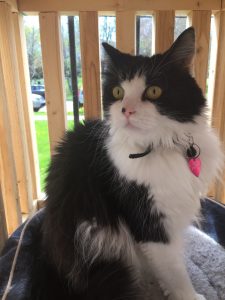 Phoebe is absolutely spoiled with lots of toys, beds, and yummy treats. She even has a fur-sister, Jane, who was also adopted from the Cape Breton SPCA. “Jane and Phoebe get along well and play often. They love being outside in nice weather in their special ‘catio’ where they can be safe while lounging in the sun for a nap,” stated Kelly.

“We constantly marvel at Phoebe’s bravery,” said the couple.  “We would encourage anyone thinking about adopting a special needs pet to do so if they can! It’s tremendously rewarding – they teach us about strength and resilience and every day with them is better than the day before.”

Phoebe found a family who truly loves her. She learned that people can be loving and kind. If you’re reading this, you must be one of the good ones. You can help abandoned and abused pets like Phoebe to put their painful past behind them and give them a happy and healthy future.

Be a hero and donate today to help the next pet in need.

The person who did this to poor Phoebe has not been found to date, so the SPCA still needs your help to fight for justice. They hope that the passage of time will encourage someone to come forward with what they know – it’s never too late to do the right thing and the smallest piece of information may be just what is needed to advance the investigation.  Anyone who has any information, or who may have witnessed the incident, is urged to call the SPCA’s confidential toll-free hotline at 1-888-703-7722, e-mail animals@spcans.ca or fill out the online form here.