On September 1st last year, a kind person found a ruggedly handsome cat wandering stray and brought him to safety at the Pictou SPCA. Around eight years old, the poor boy had clearly lived a hard life on the streets. He was malnourished, his fur was matted, and he was extremely scared and shy. The person who rescued him believed that the cat was being picked on by people in the neighborhood, which caused him to mistrust humans. Shelter staff named him Pat. 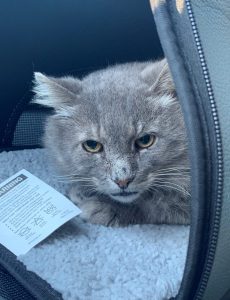 At the shelter, Pat got the first loving touch he likely had in years. Staff and volunteers showered him with love and attention and worked hard to re-build his trust of people. He was super-sweet and gentle, yet he waited patiently for two months for a loving family to take him home. You see, Pat had tested positive for FIV (Feline Immunodeficiency Virus) – a virus that weakens a cat’s immune system and that he likely got by being bitten by an FIV+ cat while stray. FIV+ kitties are often overlooked. Yet, FIV+ cats have potentially the same lifespan as other cats and with a stress-free environment, they can live full, happy, healthy long lives. To prevent spreading the virus, FIV+ cats must be indoors only and be either the only cat in the home or join other FIV+ pets. 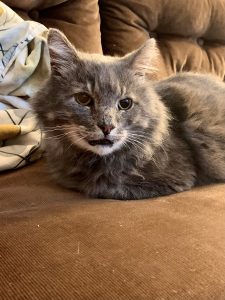 Pat’s wait was definitely worth it. On November 2nd, he found the purr-fect family! Deanna and her husband Arko went to the shelter hoping to adopt a young healthy female cat. Deanna chuckled “Instead, we came out with an older male cat with FIV+! It’s definitely proof of Pat’s charm!” She explained. “When I opened his kennel to pet him, Pat was so happy to see me. He immediately started rubbing his head against my hand and there was no way we could leave him there!” 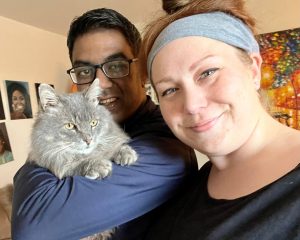 “Being FIV+ didn’t affect our decision to adopt Pat at all,” related Arko. “We had lost our beloved cat Mr. Kitty the year before. He was FIV+ but it never seemed to affect his health. He lived to be almost 18! The last year of his life he began having audiogenic seizures, so we lived a very quiet life for his benefit.” Deanna added “Being someone who’s had many pets over the years and has dealt with FIV, I felt like I was more equipped to deal with Pat than, maybe, a first-time cat parent.”

Deanna shared “When Pat first arrived at his forever home, he definitely looked worn out. His eyes were tired, he wasn’t cleaning himself well, and his fur wasn’t full or fluffy. As soon as we got him home, I sat with him on the couch and we had a cuddle. He rubbed his face against me like he’d never had a mom before!”

The couple felt that Pat should have a new name for his new start in life. “It took us a while to pick the purr-fect name for our boy,” said Deanna. “He’s so special and intelligent, but he’s also sooooo silly! I found myself calling him a silly goose way too often and Goose just stuck! He’s also called Goosie, Goosie-Goo, Goose on the Loose and Loosey Goose!” 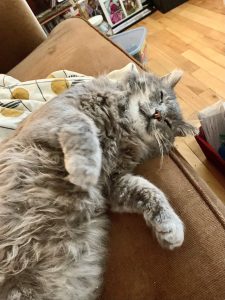 “The year before we adopted Goose was tough – Mr. Kitty passed away and so did my father-in-law,” shared Deanna. “Goose was full of unconditional love and exactly what we needed at exactly the right time.” Arko added “We knew we had to be patient in terms of him adjusting to being in a home environment and in trusting us. So, we let him be where he wanted to be. He hid for a while in cupboards and closets, but slowly came around. We gave him his space and made sure he always felt safe. Now he stays in whatever room we’re in – he never wants to be alone!” 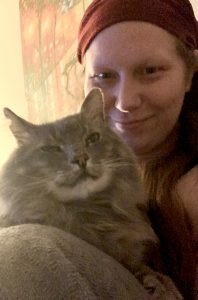 Goose is definitely living his best life. Arko shared “He enjoys cuddling, sleeping across your face, playing with his toy mice, watching tv, listening to music, chirping at us and giving kisses. He constantly makes us laugh. We keep a full-size suitcase laying down because it’s his favorite bed! And if you walk away from him and he’s not finished playing, he’ll tap your legs and chase you! Goose’s health is good. He gets the odd mild cold, but he doesn’t even seem to notice. One of his eyes waters occasionally and we simply keep it wiped for him. We don’t see FIV affecting him in any other way.”

Goose’s transformation has been remarkable. Deanna exclaimed “He’s not only grown a glorious mane but he went from fearful, shy cat to a cuddly boy who always wants to be with us. His eyes are always full of love. We’re so proud of our Goosie, how far he has come, and how well he fits into our family. This is Goose’s house as much as it’s ours!”

The couple are grateful to the SPCA for giving Goose a second chance at happiness. “In addition to the excellent care he received at the shelter, we could tell that the staff genuinely loved him. On Goose’s adoption day, everyone came to say goodbye to him before we left. Thank you for bringing Goose into our lives; he’s an amazing kitty who’s going to retire as the happiest cat ever! You guys are AWESOME and we’re grateful for what you do every single day.”

Thanks to you, Goose is living his happily-ever after.  Please help other homeless animals like Goose by donating today.