When you think about cats, what characteristics come to mind?

But have you ever met a cat that acted more like a dog? Now you have! This is Freyja G. 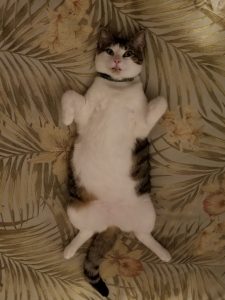 Freyja G was only six weeks old and 2.6 pounds when she was brought to the SPCA. She was semi-feral and extremely shy. Where Freyja G was in that sweet socialization window, she joined the foster program to build up her confidence.

After a few weeks, Freyja G was ready for adoption. Although she made strides in foster care, she needed a special family who would be patient with her. Thankfully, she met her perfect match. 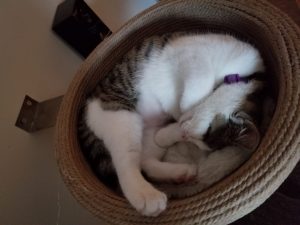 “We lost both our pets under unfortunate circumstances in 2019, including one to kidney disease right before Christmas,” shared Ellen. “My husband and I knew immediately when we saw Freyja G that she was the one.”

Because everything was brand new, Freyja G took some time to settle in. “She was unfamiliar with what a house was,” Ellen remembered. “In fact, she created a burrow out of a couple blankets on the loveseat, and we let her keep that setup. I listened to her. It only took a couple days to establish trust, and we were good from there.” 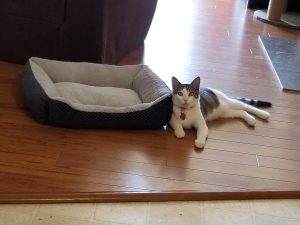 “What really worked for her was the fact that we had lost a cat the day before she joined us,” added Ellen. “She basically sniffed every place that cat had been. He ‘taught’ her all the good places to hang out. She slept in his bed and refused the new one I bought her. In fact, the G in Freyja G’s name is for Gabriel, our previous cat.”

Ellen began working from home and Freyja G became her shadow. When Ellen shifted office space from the kitchen table to the second bedroom, Freyja G switched spots as well. 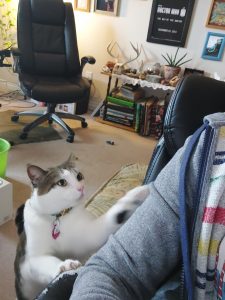 “We moved into the second bedroom where we had a dog bed,” Ellen smiled. “She sleeps on that most of the day. She is very good about reminding me to take breaks with a pat on the arm or talking.” 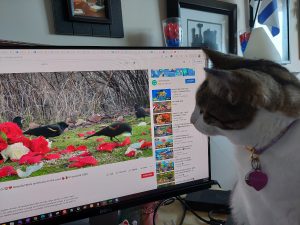 “I’ve learned to follow her and she will show me what she wants,” Ellen continued. “A walk in the hall. A game of fetch. Food. A break to watch bird videos on YouTube. She will tell me. Often at the end of a workday where I may not have given her enough attention because I’ve been in meetings, I will look behind to see all the toys that have gathered there. She’s tried to remind me of breaks and I’ve failed to take them because my ‘schedule’ was not to her liking.” 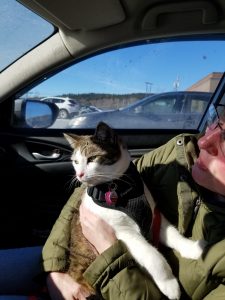 Yep – you read that right. Fetch. “She plays fetch like a dog,” laughed Ellen. “She started bringing me toys and I was throwing them. I don’t know how long this went on before I realized I was throwing toys to a cat. She fetches and brings them back. But she has favourites, and she will tell you what toy she wants to play with.”

And that’s not all… Freyja G also walks on a leash and harness. “She wears it to go outside even to snooze in the sun,” Ellen explained. “She prefers the harness to a cat carrier, so that’s how she travels in the car to the vet. She heels when we take walks in the apartment hall. She comes when she’s called. She responded to her name within days of us getting her.” 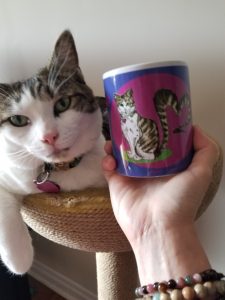 Freyja G’s uniqueness expands even further. “She has an exceptionally long tail – more than 13” – and a heart birth mark on a paw,” Ellen described. “She went from a tiny kitten to a 15+ lb cat. She is truly a blessing. Freyja G has brought a lot of happiness into a period in our lives that was anything but.”

Freyja G taught Ellen and her husband how to love again after experiencing loss.

Ellen is an author so she was inspired to share Freyja G’s tale. “I’ve written a story about her that I plan to publish,” Ellen revealed. “It’s a children’s story to explain what it means to say goodbye to one pet and hello to another.”

Freyja G has lots of dog-like characteristics, but no matter the breed, all pets teach us about unconditional love. As Ellen would put it, “They know how to ‘talk’ if you’re willing to pay attention.”