For most of us, spring brings a sense of renewal and new beginnings.  It’s a time to look ahead with optimism and a new sense of possibility.  It’s also a perfect time to tell the story of one of the Nova Scotia SPCA’s adorable alumni named Cherry. 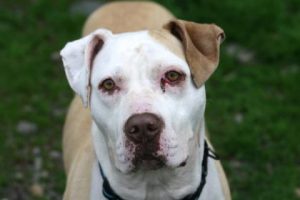 Cherry’s story started May 2019 when she was brought to safety at the SPCA. Her life to this point had definitely been hard. She had been kept tied up on a short chain, was extremely hungry and under-socialized when she arrived at the shelter.

A beautiful blonde Amstaff Terrier, Cherry was approximately five years old. Receiving needed medical care was the first step towards a bright and promising future for Cherry. But she was still very timid and shy and needed some major socialization. Shelter staff and volunteers showered Cherry with love and attention to build her trust and confidence. By the end of June, she was ready to find that special family meant just for her. 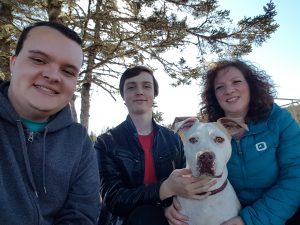 As it turns out, Cherry didn’t have to wait long. On June 29th, Tracey Hilchie’s son Nick was on the SPCA website. Tracey explains “Our beloved Rottweiler Abbey died in December 2018 and we were ready to give a loving home to another deserving dog. Nick had been keeping an eye on the SPCA website for a few weeks when he spotted Cherry. We were drawn to her incredibly cute face. When we did our meet-and-greet, she was very energetic and bouncing around with excitement at the thought of a new home. She kept going to the door and looking outside, as much as to say ‘let’s go!’ We knew then that she was ours.”

Just as actual cherry blossoms need the warmth of the sun to grow and thrive, so Cherry needed the warmth of a loving family for her personality to blossom. Tracey says “Cherry adapted immediately to her new home. She actually slept in bed with Nick on her first night here and she has already called dibs on the cozy spot in front of the woodstove.” 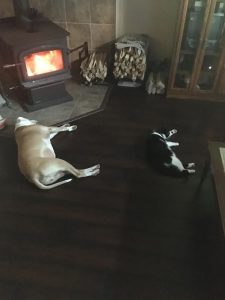 “Cherry loves the attention she gets from our two sons. We adopted our cat Marcy last September and Cherry doesn’t mind her, even though Marcy likes to show her who’s the boss in the house!” chuckles Tracey.

Cherry now has the life she deserves – she realizes that she is home, safe and loved. “She enjoys lying in the sun, going for walks on the beach and exploring every inch of our large rural property,” says Tracey.  “Cherry loves being the centre of attention, and if she feels she hasn’t gotten enough, she lets us know!”

And prepare for cuteness as Tracey relates a couple of Cherry’s eccentricities. “Every night, Cherry fluffs up her bed, makes a pillow for her head and wiggles around on her back in bed until it feels just right.  When she’s ready to come in from outside, Cherry jumps up at the door and sometimes rings the doorbell.   Then, she starts barking because the doorbell rang!”

“This sweet girl has brought companionship and happiness to all our lives,” shares Tracey. “Along with lots of laughter.”  Tracey’s final thoughts?  “The SPCA played a very important role in giving Cherry a second chance at happiness and in finding a family to love her. Her future is bright, promising and filled with love.”

You can give the gift of new beginnings to homeless animals like Cherry.  Please donate today.