New smells. New people. New environments. All these things could be exciting for curious and outgoing kitties. However, for a shy cat, even positive changes can seem scary.

Four-year-old Meredith was one of those shy and sensitive kitties. 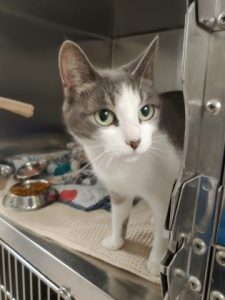 Often hiding in her litter box, SPCA staff and volunteers put in extra effort to help Meredith come out of her shell. She began to make positive progress but would retreat as soon as she spotted strangers. Meredith did not warmly welcome visitors.

For 37 days Meredith watched as other pets came to the SPCA and left adopted. But because Meredith was so quiet and introverted, other cats would steal the show. We hoped for a family to see Meredith’s full potential.

And then along came Meredith’s purrrrfect match: Shannon. 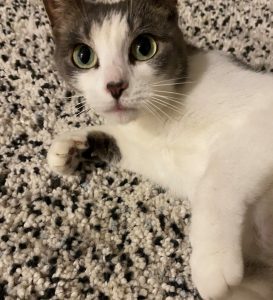 “I first saw her on the SPCA webpage and there was just something about her big green eyes that drew me to her,” recalled Shannon. “She was certainly not the friendliest when I went to visit her, and I could tell that she was not feeling her best. I remember speaking with the kind, compassionate, and informative staff about what type of home would be a good fit for Meredith, and how patience would be very important.”

As a clinical psychologist working with people who have experienced trauma, Shannon knew first-hand that we need to feel truly safe to be our best selves. “I knew Meredith came from less-than-ideal circumstances, and sharing her space with other cats at the SPCA just wasn’t her idea of a good time,” said Shannon. “From my work with PTSD, I know that people can often take time to warm up and show their true selves, and sometimes they just need the right person to give them a chance. I found myself thinking that this little feline was probably no different. Sure, she wasn’t overly kind and cuddly in a cage – but she just needed a safe space and connection in order to be herself.” 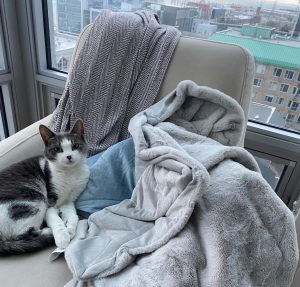 Shannon adopted Meredith knowing she would lean into her knowledge of classical conditioning and positive reinforcement for success. Expecting the nervous kitty to bolt under the couch when they got home, Meredith surprised Shannon when she ended up doing the exact opposite.

“Meredith immediately started purring,” Shannon exclaimed. “She was giving me gentle headbutts, rubbing up against my legs, and looking up at me with the sweetest eyes. I could not believe how sweet she was being – and she’s been cuddly, friendly, and curious ever since. I found myself thinking that Meredith must have known that I was taking her to a safe place – a home where she could spend her days lounging in the sun, staring out at the ocean from the living room windows, playing with her toys, and enjoying lots of treats.” 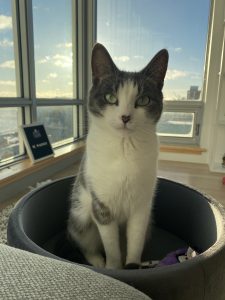 “Even though we don’t speak the same dialect, I think all creatures can understand the language of safety,” continued Shannon. “Especially in these COVID times, we are all a little traumatized and afraid, so it’s a good reminder to extend compassion to ourselves and others during this time! We all need to feel safe and loved in order to let our true selves show.”

And pets can help with this! “There have been a number of studies that have shown animal connections are good for people,” explained Shannon. “I know first-hand that nothing is more comforting than coming home to Meredith meowing at me after work, or snuggling together in the evening with a good book or TV show. Animals also can give us such a great sense of purpose, and there is so much that is rewarding about spending time with them.”

Love, patience and trust are three keys pieces of building a strong bond. Because of Shannon’s kindness, Meredith was able to put her past behind her and have a fresh start. Meredith is thriving now. She has had the opportunity to meet a handful of visitors (within Shannon’s bubble) and greets them with the same affection and attention she gives Shannon.

To thank Shannon for taking a chance on a shy kitty, Meredith wakes Shannon up with face licks and comforts her through difficult times. Shannon wasn’t able to go home to visit her family for the holiday season so Meredith stepped up and was a happy participant on ZOOM calls. In fact, Meredith is a pro with video chats now and loves to support her fur-mama when Shannon does her virtual therapy sessions. “But don’t worry…” giggled Shannon. “She keeps confidentiality.”

Feeling inspired? You can make more happily-ever-afters like this happen by adopting or donating today.