The Nova Scotia SPCA is dedicated to rewriting the story of homeless animals’ lives.  They work tirelessly to ensure that each animal’s story has a happy ending.  Sometimes, they can give a homeless animal a new beginning to their story too. So it was for sweet Bindi. 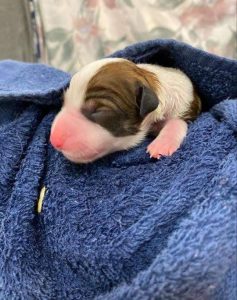 On December 10th, 2019, SPCA Enforcement Officers rescued 35 dogs.  Not long after being in the SPCA’s care, 3 pregnant moms gave birth to 18 puppies, bringing the total to 53 puppies and dogs! This was one of the largest dog seizures in Nova Scotia – ever.  Bindi was one of the babies born in the safety of the SPCA.

Bindi and her siblings, her mom and all the other rescued dogs were housed in emergency infrastructure where they were safe and warm.  They received needed medical treatment, food for hungry bellies and patient loving care.  A long road to recovery lay ahead.  But now there was hope.  Now they could heal.  Generous animal-lovers like you helped to change their story from one of heartache to hope. 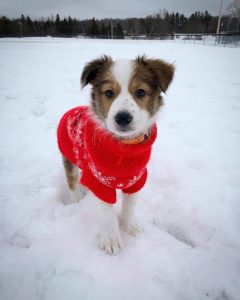 Shortly after birth, the 3 litters went into foster homes where they stayed for the first few weeks of their lives.  Then, while the adult dogs were in training and foster homes, the puppies joined the SPCA WOOF Program.  WOOF, which stands for Working On Our Future, pairs puppies with screened inmates.  Under the direction of an expert SPCA trainer, the puppies learn skills, gain confidence and are well socialized.  The inmates learn responsibility, patience and respect – skills that can help change the direction of their lives too. 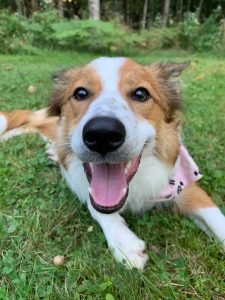 The pups stayed in the program until they were ready for adoption.  All were ready except sweet Bindi.  She was the smallest pup among the entire bunch.  She had developed chronic skin issues that required baths in medicated shampoo twice a week and additional nutritional supplements. So when Bindi was 8 weeks old, she was put into the trusted foster care of Amy, a staff member at the Colchester SPCA, until her skin issues were deemed to be resolved.

“We fell in love with Bindi at first sight”, says Amy of herself and husband Sam.  “She has the sweetest little ‘freckles’ on her nose that are adorable.”  Amy recalls Bindi’s first night in their home.  “She cried a lot, missing her littermates.  All she wanted was to be cuddled, and she slept on my shoulder all night.  After a few days, she settled right in and we got to see her sweet loving nature.” 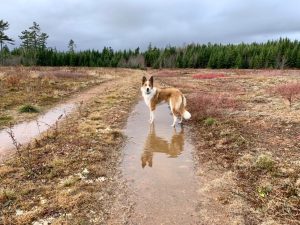 Bindi’s new beginning included acquiring a talented big brother, a border collie named Blue that the couple had adopted previously.  “We think having Blue around really helped Bindi adapt to her new surroundings.  She followed him everywhere,” relates Sam.  “Interestingly, Blue is almost completely deaf.  It doesn’t slow him down though – he loves going to obedience classes and is even trained in scent detection,” Sam adds. 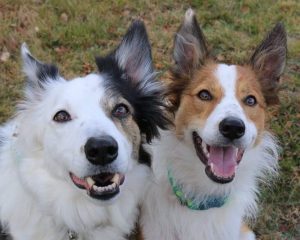 It didn’t take long for Bindi to melt the couple’s hearts and they adopted her at 6 months old once she was medically cleared.  “She’s a bundle of pure joy; she’s always happy and brightens your day.  We can’t imagine life without her now,” they share.  “It’s also been very helpful for Blue to have Bindi as a sister and playmate.  Because he can’t hear, we see him observing her and he’s now able to know when someone’s at the door.”  Sam adds “Bindi is absolutely obsessed with her brother.  If they’ve been apart, she immediately runs over and gives him kisses.  They love to play outside together and she is always pressed up against him when they nap.”

Bindi has truly blossomed.  “She enjoys swimming, playing ball and jumping in the snow,” says Amy.  “She’s a quick-study too and has already completed one obedience class as well as a beginner agility class.  She gets such a big smile on her face when she’s running through tunnels and over jumps.  We’re so proud of her.”

The couple’s final thoughts?  “Bindi got a new beginning thanks to the SPCA.  We are excited to help write the rest of her life story.” 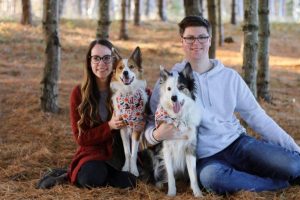 A special thank you to everyone who donated, fostered, adopted, fundraised and raised awareness. Because of you, 53 puppies and dogs got a second chance for a safe, happy and healthy life. Please give other homeless animals like Bindi a chance to live the life they deserve. Be a hero and donate today to help the next pet in need.

“We brought Bindi home in February and it was freezing cold! We quickly determined that she hated the cold and refused to go outside without a sweater on.  She enjoys the snow much more now that she is older.  In fact, now she never wants to come back inside!”

“We jokingly call Bindi a mermaid. She is absolutely crazy about water! I think that might come from having to have baths twice a week in medicated shampoo for her skin… in the beginning she would get treats in the tub, so she learned that baths are a good thing. Now she’ll jump right into the bathtub or shower with you and if you’re not paying attention a ball might get dropped in with you as well! You can’t turn on the tub and walk away while it fills because she will just jump right in and have her own bath! In the summer, she had her own sprinkler that she would play in for hours and we would take her to the lake for swims- it was difficult to get her to leave. She knows where the tap is for the sprinkler and will jump at it and try to turn it on herself!”