In 2014, the Nova Scotia SPCA spent four hours rescuing 127 cats from a hoarding situation. It was one of the largest seizures in years. Link, an adorable orange and white tabby, was one of those kitties. 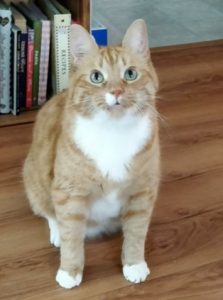 Often, cats from hoarding situations have spent more time with other cats than with people. Because of this, they can be fearful and may not know how to live in a home. Things that may seem like normal behaviours, like using a litter box, are brand new. They may even be scared of everyday things like dishwashers and television noise.

With Link, he was scared of humans and would only come to you on his own terms – usually when there was food and treats involved. SPCA staff and volunteers worked to build up Link’s trust and teach him that people are kind and loving. Once Link was medically cleared, it was his turn to leave his shelter life behind and find his forever family.

And then fate stepped in. 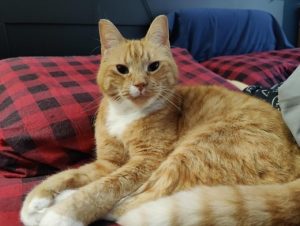 Ryan had just purchased a new fish tank and made a trip to a pet store to get some fish. On the way to the back of the store, he saw a multi-level kennel with a single cat for adoption. They locked eyes. 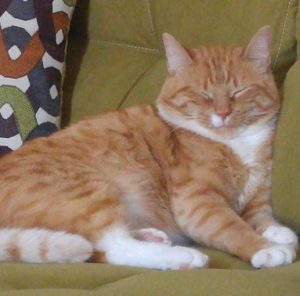 “I saw this underweight, partly shaved cat with giant fluffy cheeks, spent about 5 minutes with him and instantly fell in love,” remembered Ryan. “I most certainly did not expect to adopt a cat that day but here we are, 6 and a half years later and I could not picture my life without Link. I constantly feel like I won the cat lottery.”

After a few days of hiding and sneakily exploring, Link began to warm up and parade around the house. “After he realized that he was in a forever home he became a playful, affectionate cuddle bug,” Ryan laughed. “He is known for his running headbutts. If he sees someone new he will wait for them to get settled and then vigorously headbutt them until he gets ear scratches.” 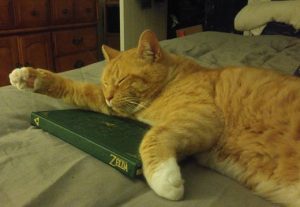 Everyday household items still fascinate Link. “Link loves to play with pens, coins, and coasters,” shared Ryan. “I don’t think Link had toys for the first few years of his life. One of my earliest memories of him was when I dropped a mechanical pencil in the first month I had him. He instantly tackled it and spent a good hour chasing and batting it around.” 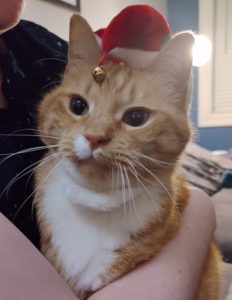 Ryan and Link love spending the holidays together. “Our pets get just as much out of the holidays as we do and I believe the upbeat attitude of the season has a huge impact on them,” exclaimed Ryan. “Even if it’s extra treats under the tree, the more time at home, or extra affection you can see the positive change in them… even if that positive change involves being extra playful and trying to knock down the bulbs on the tree.”

I think cat owners everywhere are giggling and can relate to that.

“There are always animals in need though,” Ryan continued. “If you cannot bring a new furry family member into your home, consider donating what you can to help out the shelters. You might not think a few dollars donation could help but maybe that donation means they get that extra bit of affection, that new blanket or new bag of treats they would not have had otherwise.”

“Monetary donations are a great way to support a cause like the SPCA, especially at this time of year,” Ryan smiled. “Without them there are so many of us who wouldn’t have our little best friends.”

Feeling inspired? You can make more happily-ever-afters like this by donating to the Nova Scotia SPCA. Click here.