From the moment Laurel came into the world, Orlean knew her daughter was special.  At just 2lbs 11oz, Laurel had beaten all odds when she was born. Even though her body was tiny, everything else about Laurel was mighty — her smile, her spirit, and especially her heart. 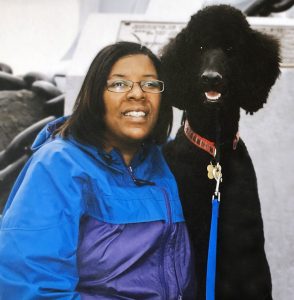 After spending childhood in and out of the hospital, Laurel was inspired by the many nurses she met. It became her mission to show others the same kindness that she had been given. So after high school, Laurel pursued a degree at Saint Martha’s School of Nursing. Over the next 28 years, Laurel worked as an RN in hospitals throughout Canada and the USA. She spread comfort to thousands of people along the way.

It was Laurel’s caring nature that led her to Zeus. Zeus had been waiting for the perfect owner with the patience and understanding to handle his chronic digestive disorder. Laurel was certain fate brought them together to give Zeus the best life possible. But when she fell sick shortly after adopting him, Laurel realized that Zeus was just as much of a blessing to her.

As Laurel sought treatment for stage 4 Mesothelioma, Zeus never left her side.  Remembering back, Orlean said her daughter was happiest with him around. “She pushed herself to walk with him every day,” said Orlean, “and when she slowed down, he just seemed to understand. She fought hard because of him.”

October marks one year since Laurel lost her heroic battle with cancer. In loving memory of her daughter, Orlean has made a generous donation to the Nova Scotia SPCA so that more families could have the same happiness that Zeus and Laurel shared.

The Nova Scotia SPCA cherishes every gift made in memory of a loved one. It is an honour to be able to continue the legacy of animal lovers like Laurel.

Pets give you unconditional love… and you have the powerful opportunity to make your love unconditional too.  By leaving a meaningful gift for the Nova Scotia SPCA in your will, you continue to transform the lives of local animals. Learn more here.

Christa is the Director of Development for the Nova Scotia SPCA. As an animal lover, she is very passionate about animal welfare and working with philanthropists to give pets the happiness they deserve. Christa and husband Matthew, are proud parents of two children – one with paws and one without.