“Missing pet” is something we all fear to hear. Unfortunately, in North America, a pet is lost every 7 seconds. Cats and dogs are naturally curious animals and the unthinkable can happen in the blink of an eye.

This is exactly what happened to Sonja and Ethan and their beloved Iti.

The pair first met Iti on one of their many travels to Africa. “My partner Ethan is a marathon runner, that is his passion and he’s very good at it,” said Sonja. Part of Ethan’s training involves regular travel to Iten, Kenya for high altitude training. 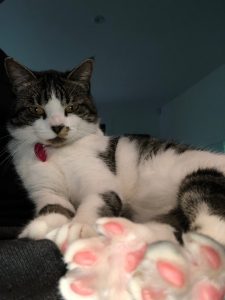 While Ethan is busy training, Sonja, an experienced veterinarian uses her talent and passion to help animals in the area. “Like most veterinarians, I am pretty much a softy when it comes to animals – all animals,” Sonja explained. “My travels to Africa have made me very aware with the perils that the wildlife there are facing. I have become quite impassionated with the plight of the Rhinoceros. These animals are amazing – my experience with them has led me to appreciate their gentleness, their curiosity, their strength and their incredibly fastidiousness.”

In December 2018, Sonja spotted 3 stray cats at the training camp. One of the three was smaller and much thinner… but also seemed the bravest. “She looked like a kitten but I suspected she was probably older than she looked,” exclaimed Sonja. “Soon she came to trust me and would seek me out at mealtime. She then figured out which room we were staying in and would sit at the front door waiting for us. Our fates were locked.” 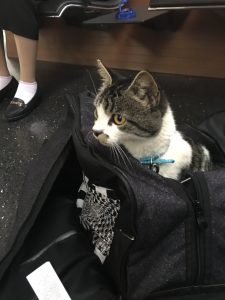 Sonja and Ethan reached out to a local tailor to create a makeshift cat carrier to protect Iti on the plane. During the long night flight, Ethan and Sonja were woken up by one of the flight attendants. Iti had worked away at the zipper and escaped! “I jumped out of my seat and followed the flight attendant to the food station in the back where I found the other flight attendant cuddling Iti and Iti quite contently purring in her arms,” laughed Sonja. “Iti had definitely made some friends on that flight.”

Once settled back home in Nova Scotia, Iti started into a routine of sleeping, cuddling and chatting with her fur parents. “Ethan calls Iti his Kenyan alarm clock because she gets him up every morning around 4am,” said Sonja. Iti was always ready for a snuggle… so when Iti didn’t curl up on the couch with Sonja and Ethan one evening, they knew something was wrong. 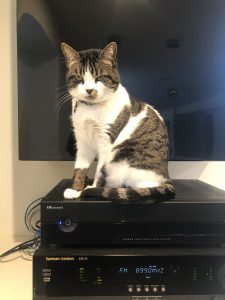 Right away, Sonja and Ethan began going door-to-door asking neighbours if they had spotted Iti. They created posters and posted them throughout the neighbourhood and local businesses. “We had all sorts of people looking… We definitely made some friends,” explained Sonja. “I contacted the local vet clinics, the cat shelters, and the SPCA. I went out several times a day and night calling out for her.” Sonja and Ethan even offered a reward of $1,000 to hopefully bring Iti home safely.

Thankful that their kitty was home, Sonja and Ethan wanted to pay-it-forward to help other animals in need. They generously donated the $1,000 reward to the Nova Scotia SPCA! “The SPCA is so important in our community,” exclaimed Sonja. “If I ever found a lost animal the SPCA would be the place I would take them to with the hope that they could be reunited with their family. It’s the go-to place in our mind and must be supported.” 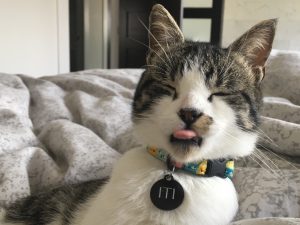 “I suspect that many people have really learned the value of animal companionship during COVID-19,” Sonja reflected. “They provide unconditional love and huge amounts of joy and fun. Because of this they need to be valued and helped – they are not a thing, they are living creatures, they should never be discarded or abused but sometimes a situation arises where that happens – this is when they need our help. It is our responsibility as a society to respect and help these animals.”

“I never want anyone to lose a pet but if it goes happen, know that there is a whole network of people out there that want to help and provide support,” explained Sonja. “When an animal goes missing don’t give up – be tenacious and just keep looking.”

Thanks to Sonja and Ethan, Iti was given a second chance at a healthy and happy life. And thanks to the support the community and animal-lovers, Iti was found and brought home safe and sound.

Feeling inspired? You can be a hero for homeless pets by donating to the Nova Scotia SPCA. Click here.