Seven was surrendered to the SPCA because her previous owner believed she was “untrainable.” But Seven wasn’t untrainable… she was deaf. 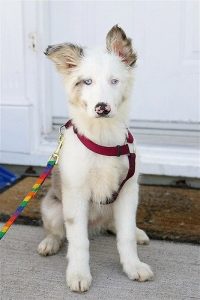 A suspected border collie, Seven’s piercing blue eyes and smile stole Amy’s heart. Amy, who is the expert dog trainer for our WOOF program, was volunteering at the SPCA at the time. Amy adopted Seven and was determined to show the world that with patience and proper training there are no limits to what deaf dogs can accomplish.

Signals instead of Sounds

“The biggest thing we like to focus on with deaf dogs is making it highly rewarding for them to make eye contact and check-in frequently with their family members. Time, patience, and lots of food rewards… even for the little things.”

The biggest challenge? Amy explains it is difficult getting a deaf dog’s attention when they’re not looking at you. To help with this, Amy recommends focusing on highly rewarding the deaf dog every time they make eye contact – especially when faced with distractions. Startling a deaf dog can also be a concern but many will become vibration sensitive to footsteps and motion.

At only four-months-old, Seven began volunteering and providing comfort and care. Seven visited with hearing-impaired children and children that were separated from their families and experiencing mental health or behaviour concerns. “Seven LOVED children and of course the kids loved her just as much and were delighted in helping train her,” says Amy. 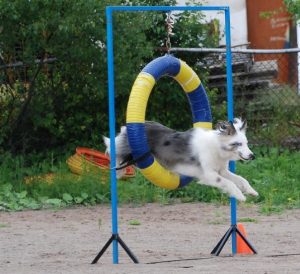 And that’s not all! When seven was seven-years-old, she started WOOF at the correctional facility. WOOF, which stands for Working On Our Futures, is a joint initiative between the SPCA and the Department of Justice. Through the program, Amy and Seven would help teach inmates how to train puppies so they are adoption-ready. Not only did Seven provide a great example to the puppies, but she provided comfort and affection to hundreds of inmates and staff.

Deaf dogs, just like hearing dogs, require time, patience, and energy devoted to training and socialization. As with any dog, it is important to develop a trusting relationship and build the dog’s confidence through positive interactions.

Being a rescue pup AND being deaf, some folks were skeptical about Seven competing in agility. But Amy believes that any dog can be trained to do anything they are physically capable of at any age. “We recommend using higher-value food rewards when heading outside or to more distracting environments,” explains Amy. “We also use a lot of play and permission to access things in the environment the dog is interested in.” Well, all that training and patience proved successful – Seven competed and received the Agility Trial Champion of Canada title!

From competing in agility trial championships to providing comfort to hearing-impaired children, Seven showed the world deaf dogs can do whatever hearing dogs can. Seven received a second chance and lived a safe, happy, and full life. Sadly, Seven has made her way to Rainbow Bridge but she leaves behind a legacy of love.

“Seven was a ‘smiler’ and had the most hilarious grins, which was one of her most endearing traits,” remembers Amy. “Once I explained this was a sign of how much she loved people, it was often a contest to see who could get the biggest smile out of Seven.” Seven, we know with your big heart and kind soul that helping spread awareness would have made you happy. We hope you’re smiling up there.