The SPCA makes a life-changing difference for thousands of homeless animals every year, healing hurts and hearts to give them a second chance at happiness. Foxy is one of those animals. This is her story. 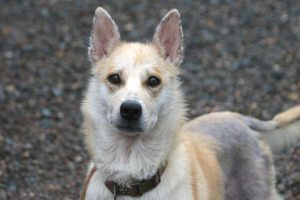 In September 2021, SPCA Enforcement Officers brought Foxy to safety at the Dartmouth SPCA.  Approximately six years old, Foxy arrived in terrible condition. Her fur coat was very thin with some large bald patches and her skin was thickened and greasy. She was suffering from a severe flea infestation, dermatitis and required dental work. She began a course of antibiotics and pain medication. Then Foxy was placed in the SPCA’s Foster-to-Adopt Program which would let her recover in a home environment while she underwent treatment. 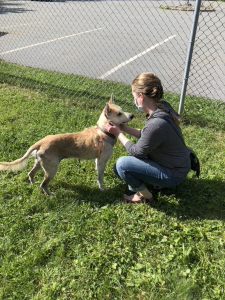 Corrie and Zack had been checking the SPCA website for a few months, waiting for the right dog to come along that would be a good fit with their family. When Foxy’s profile popped up, Zack contacted the SPCA immediately to see if she would be a good match. The couple was drawn to Foxy from the get-go. Corrie shared “Even though poor Foxy looked a little rough, she was very friendly and had a curious expression that melted our hearts. She also looked similar to our last rescue pup, Daisy, who we had for 14 wonderful years, so that seemed like a good sign.”

Corrie explained, “The great thing about the Foster-to-Adopt Program is that it allowed us to take Foxy home while ensuring that the SPCA would oversee her health care. It provided a good “test-run” to make sure our home would be a good fit for Foxy and that we would be able to handle her needs if she did have ongoing medical issues. The SPCA was very clear about the medical needs Foxy had at the time, as well as the fact that she may need to take some medications long-term, so we knew what her care might entail and felt confident that we would be well-suited to handle it.” 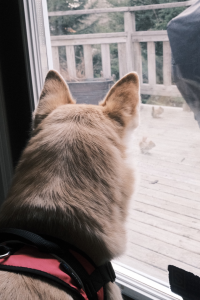 It didn’t take Foxy long to adapt to her new home. Zack chuckled “Foxy walked in and immediately made herself at home. We don’t mind if our pets sleep on the furniture, and that’s definitely a good thing as she hopped up on every soft surface in our house within five minutes of coming through the door! You could tell right from the beginning that she knew this was her new home and that she was happy to be here.”

“Foxy is the only child (dog or otherwise!) in our home, so she gets all the attention,” said Corrie. “She is very friendly and gentle with children she meets and is a very exuberant greeter of other dogs. We are working on practicing calm greetings as her enthusiasm can be a bit intimidating to other dogs. The SPCA let us know before we brought her home that she wouldn’t be suited for a home with cats or small dogs, so we also knew to be aware of her behaviour around small animals.” 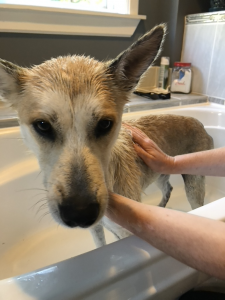 “Foxy received excellent care at the shelter,” Zack explained “They helped her when she needed it most and made sure they gave her the best chance at success. We felt free to contact them with any questions or concerns that arose and are grateful for their continued support. We brought her in for several check-ups during the foster-to-adopt period. Every time we visited the SPCA, Foxy was excited to see her old friends – staff and volunteers. Everyone we spoke with was warm and compassionate. I don’t know what would have happened to Foxy without the SPCA, but I do know her transformation started as soon as she crossed their doorstep.”

Slowly but surely, Foxy’s health improved. Over time, her skin healed, the lesions disappeared, and she wasn’t itchy anymore. She filled out, gaining weight and regrowing her thick beautiful coat. Corrie said “She is much happier now that she no longer needs to take frequent baths with medicated shampoo!  Emotionally, she has grown to trust us much more and looks to us for guidance when something scary happens like a loud motorbike or truck going past when we’re out walking.”

Foxy’s ‘before’ and ‘after’ photos show a big difference. And as much as a picture can show a transformation, Foxy’s transformation is much more than skin deep. You can feel a sense of peace and happiness in her ‘after’ photo that was missing before. Foxy realizes she is home, safe, and loved. 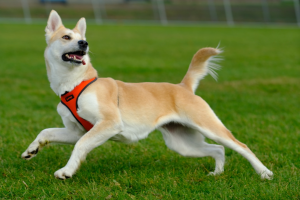 Foxy is definitely living her best life. “She loves going for walks and enjoys all the smells. If another dog has walked down our street in the past half hour or so, Foxy’s nose will be glued to the ground for her entire walk!” laughed Zack. “She also enjoys a good game of fetch and will keep running as long as you keep throwing. She loves saying hello to all our neighbours while we’re out walking (especially those that she knows will have a few doggie treats!) and snoozing in the sun on our front porch while keeping an eye on the squirrels.” 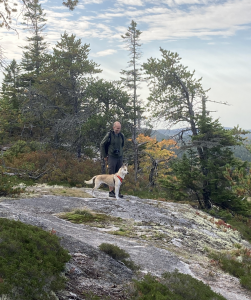 On November 20th, the couple finalized Foxy’s adoption. They shared “Foxy has enriched our life in many ways. She really enjoys life and is making the most out of her second chance, so she reminds us to be in the moment and stay optimistic. Some of our happiest times with Foxy would simply be the end of the day, when she is curled up on the couch between us, with her head in one of our laps and a little smile on her face.”

And the couple’s advice to people about adopting an animal who’s had a rough start in life? “They seem to understand that you’re giving them a second, better life filled with safety, security and love and are grateful to get that chance. They embrace their new life wholeheartedly and the unconditional love you will receive is unmatched.”

Please give other homeless animals like Foxy a chance to live the life they deserve.  Donate today.

Dedicated, compassionate and influential. Those are the words that come to mind when I think of this... READ MORE about Powerhouse Committee Raising Funds in Cape Breton