Some of the smallest people have the biggest hearts when it comes to homeless animals. Take Jersey Matheson for example. Jersey is only 7 years old, but in her short life she has shown more kindness, selflessness and generosity than many of us can claim for a lifetime. We wanted to celebrate this pint-sized super-hero’s recent hard work that has made a big difference in the lives of Nova Scotia SPCA animals. 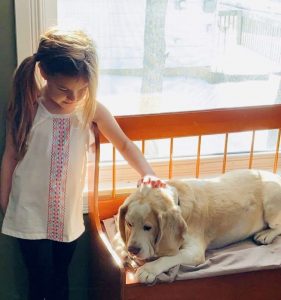 Jersey’s proud mom Danielle said “Jersey’s love for animals was apparent from a very early age. When she began crawling, she would wriggle her way over to our dog Harley and sleep with him in his bed. Harley is still Jersey’s best buddy and loyal sidekick.”  Danielle continued “Jersey has a big heart and always wants to make people smile. This spring, she decided that she wanted to raise funds in memory of Leigh-Anne Cox as part of Leigh-Anne’s Legacy.  She brain-stormed different ideas and said she was determined to run a lemonade stand this summer.” 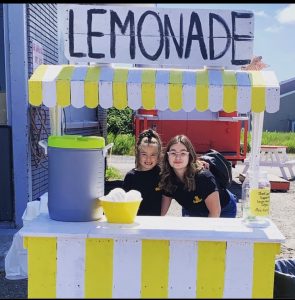 Jersey asked her parents about the things that Leigh-Anne loved. “We told her that Leigh-Anne was a dedicated volunteer at the Cape Breton SPCA, where she showed unconditional love and kindness to animals,” relates Danielle.  “And that’s where Jersey decided that the money she raised would go.” 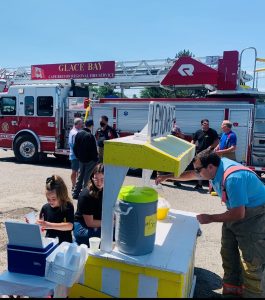 As fate would have it, someone was selling a lemonade stand on Facebook. Incredibly, Jersey went and bought it with her own birthday money. What an amazing young lady! People heard about her initiative and donated cups, lids, ice and lemonade to help her out. Support from the community was amazing and when the heatwave struck in late July, Jersey was ready to go! 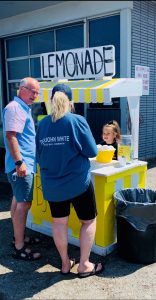 On July 25, big sister Taylor helped Jersey set up and operate the lemonade stand. Tons of people stopped by to offer praise and encouragement and to make a donation. It warmed Jersey’s heart that Leigh-Anne’s mom and friends were also there with support and gratitude. In August, Jersey stopped by the Cape Breton SPCA and made Thankful Thursday extra special when she proudly presented a $2,000 cheque for her furry friends! 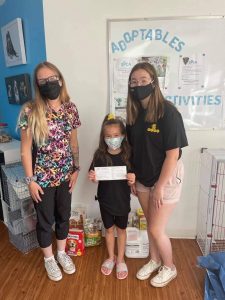 While this was the first time Jersey raised money for the SPCA, she’s a fundraising pro, and was previously involved with Jayitforward and the Christmas Crew. Her thoughtfulness extends to everyday things as well, for example, bringing extra gloves for her classroom on a cold day in case anyone forgot theirs. She’s looking forward to the time when she can volunteer at the SPCA shelter.

Teaching kids to be kind to animals is one of the most important life-lessons parents can pass along to them. Danielle emphasized “As parents, we need to teach kids at a young age to be kind in every way they can, both to animals and to people. We also need to encourage and support them in their efforts – whether it be doing a little fundraiser, donating things or giving their time.”

And Jersey’s final thoughts????? “Doing things that make other people happy makes me happy. It can make you happy too.”

Let’s give a huge round of ‘a-paws’ to kids like Jersey who are doing amazing things to help homeless animals.  Let’s encourage other kids to become heroes for homeless animals too.

We hope that Jersey’s story inspired you. There are lots of great ways for kids to help homeless animals. Here are some favourites.

Ask for birthday donations. Kids can ask family and friends to bring donations for homeless animals instead of birthday presents.

Organize a fun fundraiser. Kids can host fund-raisers like lemonade stands, bake sales and car washes in their neighborhood or at church or school to raise money for homeless animals.  They can also collect recyclable cans, take them to the local recycling center and donate the proceeds to a shelter or rescue.

Conduct a ‘Wish List’ drive. Kids can ask their teachers if they can lead a donation drive at their school to collect items that shelter animals need, like food, toys, beds, towels and blankets.  Or they can get creative by hosting a movie night or ice cream party for friends, with a Wish List item as admission.  The SPCA’s Wish List for animals can be found here.

Have a friendly competition at school. Kids can hold a pop can or coin drive with a catchy name such as ‘Pop Cans for Pets’, ‘Cans for Cats’ or ‘Dimes for Dogs’ and make it a competition between classes, grades or the entire school.  Winners can receive awards such as ‘Top Crusaders for Cats’ or ‘Dogs’ Best Friends.’

Educate friends and family. Kids can play an important role in helping people understand that spaying/neutering their pets can help reduce the number of homeless animals. They can make bookmarks, posters or write a report for class about the importance of spaying/neutering your pet.

Adopt pets from the SPCA or a registered rescue. Kids can lead by example by adopting a homeless pet from a recognized rescue.

Foster an animal. Kids can ask their parents to help them foster a homeless animal. They’ll be helping two animals – the one they foster and another one who will get a place in the shelter.

Lead by example. Along with their parents, kids can make sure their family’s pets are spayed/neutered, have up-to-date vaccinations, ID tags and a microchip in case they get lost.