Sometimes, 13 can be a lucky number.  The tiny kitten was the 13th animal that this dedicated foster family took into their hearts and home for the Nova Scotia SPCA.  She’s not only a star in the family’s life now, but a social media celebrity as well.  Here’s her story.

On November 26, 2020, two kittens were brought to the Dartmouth SPCA. They were covered in fleas and had anemia. Shelter staff named them John and Yoko. Sadly, even though he received emergency care, little John didn’t survive. Yoko continued to be monitored and cared for and when her health improved, the call went out for a foster home where she could be socialized before being put up for adoption. 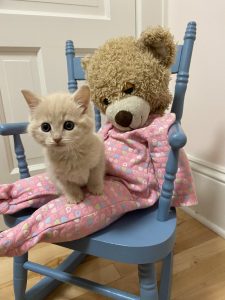 Angela and her family had been selflessly fostering kittens for several years. Because of their dedicated efforts, an amazing 12 foster kittens had already received a head-start in life and a chance for the happiness that they deserve. The family stepped up once again to answer the call about Yoko, who would be their 13th foster fur-baby.

I asked Angela what made her decide to become a foster parent. “Our 3 kids – Aliana, Dorian and Anneka – were interested in getting a pet, but we weren’t sure we were ready for a life-long commitment despite of our love of animals. After seeing photos of foster kittens that some of our friends were caring for, our kids lobbied us to foster. We decided that fostering would be a great way to let them learn about caring for animals, empathy and responsibility.” She continues “The kids are directly involved in fostering – feeding, cleaning litter boxes and especially, socialization. They hold and play with the kittens non-stop.  All the kittens that have left our home are 100% guaranteed to be ready for cuddles by any age child.” 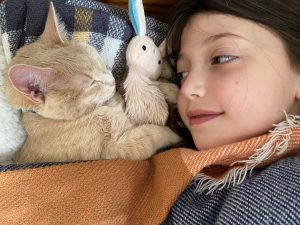 Yoko first joined the Siegels when she was four weeks old. It didn’t take long before this fluffy little cutie made herself right at home. Angela shares “All of the kittens that we fostered were so adorable and lovable (after a bit of socializing at least – a few were a bit hissy when they first arrived!). However, before Yoko, the others all came in batches of 3 or 4. It’s much easier to say no to keeping 4 kittens than it is to keeping one (especially when each child is lobbying to keep a different kitten!). She laughs “Honestly, we didn’t expect to keep any! That being said, I often took adoption papers home as I fell in love with each batch!” 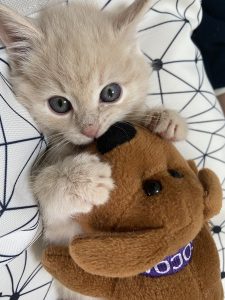 “When we got the call from the SPCA about Yoko and learned that her litter-mate John had passed away, I was concerned that this tiny kitten might not make it,” relates Angela. “However, on the way home she proved to be quite the feisty one! On our daughter’s lap in her cat carrier, she chased shadows back and forth in her little cage. She was hilarious and had loads of personality. She was snuggly and sweet from day one.”

It didn’t take long for Yoko to win everyone’s heart in the family. Angela chuckles “I also don’t think it took too long for me to realize that I’d likely become a ‘Foster Failure.’” Just before Christmas, the Siegels chose to adopt her and aptly named her Noelle. 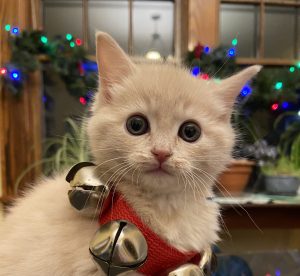 Noelle has definitely brought joy and laughter to the family’s life. “She’s a perfect blend of buff-colored cuteness, but her background isn’t known,” Angela shares “While we’re sure she’s not a whale shark, she does have stripes and spots! She’s super-cuddly AND super-playful. She loves to be wherever her people are and will follow them around throughout the day and sleep with them at night. One of her special tricks? “She can fall asleep within seconds of playing at full speed!” 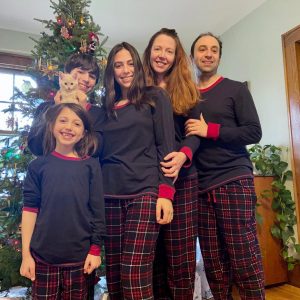 Noelle never ceases to amaze the family. “Cats aren’t known for loving water, but I think Noelle might not know this!” Angela explains. “She takes weekly baths with our youngest daughter and even likes her kitten shampoo and bath time. If anyone is ever in the washroom, she jumps up onto the sink in the hopes that they will turn on the tap. If they do, she will step in and drink straight from the faucet. She has sometimes even slept in the sink while it was dripping slowly onto her. We are slightly concerned that she has learned how to turn on the faucet!”

And Hollywood stars are not the only ones to see their name in lights. Noelle has been featured in Dalhousie University’s Pets of Dalhousie’ publication. With over 100 followers, she’s also featured on an Instagram the Siegels set up to show the antics and adventures that come with fostering kittens.

I asked Angela if she thinks that fame has gone to Noelle’s head. “I’m fairly certain we’re safe there! Noelle is pretty well grounded. She’s also great at inspiring others to learn more about the Nova Scotia SPCA and about fostering. She has been on many outings to our kids’ schools and has had lots of visitors. She’s a very effective SPCA Ambassador!”

Prepare for cuteness. Click here for Noelle’s Instagram account. Check out some of the awesome photos of Noelle and other kittens that the Siegel family has fostered.

To find out more about fostering and how you can help, click here.