It’s been said that homeless animals choose us as adopters, not the other way around. They seem to have an innate sense of the type of family they need; the home that would be the best fit for them.  Somehow, they work their animal magic to let us know we have been chosen. So it was with Tucker. Here’s his tale.

In June 2019, Tucker was surrendered to the Cape Breton SPCA by his owner who couldn’t care for him adequately.  A two-year-old German Shepherd, Tucker was very thin, smelly and had lost much of his hair.  It was obvious that he had not been trained and he was extremely undisciplined.  Staff knew that his behavioral issues would require lots of work.

Over the next 7 weeks, Tucker’s medical conditions were treated and he gained weight, but he was still out of control jumping and playing.  It also became clear that Tucker wasn’t fond of men.  Everyone at the shelter hoped that someone would eventually see Tucker’s full potential.  And then along came Tucker’s perfect papa – Wayne Swift. 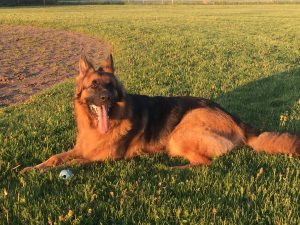 Wayne recalls “I was scrolling through Facebook one evening and in my notifications, there was a link from a friend. It was a link to a dog for adoption at the SPCA.  It was Tucker.  My friend knew that I wanted to adopt a dog, but having recently moved to Nova Scotia, I was waiting to do so until I got settled.  He also knew I had my hopes set on adopting a German Shepherd.”

“I was drawn to Tucker immediately,” says Wayne.  “It was so sad to see him under-weight with his sparse coat.  No dog deserves to be like that.  His eyes told a story and he looked like he just wanted to please.”  Wayne continues “I went to meet Tucker the very next day.  It was an instant bond.  I took him for a walk and as we walked, his excitement and boisterous enthusiasm subsided.  He grew more and more attentive.  By the time we returned to the shelter, it was decided – I was Tucker’s human, I just hadn’t realized it yet.” 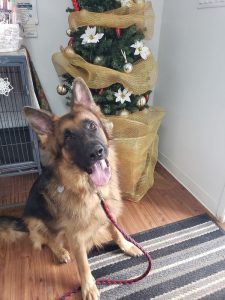 Wayne relates “That evening, Tucker constantly returned to my thoughts. I don’t take the decision to adopt a dog lightly and wondered if I was up to the task of raising a high-energy boy.  So I returned to the shelter the next day to visit Tucker.  By the end of our second walk, Tucker had stopped trying to run far ahead; he was actually looking back at me and following my lead.  We played for quite a while out front until Tucker killed the basketball,” chuckles Wayne.  “Then we laid together on the grass and the two of us figured things out together.  I promised Tucker that day if he chose me, I’d give him a loving home.  After all, how could I say no?”

Knowing that love, patience and trust are key to building a strong bond, Wayne came to the shelter every day to visit while Tucker was finishing a course of his medication.  “Our daily walks were quality bonding time,” explains Wayne.  “As days progressed, Tucker became more trusting, attached and attentive.  The learning process for both of us had begun.  Once his adoption was finalized, I was excited to give him his new collar and name tag.” 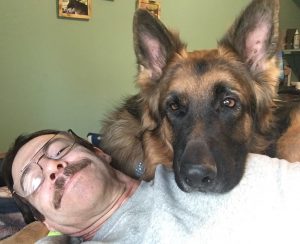 Tucker’s transformation into his new home has been remarkable.  Wayne chuckles “Within weeks, Tucker went from being homeless to becoming my Velcro leg attachment!  No longer could I go pee alone!” Once the bond between the two was solid, it was time to do more training.  “We walked twice daily.  As Tucker’s high energy dropped, he became a sponge for learning, wanted to please and get praise and love in return.  Treats were never high on Tucker’s list; he preferred praise and snuggles as rewards, likely due to his past experience,” relates Wayne.

Tucker is thriving in his new home.  Wayne shares “He loves his walks and playing ball.  Squeaky balls are a favorite; the more they squeak, the happier he is!  Tucker’s affinity for water emerged as soon as he realized he had to dog paddle to keep afloat.  And he loves snow, pretending he is a plow and pushing the snow with his nose.” 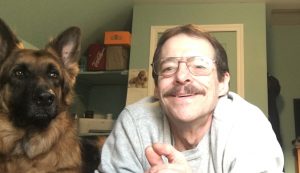 At the end of their first year together, Wayne and Tucker had worked through most of his issues.  Changing Tucker’s over-enthusiastic way of greeting people proved to be a bit more work.  “Consistency has been the key.  Over time, Tucker realized that calm greetings get him the attention he desires,” explains Wayne.  “He still has some separation anxiety but has accepted that he doesn’t need to come with me every time.”

“It’s 18 months later and I still haven’t had cold feet at night,” laughs Wayne.  “And my mornings start with a cold wet nose burrowing in my pillow as soon as I stir. Tucker and I regularly go back to visit all the special friends he made while at the SPCA.  The staff are as happy to see him as he is to see them.”

Wayne’s final thoughts?  “The amazing care and love Tucker received from SPCA veterinarians, staff and volunteers gave him a new lease on life.  I’m so glad there is an organization in our community that helps so many animals in need.  And I’m so grateful that Tucker picked me.”