For homeless animals, there’s a doorway between heartache and happiness.  A key is needed to unlock the door.  The key is hope.  The Nova Scotia SPCA gives hope and unlocks doors to happily-ever-after for thousands of homeless animals that cross its doorstep each year.  Chester is one of those animals.  Here’s his story. 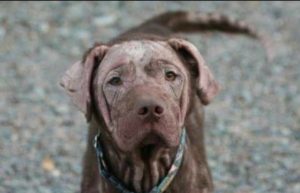 In August last year, SPCA Enforcement Officers brought Chester to safety at the Dartmouth SPCA.  He was suffering from terrible skin and ear infections.  Chester’s ears were so painful that he didn’t let anyone go near them and he had to be sedated in order to treat them.  He also had unknown allergies that led to the loss of much of his fur.

Treatment was complex and involved several different medications. But medical care was just the first critical step in Chester’s healing.  Rescued animals need to heal emotionally too.  Over the next two months, staff and volunteers showered Chester with love and attention and worked hard to build re-build his trust in human beings. 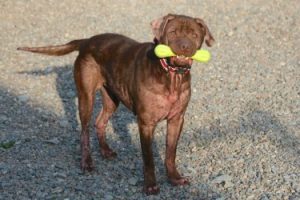 At the beginning of October, the SPCA decided that Chester should be placed in a foster-to-adopt home, so he could settle in with a family while still being treated medically at the SPCA.  That’s when Chester’s life changed.  Thia was on the Jack 92.9 Facebook page and saw a photo of Chester, who had been featured on Wet Nose Wednesday.  Thia shares “I wasn’t looking for a dog per se. In fact, I’ve been a cat person most of my life.  But something in Chester’s eyes drew me in – they told a story of neglect, defeat and sadness. I filled out at application but figured that my chances were slim.  I was thrilled a few days later when the SPCA contacted me to advise that my application was approved and to arrange a meet-and-greet.” 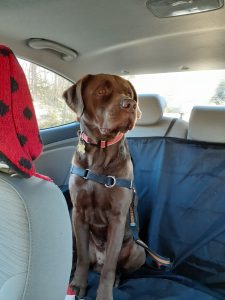 At the shelter, staff discussed with Thia the long-term care that Chester would require.  She relates “It was a bit daunting as a first-time dog parent, but I fell head-over-heels in love with Chester and knew that he and I were meant to be together.  A few days later, I brought him to his new home, along with 3 medications, special shampoo that he needed to be bathed in every 3 days and special food.  I knew that Chester and I could figure things out together.”

There was shared joy as Chester crossed the doorway of his new home.  “He walked into the house like he ran the place!” chuckles Thia. “He claimed a chair as his favorite and was very respectful of my two cats who are 13-year old brothers. They warm up to Chester more every day.” 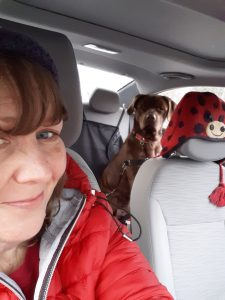 Chester will be on his allergy medication long-term.  Thia explains “He’s a good patient; he’s never been difficult with any of his pills, but still dislikes having his ears touched.  I’m also very careful with his food since he needs to eat a limited-ingredient diet.  We check in with our veterinarian periodically to make sure we’re on-track.” 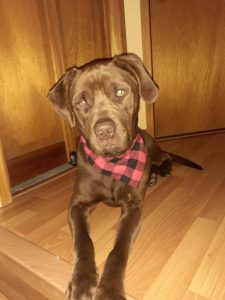 Chester now has the life that he deserves, and his transformation has been remarkable.  He’s happy and doing so much better health-wise.  Chester’s expression in his ‘after’ photo says it all – he realizes he is home, safe and loved.  “Chester loves going for long walks (we’re talking 3-5 kms most days), going for rides in the car and he’d never say no to a good nap,” laughs Thia. “He also loves any toys that involve food!”

Sometimes, amazing transformations work two ways.  Thia exclaims “Not only did Chester convert me to a dog-person, but he’s winning over my friend and walking partner Debora, who was also not a dog-person!  Debora calls him ‘Love with Fur.’  Chester has brought so much love and laughter into my life; I can’t remember what life was like without him.”

Thia shares her thoughts about the SPCA’s role in unlocking the door to a new life for Chester.  “I can’t imagine what would have happened to Chester given the poor condition he was in.  The SPCA stepped in and provided him with all the care and love he needed to start a new life.  They never tired of my endless questions and I have nothing but praise and thanks for their dedication and efforts.”

You can help make a life-changing difference for homeless animals like Chester.  Please donate today.

Prepare for cuteness………..here’s a favorite anecdote from Chester’s fur-mama Thia……….

“Chester really loves to be bathed. This is great since his medicated shampoo has to sit on his fur for 10 minutes.  While we wait for the time to wind down, we play a game of ‘Which hand is the kibble in’? After his first bath, all that I would have to say is “Does Chester want a bath?” and he’d run excitedly to the bathroom, stopping only to make sure the kibble was coming too!”