On November 2nd last year, Mandy Morgan and her parents adopted a deserving dog from the Nova Scotia SPCA. An 8- year old Siberian Husky mix, the shelter had named him Rocky. When they adopted Rocky, the family decided he should have a new name for his new start in life. They called him Loki. 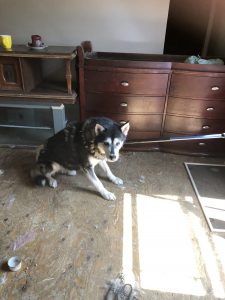 Loki led a sad life before he was rescued by SPCA Cruelty Officers following a complaint in August 2019.  His ‘home’ was a lonely place without love.  He had no soft bed to lie in and no toys. And it got worse. His owners skipped town and abandoned Loki in their rental home.  He was left with no food or water.  When SPCA officers found him, they believe he had been alone for about 2 weeks.  He managed to get some water from a toilet. The home was a disaster and showed his desperate and futile search for something to eat.

Loki was discovered cowering and afraid.  He was weak and could barely stand.  Rescue was just the first step on his road to recovery.  Loki arrived at the Dartmouth shelter stiff and very lethargic.  He was overweight from lack of a healthy diet and exercise and had issues with eating and diarrhea.  His teeth were in poor condition and he needed dental surgery. He was diagnosed with Addison’s disease which requires him to be on medication for the rest of his life.  Emotionally, Loki was fragile.  There were times he would refuse to go back in his kennel.  Some nights, the staff would let him sleep in the office or lunchroom where he felt a little more safe and secure.  He was likely terrified of being left alone again. After 2 weeks of rehabilitation, volunteers were allowed to handle Loki. 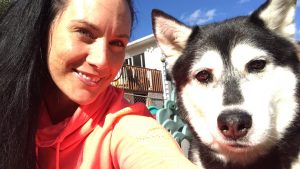 Mandy Morgan, one of the SPCA’s awesome volunteers had fallen in love with Loki at first sight.  Mandy related “I was thrilled when I finally got to take him out in the yard and interact with him.  I was itching to spend time with him and give him snuggles.  Loki’s such a teddy bear.  He just wanted love.”

“I wanted to adopt Loki so badly, but my family has a cat and another Husky mix and Loki was listed as a dog who would ideally go to a home with no other pets,” explained Mandy. “Every Thursday I would go in for my volunteer shift and would fall more in love with him. As the weeks went by and no applications to adopt him came in, I started thinking it was worth a shot submitting one.  Unfortunately, another family with no pets beat me to the punch and so that adoption proceeded. Sadly, things didn’t work out in that situation and Loki ended up back at the shelter.” 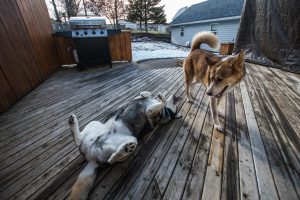 Mandy considered this to be a sign she was meant to adopt Loki. “The staff helped me to do a very gradual introduction between Loki and our other dog Kiya, spread over four different visits.  It didn’t start out overly promising, but luckily, everyone was patient and willing to put in the extra effort.  On the fourth visit, we put them outside together and to everyone’s surprise, they immediately started playing with each other!  It was so heartwarming.  Not only did I get the seal of approval to adopt Loki, I had never seen Kiya play with another dog like that,” said Mandy.

It took a couple of months for Loki to fully acclimate to his new home.  “We made sure to do things slowly and keep barriers up when needed until all three of our pets got comfortable with each other.  Now they all get along great!  Kiya and Loki are best buds, while our cat Bear remains the king of the house!” chuckled Mandy. “For the first few months, Loki was in my bedroom most of the time and followed me everywhere I went.  If I went out, he would be laying by the door waiting for me to get home.  He just wants to be close to someone,” she added. 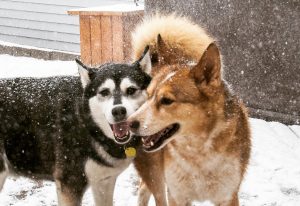 Loki’s favorite things to do? “Eat, eat and eat!” exclaimed Mandy.  “He is very food driven. Loki’s a voluptuous pup so we have to watch how much food and treats we give him.  He also loves going for walks. Kiya, Loki and I try to get out every morning.”  What about taking his medication? “Loki has hypothyroidism and has to take a pill twice a day.  That’s where his love of food comes in handy.  He gets his pill in a little piece of cheese and we never have any issues getting him to take his meds. Quite the opposite really. He can’t wait to get his cheese every day!” laughed Mandy.

To anyone adopting a pet, Mandy urged “Don’t give up on them. Be patient. Like any relationship it takes time to get to know each other and get used to being in a new place with new rules. It also takes work and effort. But it is well worth it knowing you’re a part of their second chance at a happy life! Like Loki, they will return your love every day in so many ways.” 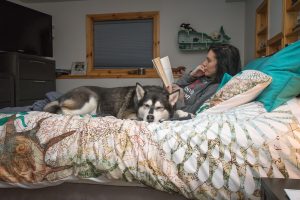 Mandy’s final thoughts?  “The staff at the SPCA are absolutely amazing people! They truly went above and beyond to give Loki a second chance, as they always do.  The extra care and consideration they gave, the attentiveness and patience, helped Loki to transition not only to the shelter but to our home. A special thank you to Kathy, Josh, and Amy for taking extra time to work with me and allowing us the chance to give our amazing boy a forever home.”

In his previous life, Loki woke up to the cold reality of yet another lonely dismal day.  Now he wakes up happy each morning knowing that he is home, safe and well loved.

Please give other homeless animals like Loki a chance to live the life they deserve.  Support the Nova Scotia SPCA in their lifesaving work.

“I volunteer Thursday mornings with the dog care team. A typical morning is pretty busy. We work to quickly get all the pups out to handle their business. While they’re outside we clean their kennels, provide fresh blankets and toys when needed, and make sure each pup gets their breakfast and fresh water. There are always copious amounts of laundry to do, poop to pick up and pups to play with. I wouldn’t want it any other way! It’s so fulfilling volunteering at the SPCA, knowing you’re making even the smallest difference in these animals’ lives.” – Mandy Morgan

Inspired to volunteer or lend a helping paw? Click here.