John Bennet and his partner Marchell Lynk have never been shy about taking on a challenge. And so, when it came to adding another four-legged member to their family, they were ready to do whatever it took to ensure success.

They already had an adopted dog, their handsome 3-year old Staffie-cross Hank. The couple thought that it would be great for Hank to have a younger canine companion so they set about looking for a brother for him. Enter Moose, a one-and-one-half year old Pittie/Rottie mix. Moose came to the Kings SPCA when his owner could not care properly for him any longer. Physically, Moose was in good health, but emotionally, he was fragile; extremely nervous and shy around new people. Moose had been at the shelter for a month waiting for a loving home. Then his life changed. 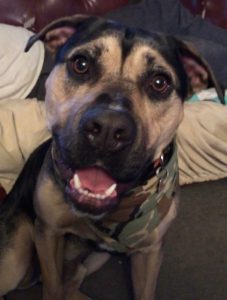 The couple was checking out the Kings Shelter Facebook page when they spotted Moose’s photo. “When we saw Moose’s picture, it was game over,” says John. “I remember the big smile he was wearing and knew we had to meet him.” Marchell adds “Moose’s age was just right and we were already comfortable with Staffie-crosses, since both Hank and our beloved deceased dog Riley before him opened our hearts to this breed.”

John says “When we were introduced to Moose at the shelter, he was very comfortable with Marchell but it took him some time to warm up to me. It wasn’t surprising, since this poor boy’s world had been turned upside down.” The couple knew it would take patience, time and love to build Moose’s trust and confidence, so they made the commitment to visit him every day over the next two weeks. “The Kings Shelter staff were there for us every step of the way, supporting us and providing guidance,” says Marchell. “For the first few days, we went out for a walk and Moose did just fine. Eventually, it was time for Hank and Moose to meet.” John relates “The entire staff at the Kings SPCA were rooting for us. Moose and Hank hit it off and soon we were walking together as a pack. We promised Moose that if he chose us, we’d give him a loving home.” 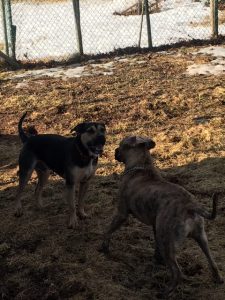 Moose’s transition to his new home has been smooth and he has clearly bonded with his brother Hank.  The couple continues to reinforce socializing skills slowly acknowledging that every animal is different. “We walk off the beaten path so we don’t overwhelm Moose with too many people at once. He needs to feel safe,” John reports. “He is doing much better at meeting new people. We work on manners and obedience every day; Moose is very smart and learns quickly. Both of our boys enjoy car rides, going for walks and playing squeak ball together in our fenced back yard” states Marchell.

The couple has nicknamed their family ‘The 4-Pack.’  John says “It’s incredible for the 4 of us to have come together to fill a place in each other’s hearts. Hank and Moose rescued us as much as we rescued them.” What lesson does Moose’s story teach us? I asked. “Time and patience are key if you want to have a strong trusting bond with an animal, particularly one whose prior life was without the love and kindness they deserve.”

The couple is sad that stereotypes still exist for Staffie breeds. “These dogs are amazing and deserve the same chance at happiness that all dogs do” they state. “Thanks to the Kings SPCA, Moose is now a treasured family member in our 4-Pack!”

Sadly, since this article was written, John passed away. John was dedicated to loving, supporting and caring for homeless animals. He was a true difference-maker and animal-lover. John will be deeply missed by his loved ones and SPCA family.