When Tom and Joan adopted a deserving dog on December 24th last year, they knew he would be a wonderful addition to their family and would fill their home with unconditional love. But they never dreamed that a few short months later, he would become so much more than that. In fact, he ended up saving Joan’s life! Here’s the incredible story. 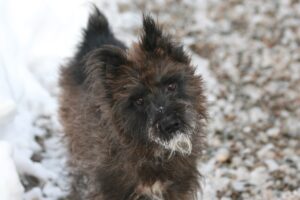 The couple had been looking to adopt a dog when they spotted a photo on the SPCA website that caught their eye. The shelter had named him Ghost. “We were immediately drawn to Ghost’s picture,” said Joan.  “He was so cute, but he looked so sad.” They just knew they had to meet this sweet boy, so they headed to the Dartmouth Shelter to take Ghost for a walk. “During our walk, Ghost kept looking up at us smiling, as if to say ‘Am I doing this right?’ and ‘Do you like me?’ He just melted our hearts. Being the perfect size for us sealed the deal. Ghost was coming home with us.”

“We decided to change Ghost’s name to Toast,” explained Tom. “It wouldn’t be a dramatic change for him, plus we joke that we love having our lazy mornings with our coffee and Toast!” Four-year-old Toast made himself at home within the first 5 minutes of entering the house. “He checked out each room and looked at us as if to say ‘I think I’ll stay.’” 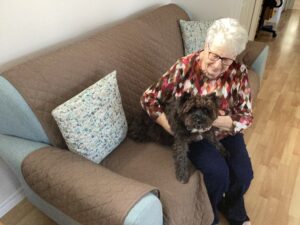 Toast definitely filled the house with love and joy. “We knew he was an amazing boy”, said Joan. One night in March, Toast proved just how amazing he is. Joan shared “I knew I was in big trouble. I was having a terrible time breathing and couldn’t call out for Tom to help. It was very frightening. Toast was beside me and I asked him to go get Dad. He started barking to alert Tom that I was in distress. I was rushed to the hospital by ambulance where they found I had fluid on my lungs and needed immediate open-heart surgery.”

The couple credits Toast with saving Joan’s life. “He is definitely our hero!” they exclaimed. And Toast’s caring attentive nature didn’t stop there. “When Joan came home, Toast helped me to look after her,” related Tom. “We feel such a strong connection to Toast and we will never forget his loyalty and heroism on a very scary night. We are committed to making sure the rest of his life is the best it can possibly be.” 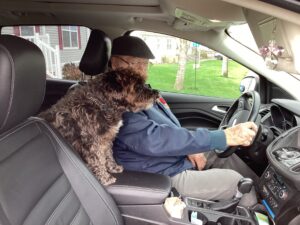 And Toast is definitely living his best life. Joan shared “He loves going for walks and for rides in the car. Playing fetch is high on his list of favorite things to do, as is helping Dad in the shed. In fact, he has ‘adopted’ Dad as the one to follow around 24/7! He is also a great wildlife watcher. We have twin 5-year-old great-granddaughters and Toast adores playing with them. He also has some neighborhood doggie-pals who come over to play.” Toast’s charming personality impresses everyone he meets.He is well-liked at Timmies’ drive-through window and he never fails to welcome all visitors at the couple’s front door.

You might think it was fate that brought Toast into Joan’s life to be her hero. In fact, Toast was brought to the province on wheels of love, formally known as the SPCA’s International Transport Program. 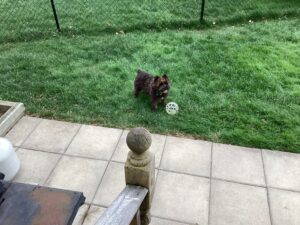 Here’s the scoop behind the program. During certain times of the year, the SPCA experiences a sharp decline in the number of homeless pets in the province – at times, there have been as few as 8 dogs available for adoption in Nova Scotia – and often the SPCA has the ability to help more homeless animals. Since 2019, the SPCA has helped many animal welfare organizations in Canada, transporting and saving more than 500 pets. And if we have this greater ability, why not help more animals?

The international component was launched in August 2021, in collaboration with our American partner, the ASPCA. The needs of Nova Scotia animals and families will ALWAYS come first, but when space and resources allow, the SPCA will safely bring pets into the province from approved U.S. shelters that are overwhelmed with homeless pet over-population. There is no fixed schedule for international transports, so if shelter space is needed for local animals, transports can be delayed until there is room in the SPCA’s shelters again.

The SPCA sets high ethical standards and strict protocols to ensure the health and safety of people and pets – both those being transported and those here in the province. Thanks to a $100,000 grant from Pet Valu, the SPCA was able to purchase an advanced animal transport vehicle custom- designed for pet comfort and safety. It’s definitely a win-win for people and animals!

The couple hopes that sharing Toast’s story will help people realize just how incredible adopted dogs can be. “Toast was the best Christmas present we ever received,” they said. “We are so grateful to the SPCA for this life-saving program. It not only gave Toast a second chance at life but ended up giving Joan a second chance too.”

From Thrown Away to Treasured: Sheldon’s Story

The car slowed down just enough to throw something on the side of the highway, then sped... READ MORE about From Thrown Away to Treasured: Sheldon’s Story