Each one of the precious souls who cross the Nova Scotia SPCA’s doorstep has a story to tell. This story is Henry’s. Sadly, Henry recently made his way to the Rainbow Bridge, but his parents wanted to honor his memory by sharing the love and happiness he brought to their life. 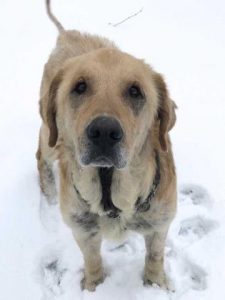 The first 10 years of Henry’s life were not filled with the attention and medical care he needed. Recognizing that they could not care adequately for Henry, his owner made the decision to surrender him to the SPCA. We are grateful that he made this decision because it changed Henry’s life.

Henry was in poor shape when he arrived at the shelter on February 14th, 2019. His skin was inflamed, he was extremely itchy and much of his fur was missing. Over time, with special baths, medications and a special diet, Henry made progress. Because he would need these things on an ongoing basis and in view of his age, he was placed in the SPCA’s Palliative Care Program. Then Henry’s life changed. 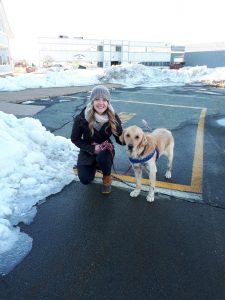 Sarah and her husband Curtis had been planning to adopt a puppy and dropped by the SPCA periodically to walk dogs. Sarah shared, “Walking the dogs allowed us to get our ‘dog fill’ until we could bring a deserving pup home. One evening, we were lucky enough to walk Henry!”

Henry definitely melted the couple’s hearts. “Despite being half bald and itchy, Henry was such a lovable goofball,” related Sarah. “You could tell he had so much love to give. We left the shelter talking about how sweet he was but thinking there was no way we could adopt a dog who would need so much care. But we couldn’t stop thinking about him and we returned for a second walk the next day.” 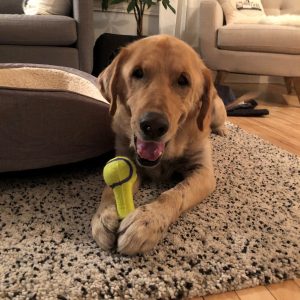 “We had never fostered a palliative care pet before and wanted to ensure that we could give Henry the care and support he needed,” Curtis stated. “SPCA staff thoroughly explained the Palliative Care Program to us. We realized that we would have continual support from the SPCA throughout Henry’s time with us and that we didn’t need to worry about the potential financial burden that can sometimes occur when caring for a dog with complex medical needs.”

On March 14th, the couple decided to open their hearts and home to Henry as forever foster parents. They chuckled, “Henry adjusted to his new home immediately! He marched in, found his new toys and immediately started playing. He then plunked into his bed and had a good snooze!” 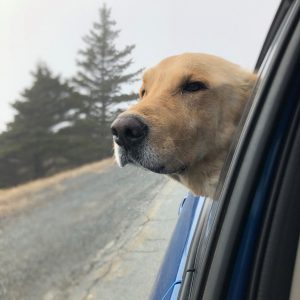 Henry thrived in his new home. Sarah shared, “He loved going for car rides, which is interesting since he initially had a lot of anxiety riding in the car. But he quickly realized that getting in the car usually meant good things! He also loved the beach. We always had him on a leash since he was a ‘flight risk,’ but he loved to bound down the sand with Curtis. Despite being part Lab, Henry didn’t like to swim! When we went in the water, we’d put him on a long lead so he had the option to stay on shore if he chose to. He’d always paddle out to us to make sure we were ok, then immediately hightail it back to land!” 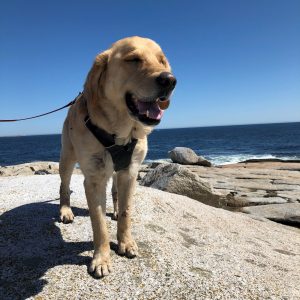 “Henry was such an important member of our family,” said Sarah. “He and our son were true buddies. When Charlie was sick or feeling down, Henry would snuggle with him. The way that Henry interacted with Charlie is something we’ll never forget. He was so patient and loving. Most photos we’ve taken of our son have Henry in the background somewhere.” 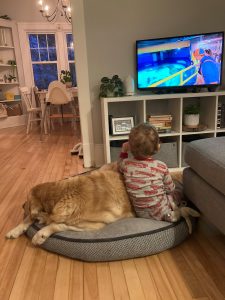 Henry’s care included medicated baths 3 times/week which tapered down to 1 every 2 weeks over time. Curtis explained “He was very tolerant of his baths and would jump into the tub with a little encouragement. He sat patiently while we blow-dried his fur and ‘neck flap’ which would get infected if it wasn’t dried thoroughly. He was on daily meds which we mixed with his food and he got daily ear drops. He did amazing with both. He never whined or complained even when he had an open sore or infection. The biggest challenge was getting a particular foul-smelling antibiotic into him. He could always sniff those pills out and spit them out!”

Sarah stated, “The SPCA was amazing – the love and support they showed for Henry, as well as us, was what kept us going through all the baths, medications and infections. It would have been challenging not only to pay for his ongoing medical needs, but also to readily get appointments with the vet. With the SPCA, it was always a relief to know that Henry would get the care he needed quickly, and from familiar faces who he felt comfortable with. Henry would actually get excited every time we brought him in for an appointment!”

“Fostering Henry brought so much joy to our life,” exclaimed Curtis. “He was a great companion and he got us out of the house on a regular basis for walks which I’m sure benefited our health. It was also an excellent learning experience regarding dog ownership, and we are undoubtedly in a better position now to understand what it takes, or can take, to be a responsible dog owner.” 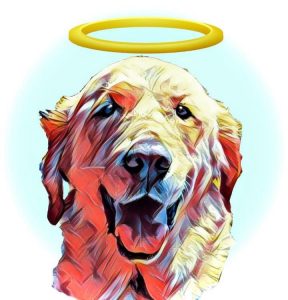 The couple shared, “When we brought Henry home, we thought we’d have a year with him at the most. We felt very fortunate to have him for three wonderful years. We knew when signed up to be his forever fosters that his time with us would be short, but we also knew he had a lifetime of love to give. Losing a pet is so hard, but fostering Henry was certainly worth the inevitable pain. Living in the moment is absolutely something he taught us.” 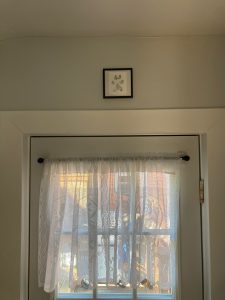 Henry passed away on April 8th in the arms of his foster parents, wagging his tail to the end, knowing that he was loved and that he mattered. He not only left paw prints on his parents’ hearts, but in their home as well. Curtis said “The SPCA kindly sent us Henry’s paw prints after he passed. We framed them and put them above our door to remind us of Henry when we’re coming and going; the door at which Henry would eagerly await his next walk or adventure. We also commissioned a painting of Henry by Sarah Jane Gilks when she was donating a portion of her pet portrait proceeds to the SPCA. His portrait will always hold a place of honour in our home.” 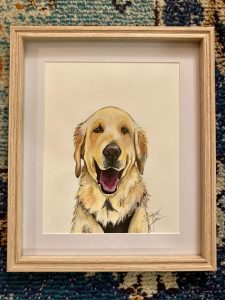 Please give a round of ‘ap-paws’ to the Nova Scotia SPCA Palliative Care Program. The program is a proud reflection of the SPCA’s no-kill policy.

Your generous support gives animals like Henry a second chance at a happy life. To learn more about this life-changing program and how you can help, click here.