“We’re going home with a Malinois, aren’t we?” Paul’s wife, Karen, laughed. She knew even before Paul had reached his decision that was no turning back. Fate had brought them together. 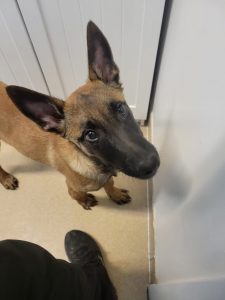 A few days prior, Paul had been sent a link to Xave’s photo on the Colchester SPCA Facebook page. Although Paul and Karen had almost always had a two-dog home, they didn’t feel ready after their retired Search and Rescue dog passed away. Plus, their six-year-old German Shepherd, Cinder, made sure to keep them on their toes.

“I floated the concept of the Malinois at the SPCA to Karen,” Paul recalled. “After some intense negotiation, we decided to visit Xave on Saturday. As much as I wanted a new dog for Search and Rescue, Karen wanted a dog that she could take to the cottage and for walks with friends. We needed to find the right dog that would be confident in both situations.” 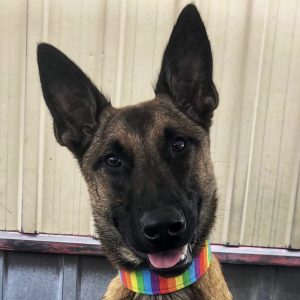 “The American Federal Emergency Management Agency (FEMA) created a suitability assessment that allows Search and Rescue dog handlers to look at shelter dogs and see if they have the characteristics needed to be a potential Urban Search and Rescue dog,” Paul explained. With this test and a tracking harness to assess Xave’s natural drives, Paul and Karen headed to the shelter.

To their surprise, Xave was much younger than expected.

“I realized the assessment or tracking tests weren’t appropriate for his age,” Paul shared. “I then focused on his play – seeing if he wanted to play with different toys and how he was for social ability. His strong desire to play combined with his super confident demeanor and enthusiastic willingness to greet everyone (with kisses) at the shelter made me realize we had a solid candidate.”

Paul and Karen made it official! They adopted Xave and welcomed him into their home. 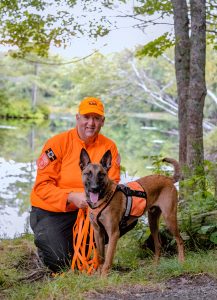 Once Xave was settled, they started training.

“My goal is to validate Xave as an RCMP Civilian Search and Rescue dog with Halifax Search and Rescue next spring,” Paul said. “The dog needs to be able to complete a 2km track, finding up to four discarded articles along the way. They will then complete a series of area searches during both the day and night for articles and people.”

If Xave passes, he has the ability to be deployed on missing person cases when ground Search and Rescue teams are deployed. Whether it is finding a lost person or responding to a crisis, Xave would be ready to spring into action. 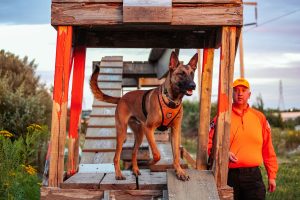 “Search and Rescue dogs are a special combination of dog,” Paul explained. “They need to be highly socialized with people, neutral around other animals, and the missing person needs to be the most important priority to the dog! Not all searches end happily. The best Search and Rescue dogs I’ve worked with are the dogs that are willing to put their whole heart into the search and then be willing to serve the role of a therapy dog when needed.”

Although he isn’t certified yet, Xave has proved he has what it takes. 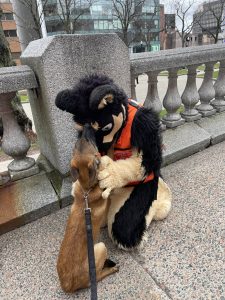 “Earlier this year we responded to a Search and Rescue call… the call didn’t go as we all hoped,” Paul said sadly. “After the search was stood down, we called the Critical Incident Stress Team with Halifax Regional Fire & Emergency for a debrief. While their team (with their therapy dog) offered an amazing response time that night, our members were tired and wanted to go home. I brought Xave out of my truck to visit with the team. While Xave can be super energetic, that night he was chill as he visited with those that wanted to see him. He might not have been there as a therapy dog, but that night he definitely understood the assignment.” 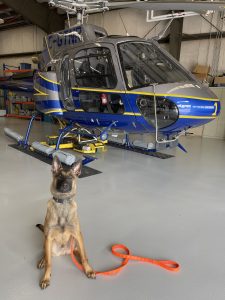 Xave learns new skills every single day. He has shown that he has strong natural tracking abilities and the social requirements needed for success. “Xave has been to see helicopters, been around boats, met lots of new human friends, and eagerly goes to doggy daycare one day a week,” Paul smiled. “We’ve gone to different places – he plays on our rubble pile and working dog agility course, and been beside excavators and heavy equipment as they’ve worked.” 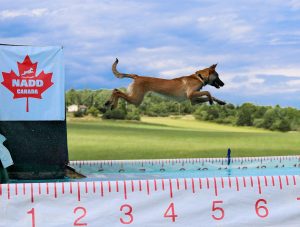 “It’s not all work!” Paul assured. “Xave has also been out a few times with my mushing friends (dog running) and we will participate in Canicross and bikejoring when he’s fully developed. Until then, we’re having lots of fun beating the heat by swimming and dock diving – things that are easy on a developing puppy but keep him active.” Xave is excelling at dock diving – he recently cleared a 23’ jump in to the pool during a competition.

Paul and Karen are so thankful to have Xave in their life. But just as much, they are grateful that Xave’s old owner reached out to the SPCA for help. 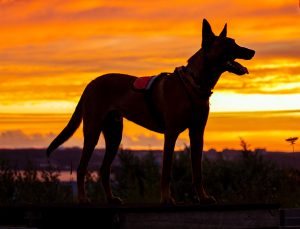 “What I recognize more about the adoption process is the selfless actions of the individuals that first owned Xave,” Paul shared. “They took Xave into their lives with a full set of dreams and ambitions for a future life with him. When they realized the true challenges that a Malinois brings, they made the hard decision to surrender Xave to the SPCA. This placed him in a system where the whole team truly cared about his well-being and looked for a good home for him. The stars aligned with Xave and we are very fortunate to have him as part of our family. Having that safety net in place, with people who truly care for animals is critical for the well being of animals in the province.”

“Malinois are synonymous with police and special forces dogs,” he continued. “I never realized how dedicated and loyal they are to their entire family unit. He can be playing in the house one minute, and then will launch into your lap when he needs a hug. If there’s anything we’ve learned from Xave, it’s a refresher on love.”

Xave is proof that with patience, training, and lots of love, there are no limits to what shelter dogs can accomplish. Soon enough, if fate allows, Xave will go from being a rescued pup to rescuer.